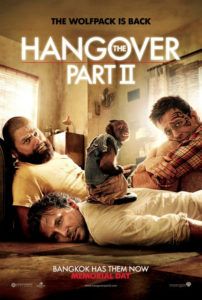 In Die Hard 2: Die Harder, John McClane quipped “How can the same shit happen to the same guy twice?” The answer is simple: Because it’s easier for Hollywood to replicate a proven formula than create something innovative which risks challenging its established audience. And although The Hangover Part II doesn’t feature an equally lame subtitle like “Even More Hungover” or “Really Hanging”, the result is just as redundant. Director Todd Phillips has made yet another rude awakening movie, this time the setting moved from Las Vegas to Bangkok, and co-writers Craig Mazin (Scary Movie 3) and Scot Armstrong (Old School) regurgitate the same material with explicit laziness.

Early in the movie, there’s even an analogous scene when cocky partyman Phil (Bradley Cooper) says, resignedly, “It happened again…” Later, bland dentist Stu (Ed Helms) shouts the same thing with his pervasive, panicked tone. Even the passive aggressive weirdo, Alan (Zach Galifianakis), remarks how similar their experiences in the sequel are to the original. If the characters in the movie can’t get over how annoyingly parallel the sequel is to the original, how is the audience expected to? Indeed, the sequel’s creators stick to the template of The Hangover, as they’re better at conceiving debauchery-laden mishaps than an inventive story to string them together.

Yet again, a bachelor party celebration goes horribly wrong when after a single beer toast, the “Wolfpack” wakes up in a dank hotel room the next morning. This time, it’s Stu who’s getting married (to Jamie Chung) in the bride’s homeland, and his future brother-in-law, the 16-year-old Teddy (Mason Lee), who goes missing. The leader of sorts, Phil, continues his too-cool-for-school act, while Alan looks less like a mad bomber and more like a serial killer with his shaggy hairdo shaved to the skin. Following the plot of the first in predicable ways, the threesome once more attempts to figure out what happened the night before and return Teddy to safety. The screenwriters also find another reason not to include Justin Bartha, whose character Doug went missing in the first. Wouldn’t it have been more interesting if Bartha was included on this go-round and was revealed to be the raunchiest or wildest of the bunch? Instead, he’s reduced to cutaway cell phone scenes.

All the same things happen as in the original movie, while mere details have changed: Stu’s chipped tooth is replaced by a facial tattoo; the tagalong baby (or tiger) is replaced by a capuchin monkey; Stu sings a song with guitar instead of piano; Alan’s choice of narcotic to drug his friends is altered; Stu sleeps with a Bangkok whore instead of a Las Vegas prostitute. And so on. In a way, the situations are funnier because the trio is even more out of their element in a foreign land; however, the locale never becomes more than an extended stereotype involving every story you’ve ever heard about Bangkok. Take the obnoxious approach of the why-is-he-back? gangster Mr. Chow (Ken Jeong), who just-so-happens to be in Bangkok too, and finds yet another reason to bear his man-parts onscreen. Jeong has more screentime in this movie, and you’ll either think that’s a good thing or a bad thing. I’m in the latter camp.

The grotesqueries have almost no limits here, many of them very funny, but all of them in the range of gross-out or shock humor, as opposed to—oh, I don’t know—wit. This brand of comedy makes the initial viewing hilarious, complete with many celebrity cameos, but once we know what’s coming, there’s no reason to watch again. Nevertheless, audiences want to see a disgusting spectacle, and that’s why this movie will do well. Indeed, it’s a raunchy movie—a very, very raunchy movie. Enough so that it’s obvious Phillips and Co. intended to push the boundaries of mainstream censorship. (Consider how Galifianakis dwells on the coolness of smoking, whereas smoking cigarettes is enough to earn a PG-13 rating these days.) I suspect, had the original not made nearly $500 million in worldwide grosses, and not become the most successful R-rated comedy of all time, this film may have earned an NC-17 from the MPAA. But money buys exceptions in Hollywood, and Warner Bros. and Phillips have assured their follow-up’s commercial success by topping their original in the crudity department.

Shock-based laughs were forgivable with The Hangover given the novelty of the concept, but there’s no pardoning the do-over feel of this sequel. This review contains a whole lot of “yet again” and “once more” statements, and that about sums up the approach to The Hangover Part II. Giving audiences what they want is one thing, but servicing them with this recycled plot is insulting. Audiences will realize this, I hope, and make the inevitable third movie not only a harder sell, but hopefully a better movie for it. Then again, this comedy is borderline critic-proof and almost assured to take in ridiculous receipts over its Memorial Day weekend opening, in turn proving that formula turns a profit, especially in the summer. Certainly, Galifianakis’ performance alone delivers enough laughs to make seeing the movie worthwhile, but overall the chuckles throughout the theater will be less frequent than hoped for.