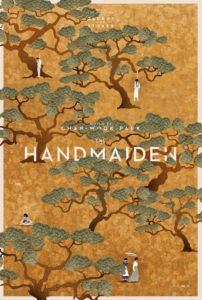 Park Chan-wook’s The Handmaiden envelops the viewer in a clever con game of psychological duplicity, depraved predators, dark humor, and sordid sexual delights. Delivered as only this South Korean auteur could, the film is sophisticated and beautifully made. It comes with a potency behind every delivered sensation, whether it’s the sumptuous visual aesthetics or the multi-layered plot involving larceny and erotic pleasures, which range from merely taboo to perverse. The film is foremost a love story, labyrinthine though it may be, told through complex characters entangled in an operatic period romance that mated with a psychosexual thriller. To call The Handmaiden multi-layered would be far too simple given its general knottiness, and also since it achieves an unlikely symmetry between art and entertainment, empathy and expression, grandeur and seediness. In the face of it all, the film holds up under intellectual scrutiny, presenting a pastiche of assorted genres in a sublime, uncommon experience.

Freely adapted from Sarah Waters’ 2002 novel Fingersmith set in Victorian England, Park maintains the book’s three-part structure but moves the story to Japanese-occupied Korea in the 1930s. In the first part, the story involves an elaborate fraud in which a seasoned Korean con man (Ha Jung-woo) poses as a Japanese aristocrat named Count Fujiwara. Under his alternate identity, Fujiwara plans to seduce Hideko (Kim Min-hee), a Japanese heiress living with her Korean uncle Kouzuki (Cho Jin-woong), a rich book collector secluded in an impressive estate. Although Kouzuki intends to marry his privileged niece, Fujiwara arranges the lowly pickpocket Tamako (Kim Tae-ri) to serve as Hideko’s handmaiden under the name Sookee. Having come from a gang of thieves, the newly named Sookee has been tasked with convincing Hideko to fall for Fujiwara, instead of her uncle, which is no stretch. 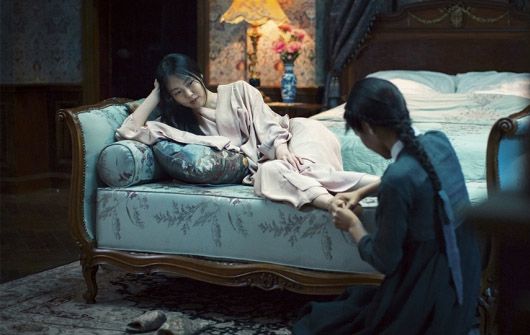 Sookee prides herself as a cunning thief, but she’s unprepared for the nest of vipers to which she’s submitted herself. Fujiwara’s contemptible, barefaced villainy comes in waves of delicious dialogue: “I’m not that interested in money itself,” he says over dinner. “What I desire is… How shall I put it? The manner of ordering wine without looking at the price.” To accomplish this, Fujiwara has learned the craft of art forgery and studied his target well, fully aware of the hidden passages and peep holes concealed inside the Kouzuki estate. Meanwhile, Hideko seems naïve, raised in isolation under the rigid tutelage of her uncle. She needs Sookee and clings to her, relying on her for advice on how to deal with Fujiwara courting her, as he remains on the estate under the auspices of teaching Hideko how to paint. But then, there’s far more to Hideko than her outwardly untried quality.

At the same time, Sookee begins to fall for her mark. She and Hideko begin a passionate association, which must be kept under wraps given Hideko’s planned marriage to her uncle, as well as the conspired coupling with Fujiwara. Park playfully introduces their mutual attraction in one of the film’s most sensuous scenes. When Hideko cuts her cheek on her tooth while in the bath, Sookee fetches a thimble and, placing it on her thumb, proceeds to file down Hideko’s sharp tooth. This sexually loaded scene might be accused of fetishism, except nothing in The Handmaiden is so simple or single-layered. As the film’s second part begins, Park develops these characters in unexpected ways, just as the third part progresses them even further. In the last two-thirds, Park returns to the bathtub scene, and several other scenes from the first part, as their meanings have been loaded even further given everything that occurs in-between.

Over the course of the film, Park gradually unveils the true nature of his characters, each of whom occupies multiple layers of predatory deception, secrecy, and desire. The above descriptions of these characters are just the beginning. This is true of the plot as well. Within each of the film’s three parts, a new level of the character becomes clear, as does a new dimension of the story’s cleverly bound, ever-unfolding scheme—and always in unexpected ways. As the story goes on for more than two breathless hours, the characters are reduced to their raw selves. In some cases, the story steadily reveals the horrifying truths, cruelty, or perversions driving a character; elsewhere, the story allows certain characters to stop acting behind a façade and finally be themselves. Watching these progressions and transformations take place can prove shocking, twisty, but eventually endearing. To be sure, Park ends the film on a lovely note, and without it, the experience might be exhaustively punishing and more aligned with the titles in his Vengeance Trilogy. 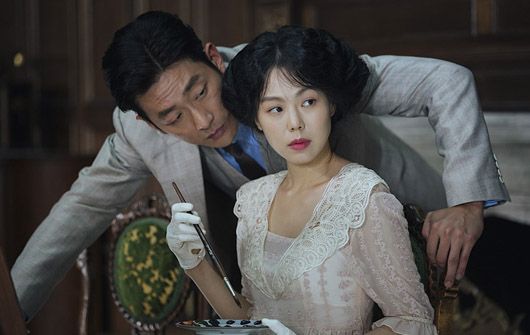 The book collector’s expansive country estate is another central character in The Handmaiden, and it lends a splendor and mystery to the proceedings. The ornately designed mansion contains elements of traditional Eastern architecture, but Park also incorporates elements of English design. The building itself has a similar Gothic mystery attributed to Manderley from Alfred Hitchcock’s Rebecca (1940) or, more recently, the dilapidated manor in Guillermo del Toro’s Crimson Peak (2015). Bedrooms are enclosed in thin shoji sliding doors, behind which all manner of moans and pleas can be heard, while secrets hide underneath the paneled tatami flooring in the book collector’s library. A long path of bookshelves precedes the library’s sunken auditorium space; unwanted visitors are greeted by a life-size cobra statue and a metal gate Kouzuki controls by switch from within. Most salacious remains Kouzuki’s basement beneath the tatami, containing horrors that, when revealed, disturb the imagination.

Along with the plotting and characters, the book collector’s estate becomes representative of Park’s particular brand of cultural amalgamation, which blends Western influences into a pointedly Eastern story with an originality not achieved since Akira Kurosawa (Seven Samurai). And much like Kurosawa or even the work of Japanese animator Hayao Miyazaki (Kiki’s Delivery Service), Park demonstrates his Anglophile tendencies within his work, as well as his worldliness. He draws from sources such as literature and fine arts spanning several countries and disciplines, giving the attentive viewer plenty to decipher in subsequent screenings. By embracing the basic situations of an atmospheric, decidedly British period romance such as Gaslight or even Jane Eyre, yet accenting them with qualities all his own, he creates a post-modern wonder, and arguably his best film since Oldboy in 2003.

Without over-explaining the details of the story, those familiar with Park’s brand of storytelling can expect the expressive way in which the filmmaker paints in strokes of violence and sexuality to achieve a highly metaphoric and emotional purpose. The film’s final third contains the most graphic displays; however, The Handmaiden should not be accused of exploitation or gratuitousness. Its use of extreme elements has a symmetry with the story that Park balances elegantly. It’s intimate and many-sided sex scenes have a consequence on the characters, in a way recalling Ang Lee’s NC-17 rated drama Lust, Caution (2007) and its treatment of intercourse like a bodily conversation. In another aspect of the film, Park uses sadomasochism to disturb us to an uncomfortable degree that, for one character, defines sexuality as a morbid thing to which she holds no emotional connection (initially, anyway). Moreover, the vile illustrations painted in Kouzuki’s endless volumes of ancient pornography, and the staged readings he holds for groups of buyers, lend a baseness to everything that comes before.

Indeed, the film does not allow passive viewing; rather, every scene engages our senses, emotions, and gut reactions. Along with the vibrancy of the subjects onscreen, The Handmaiden looks gorgeous and meticulously crafted in its formal presentation. The luscious and painterly lensing by cinematographer Chung Chung-hoon is rendered through lively and striking cuts by editor Kim Sang-bum, delivering that often-unexpected humor that Park embeds into his work. Cho Young-wuk’s score never threatens to trivialize the material; instead, the theatricality of the music aligns with the traditionally melodramatic tenor of the story. One gets the sense that if Douglas Sirk was making films today, he would make them like this.

With several twisted tales to his name, Park’s incredible artistry and narrative complexities are often overlooked for the visceral quality of his cinema. Given its use of sexuality and violence, some viewers may be tempted to write-off the material as a ploy for kink or shock value, but just as Martin Scorsese or Quentin Tarantino paint in brushstrokes of red, Park’s particular tone balances the onscreen expressiveness with the heightened emotional states of his characters. What remains most impressive is how, despite the material’s potential to misplace the viewer through its more corrupted and confronting means, Park never forgets about the central love story or delivering an ending that will gratify his audience. And while a single viewing of The Handmaiden may not be enough to appreciate the intricacy of these characters or the byzantine journey they take, revisiting the detailed, rapturous, and mesmerizing world of the film would be a rare kind of pleasure.