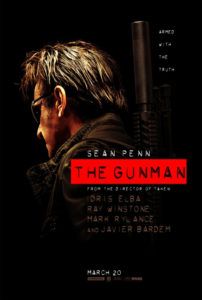 The glaring political agenda of The Gunman, a thriller directed by Pierre Morel, can almost certainly be attributed to its star, producer, and co-writer Sean Penn. No stranger to humanitarian efforts and political showboating, Penn turns gun-totting action into a none-too-subtle (and noble) commentary against major corporations exercising their often-amoral influence in Africa’s mining regions. In more Hollywood-specific terms, the film also places a bid to make Penn into a middle-aged action star akin to Liam Neeson’s recent career overhaul, beginning with Taken, which Morel also directed. Unfortunately, no matter how many beautiful locations are served up by the globetrotting plot, or how pumped-up Penn may look, the story is very familiar stuff, but without anything to set it apart.

Not even an impressive supporting cast consisting of Javier Bardem, Ray Winstone, and Idris Elba can help Penn’s project. Each actor is underused in a story based on the 1981 novel The Prone Gunman, by Jean-Patrick Manchette. It begins in Africa, specifically in the Democratic Republic of Congo, albeit in 2006, where Penn’s Jim Terrier works for a private security company to protect mining operations. But he’s also working alongside several associates as a hitman for a mercenary group, among them Felix (Bardem) and Cox (Mark Rylance). When Jim is assigned to assassinate the minister of mining and leave the country afterward, he must leave behind his doctor girlfriend Annie (Jasmine Trinca), for whom Felix carries a torch.

Years later, Jim finds himself back in Africa, serving his own penance for his past misdeeds by digging wells for locals. When a group of men targets him, he quickly disposes of them. Jim heads to London to find out who ordered the hit and looks up his former mercenary pals, but all except Cox and Felix are dead. Cox doesn’t know anything about the recent activity, except that everyone is dead, apart from Felix, who now lives in Barcelona. To get in under the radar, Jim seeks the help of his rugged pal Stanley (Winstone), who sneaks Jim into Spain. There, Jim finds Felix and Annie unhappily married, him a well-to-do businessman and her longing for Jim’s return. And while Felix’s duplicitous, slimy behavior would suggest he’s the mastermind behind Jim’s would-be assassination, the film quickly takes another direction, putting Jim and Annie on the run from dangerous hired goons.

On the margins, audiences are introduced to Barnes (Elba), an Interpol agent who offers Jim some cryptic assistance, which almost certainly provides a form of deus ex machina later on. Also on the margins is a subplot about Jim’s cumulative, concussive head trauma from years of loud guns and explosions—it’s left him forgetful and prone to dramatically inconvenient headaches and blurry vision. More than once in the film, Jim struggles to maintain an eye on his target and take the shot. It’s an obvious physical manifestation and dreary metaphor for his guilt, but the guilt itself isn’t fully explored by the script—only by Penn’s saddened eyes. Regardless, the viewer pays less attention to Penn’s weary expressions than his tanned, leathery skin and his bulging physique, showcased by a half-dozen shirtless scenes.

By the time the climax rolls around and disposes of the main villain in a silly way (running of the bull), The Gunman shows its true colors as a lowbrow actioner. Sure, shootouts and hand-to-hand combat are shot effectively enough, but it’s difficult to have sympathy for Penn’s moody anti-hero character. Everything works out quite conveniently for him, despite all odds, and in the last shot, Morel zooms close to one of the film’s intermittent news broadcasts soapboxing about the evils of Big Business in Africa. Now, this critic is more anti-authoritarian than most, but so blatantly putting forth your message in the form of a dull actioner isn’t the most graceful way of getting your point across. Penn and his co-writers Don MacPherson (The Avengers, from 1998) and Pete Travis (Dredd) rely on tired action movie tropes to propel their commentary, but the former only cheapens the latter.