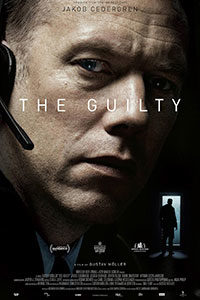 The Guilty seems to exist so critics can use the word “taut” to describe its thrills. Indeed, this is the very definition of a taut thriller in the pull quote style of film criticism. It’s lean, efficient storytelling accomplished by elegant, no-frills filmmaking. The breathless scenario keeps you at the edge of your seat, clinging to every word that might reveal more information about a tense set of circumstances that unfold before our eyes. It’s the kind of film that makes a writer want to use descriptive clichés because, in this case, they’re true. Swedish director Gustav Möller makes his feature film debut with an incredibly controlled exercise in how necessity breeds invention. With a budget of half a million and locations limited to a few hundred square feet, Möller pushes his limited toolkit to its limit. He’s smart enough to know the best tool at his disposal is the audience’s imagination, and he exploits that with masterful control of his craft.

Set in Denmark’s capital of Copenhagen, the story, written by Möller and Emil Nygaard Albertsen, finds Asger Holm (Jakob Cedergren, who looks like a young George Kennedy) working in an emergency services call center. A police officer on temporary assignment pending an investigation into a shooting, Asger answers dispatch calls, indifferent to their banality. The first call we hear him take involves a drug overdose. Asger lectures the caller, taking a humorous pleasure in passing judgment: “That’s your fault, isn’t it?” he says, before hanging up. On another call, a man reports that he’s been robbed by a woman who stole his laptop when they were in his car. Asger finds out the man is located in the Red Light District and, after quickly surmising a prostitute robbed him, resolves to send a squad car, albeit slowly. Asger isn’t just doing his job; he’s using his experience to moralize every situation according to his own rule of law.

Asger just needs to get through the night, and in the morning, there’s a hearing to determine if he can return to active duty. We gather that he’s arranged it so the hearing will go well. In the meantime, he answers calls, avoids the press, and finds himself lost in thousand-yard stares into Alka-Seltzer fizzing in a glass, as troubled movie cops often do. All at once, he receives a call from Iben (Jessica Dinnage), a woman on a cell phone who claims she’s in a van and has been kidnapped by her ex-husband. We listen to the voices in Asger’s headset: Iben’s muffled crying; the sounds of the road; and her ex, Michael (Johan Olsen), talking in the background. She’s afraid to speak much or give details to Asger, as the kidnapper thinks she’s speaking to her daughter, the six-year-old Matilde, and so Asger and Iben work out a code to communicate. Suddenly invested in a high-stakes situation, Asger promises to help. He navigates his computer database and dispatch for assistance, issuing orders that he’s no longer authorized to give as he interprets a situation he does not fully understand; he only thinks he does. But to say any more about the central case would do you a gross disservice.

If the basic set-up sounds familiar, you’re probably thinking of The Call from 2013, a similarly structured yarn that featured Halle Berry as a 911 operator who helps track down a kidnapping victim. Where The Guilty differentiates itself is Möller’s devotion to the limited space. Even though all the troubles of Copenhagen and the surrounding area seem to filter through Asger’s headset and into his ear, he’s isolated in a world of his own making—and it’s a setting that amplifies his mistakes. Not only does Möller avoid cutting away to the goings-on elsewhere in the story, but he refuses to telegraph what exactly is going on in Asger’s head also. Other, similar films that involve call center workers dealing with a particularly bad call—The Taking of Pelham One Two Three (1974) and its 2009 remake come to mind—often involve the employee inevitably leaving the office to save the day, or the director uses cutaways and flashbacks to break up the visual monotony. The late Larry Cohen wrote two scripts involving desperate, revelatory phone calls, but Phone Booth (2002) and Cellular (2002) each became bored with their hook. The Guilty realizes the full potential of its concept with uncompromising commitment. 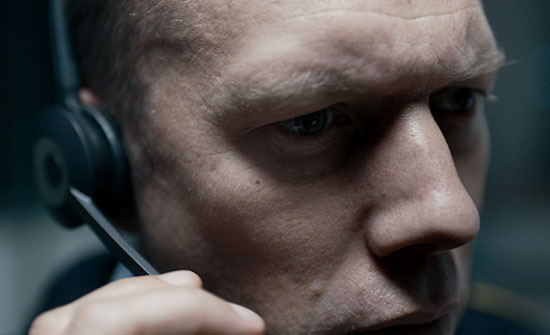 Möller knows that the most exciting things happening in the film have been brilliantly captured on Cedergren’s face, and so he keeps the camera there. Visually, the director and his cinematographer Jasper Spanning avoid the flashy editing or erratic camerawork that a Hollywood production must use to spice up the otherwise limited scope of the material. Much of it is filmed in medium shots and close-ups of Asger’s face in shallow focus. We watch as he reacts to the voices on the other end of the line. Sometimes he sits unmoving, listening to the caller, and these scenes have an infectious quality. You might find yourself watching the film and imitating Asger’s frozen posture, careful not to make a noise so that you can hear every last word and learn every detail, which become increasingly horrific and shocking. Part of Asger’s carefully constructed journey involves certain revelations concerning his assumptions about the people he’s talking to, as well as his role and responsibilities as a police officer. If there’s a moral lesson here, it might be about cops who resolve to issue justice before having all the facts of a situation.

But the kidnapping plot is hardly central to The Guilty; it’s a device through which Möller explores his main character. The script drops kernels of information about Asger so that, through the course of the brisk 85-minute runtime, there’s rarely a bout of awkward exposition or forced character development. Every interaction and phone call deepens Asger’s character, gradually revealing details about his life and his past behavior. If not for the kidnapping thread, the closest comparison to the film might be the British drama Locke (2013), featuring Tom Hardy in a solo performance as a businessman driving from Birmingham to London as his life falls apart over a series of desperate personal and business calls. If there’s a contrivance to the film, it’s that the kidnapping call allows Asger to grapple with his issues of responsibility and regret in a most screenwriter-ly way. Nevertheless, it’s a tightly wound film that does the most with what it has. It would make a great work of theater. Above all, Möller and his sound team have used a small cast of voice actors and sharp sound design to stunning effect. The aural elements are powerful enough that, because of the film’s minimalist visual approach, they disrupt yet enhance all else.

Despite the film taking place in a few drab rooms filled with computer monitors and coworkers out of focus in the background, it somehow manages to be uncommonly engaging. Möller allows his audience to serve as a detective, assembling a complex puzzle; a police shrink, diagnosing Asger’s conscience; and a helpless witness, listening to gasp-worthy crimes on the other end of an untraceable call. We seem to port into Asger, listening with fascination and dread, experiencing it through him. What’s fascinating is how The Guilty manages so fully to situate the audience in Asger’s perspective that the twists and turns of the plot shake us, just as they do him, all through the power of sound and subtle use of staid visuals. Our imaginations, both Asger’s and our own, do the work, and that’s part of the problem, for Asger anyway. If the film were merely a taut thriller, we wouldn’t feel so exhausted when it’s over. By the end, our emotions have been pulled and stretched in unexpected directions, and it’s all been accomplished with an admirable skill behind the filmmaking that exercises a certain bravado in its restraint.

(Editor’s Note: This review was suggested and commissioned on Patreon by Martha. Thank you for your continued support!)