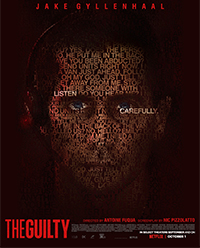 If you’re going to make a movie during a pandemic, why not remake Gustav Möller’s The Guilty (Den skyldige), the 2018 Danish thriller about a breathless 911 call? There’s minimal risk involved. The movie is contained in a few rooms inside an emergency services call center. Most of the actors perform their roles over the phone or remain socially distanced due to the call center layout. The onscreen action centers on a disgraced cop who, while on trial for a shooting, has been reprimanded to dispatch work. Our protagonist takes a series of banal calls until a woman claims she’s been kidnapped. The officer uses his knowledge of police procedures to maneuver around technology and police bureaucracy, going above and beyond his duties as an operator to save the woman’s life. That’s part of the problem, as it turns out. But the material lends itself to the logistics of a pandemic production: Most of the action takes place on a single actor’s face. The camerawork and editing are unfussy. It’s a simple, efficient idea for a movie, and Möller’s taut original perfectly handled its less-is-more approach.

Director Antoine Fuqua shot his version, also called The Guilty, over 11 days in 2020, and the movie debuted on Netflix. No stranger to remakes (see The Equalizer or The Magnificent Seven), Fuqua’s take is almost identical to the original, except for a few choices that make the new version a distinctly Hollywood product. For starters, the original cost about half a million dollars, and doubtless, that amount probably doesn’t even cover the salary of the remake’s star, Jake Gyllenhaal. Most of the supporting cast, too, includes well-known performers such as Riley Keough, Peter Sarsgaard, Eli Goree, Paul Dano, Da’Vine Joy Randolph, and Ethan Hawke on the phone. Fuqua spared no expense for their voicework. The drab call center rooms in the original have been replaced with slick computer screens and headsets that look expensive. The room itself features a wall of television screens, which show news of California wildfires spreading across the landscape.

Fuqua’s treatment is big and unsubtle, even though the story takes the same basic trajectory. Gyllenhaal’s Joe Baylor resents handling emergency calls. Detached from callers by technology, he passes moral judgment on those he deems beneath his time. But the screenplay by Nic Pizzolatto takes liberally from Möller’s version, right down to a junkie calling in because the drugs he took are making him feel like he can’t breathe, and Joe telling him, “That’s your fault, isn’t it?” When Joe finally takes a call from a kidnappee named Emily (Keough), who claims her ex-con ex-husband Henry (Sarsgaard) has trapped her in his van, the events unfold almost the same way as the original’s did. Calling in favors from his allies on the force, Joe sends officers to Emily’s house to check on her two small children. He also sends a cop friend to kick down Henry’s door to look for clues. Watching Gyllenhaal in reaction mode as he listens intently to what’s happening on the other end of the line is undeniably fascinating. But his performance is larger than Jakob Cedergren’s in the original. Gyllenhaal emotes here with a capital E, whereas Cedergren’s performance felt internalized, like a bomb waiting to explode.

The story’s Americanization also entails a taming of its bleakness in favor of a more hopeful conclusion. The original film revealed that Emily, who suffers from schizophrenia, had killed her infant child. Learning about this, Henry grabbed her and planned to deliver her to a mental institution. Fuqua spares audiences the dead baby, who miraculously survives the stabbing here, which suggests there’s hope for the American family yet. And then there’s Joe, who confesses his own crimes to Emily in an attempt to talk her off a ledge. The confession clears his conscience, leaving him ready to atone for his crimes. Whereas the Danish film acknowledged that humanity could reach horrific lows, Fuqua, adopting a decidedly Hollywood perspective, prefers to leave viewers feeling like the world isn’t so bad, after all—as long as we conform to moral ideals.

Among Fuqua’s other changes, the wildfires in the backdrop accentuate the hellish crisis of conscience that plagues Joe throughout the story. There’s also the idea of an American cop who’s willing to admit his guilt in the climactic scene. Police in the US, hardened after the death of George Floyd and many others in similar situations, have refused to acknowledge their culpability for systemic racism and racial violence. When Joe finally confesses what he’s done and takes steps to ensure that he’ll face punishment, it feels like a sharp contrast to the reality of America—and therefore, it presents a moralized lesson that calls on all police to do the right thing. Perhaps Fuqua knew that all he had to do was resituate the story to Los Angeles, a city known for its police brutality against people of color, to create a sharp social commentary about America.

Viewers who felt emotionally eviscerated by the fast-paced original aren’t likely to have the same reaction to the new version. In part, that’s because Fuqua and Pizzolatto don’t stray much from the source aside from a few alterations. If you’ve seen that version, nothing that happens here will surprise you—watching it becomes an exercise in spotting the differences and exploring why Fuqua made the changes he did. But viewers unfamiliar with the Danish film, and I suspect that’s a large number of the people who will watch this on Netflix, may find Fuqua’s minimalism engaging—if for nothing else than Gyllenhaal’s screen presence. And Gyllenhaal does a fine job with the role, guiding the viewer through an entrenched situation with only his voice and intensified reactions. Still, Möller’s version felt like it reached deeper without overemphasis, whereas the Netflix version feels like, well, the Netflix version.