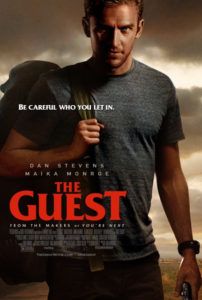 When David arrives at the Peterson household, his presence is a mixed blessing; the family’s eldest son Caleb died in Iraq, and David, who claims to be a fellow soldier, is a painful reminder. Though unknown to the Petersons, he appears in a photograph of Caleb’s squad on the mantle over their fireplace, and he promised Caleb that he’d watch over them. He’s good-looking, polite, clean-cut but also rugged, and his aw-shucks demeanor instantly wins over most of the family. And yet, we cannot help but feel a sense of dread around David, perhaps because when The Guest’s title appears onscreen, it’s announced in a John Carpenter font with a menacing synth tone behind it. The film marks the second genre feature by director Adam Wingard and his writer Simon Barrett after the excellent home-invasion thriller You’re Next, and like their previous collaboration, the filmmakers employ established conventions of the horror and action genres in such a fun, knowing way that the proceedings cannot help but have an infectious quality for those versed.

Before any more plot details are revealed, however, know that going into the film unspoiled is ideal and reading further into this review would make that impossible. Now that you’ve been appropriately warned, The Guest is what happens when First Blood is spliced with the DNA of a slasher yarn, complete with giddily violent exploits and literal haunted house situations. Dan Stevens stars as David, who arrives at the Peterson’s to find a broken home. Deep in mourning over the loss of their son, Mom (Sheila Kelley) can barely function and Dad (Leland Orser) drowns his sorrows in drink. Their youngest, the teenage Luke (Brendan Meyer), mopes about with his hair in his eyes when he isn’t being bullied by jocks. And their daughter, the twentysomething Anna (Maika Monroe), works nights at a local diner and can’t believe her parents would invite a stranger to stay in Caleb’s room. But after cooking with Mom, sharing a beer with Dad, and helping Luke with his homework, David soon wins Anna over simply by appearing shirtless in the hallway.

Wingard’s choice to cast Stevens, the British talent from Downton Abbey, as David was an ingenious stroke; he’s instantly likable, charming, and attractive. The character even becomes heroic by defending Luke’s honor against bullies in a cheer-worthy brawl scene, but afterward, he offers some eyebrow-raising advice to the boy—he tells him to fight back against bullies, and if that doesn’t work, he should burn their houses down. Other warning signs are less obvious, such as David’s removed reactions and delayed responses to basic stimuli, like one of Anna’s friends making a pass at him. Indeed, his behavior is enough to set off an alarm inside of Anna, inciting her to call his military base to confirm his background. When we see Major Carver (Lance Reddick) from Special Forces nervously call for every trained killer within a hundred miles to converge on David’s position, our just-under-the-surface trepidation breaks through into all-out fear.

Ultimately, The Guest is an actioner that bears a horror structure. One by one, the bodies pile up, but the film never loses its black comedy edge. As “David” (or whatever his name is) is gradually revealed to be a maniac of sorts, he somehow remains charming with his courteous smile, which persists even as he’s firing bullets into innocents. Funny thing, Barrett’s script never fully explains what has happened to David and why. We learn vague details about David’s origins, but he remains a surreptitious figure, shrouded in secrecy and incomplete allusions to experiments gone wrong. In that sense, he’s a movie monster not unlike Frankenstein’s creation—a creature set into motion and unhinged by a combination of military experimentation and, perhaps, post-traumatic stress disorder. As a result, there’s a sly subtext about the dangers of damaged soldiers returning home, but not so much that you would call it a theme.

To be sure, Wingard is more interested in purveying an extreme, blissful ride into genre territory. The finale is pure horror. Set in a high-school haunted house maze, the sequence has David tracking down Anna and Luke amid strobe lights, fog machines, fake screams, and rattling doors that cause a jolt. Throughout the film, production designer Thomas S. Hammock and set decorator Susan Magestro adorn their sets with Halloween décor, complete with autumnal colors, jack-o-lanterns, and holiday kitsch to underscore the horror strains. Meanwhile, Steve Moore’s electro-synth score recalls something between Escape from New York and Big Trouble in Little China, moody and very ‘80s in the best way imaginable. The final Gotcha! moment recalls those ‘the monster is still out there’ endings popularized in ‘80s slasher fare like Halloween, Friday the 13th, and A Nightmare on Elm Street. And despite David’s high body count, the audience almost roots for an antagonist who borders on being an anti-hero.

The film’s tech credits are top-notch, with just enough low-budget style so we know it’s an independent release, but it’s also made with just enough precision to make the whole thing admirable. Cinematographer Robby Baumgartner, whose résumé includes gaffer and chief lighting duties on films from Léon: The Professional to There Will Be Blood, makes his first feature-length film here, and he delivers solid action scenes shot with a confident indie visual sense. Wingard serves as editor and cuts the violence together in precise, efficient bursts. But it’s really Stevens who delivers the action with a jovial intensity, like a murderous Jason Bourne. Along with Monroe’s solid performance as the last girl standing, Stevens elevates The Guest into an experience every bit as tricky and intelligent as You’re Next (in fact, an animal mask from Wingard’s previous film makes a brief appearance). The only thing more exciting than watching such a playful genre exercise is wondering what Wingard will do next.