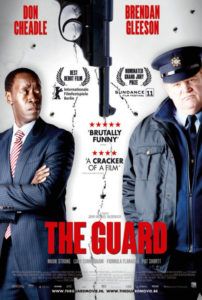 Like his younger brother Martin did with In Bruges, first-time writer-director John Michael McDonagh’s Irish crime comedy The Guard makes excellent use of Brendan Gleeson, an actor not typically a leading man, yet always substantial in his supporting roles. You’ve seen Mr. Gleeson before, no doubt, in everything from Braveheart to 28 Days Later to the Harry Potter series. He’s frequently employed by Neil Jordan and other Irish directors, as he has an unmistakable and quintessentially Irish presence. Stout and solid, he’s an imposing figure who at 34 left a teaching position and became an actor; now he’s among the best character actors working today. Defined by his range and commanding physicality, he can burn with a ferocious edge in one scene or become a teddy bear in the next. Like his brother before him, the elder McDonagh places Gleeson somewhere in-between.

Set in Connemara, represented as the boonies of Ireland, McDonagh’s script places Gleeson into a surly policeman role as Sgt. Boyle, a Garda (Gaelic for “cop”) whose quiet patrol affords him little to do. After an unlikely murder springs up in his town, Boyle and his young partner McBride (Rory Keenan), newly arrived from Dublin and unwanted by Boyle, search for leads. But soon FBI agent Wendell Everett (Don Cheadle) arrives, working with Irish authorities to track a half-billion dollar cocaine shipment reportedly arriving in Boyle’s territory and brokered by three chummy-yet-dangerous drug traffickers (Liam Cunningham, Mark Strong, and David Wilmot). During Agent Everett’s debrief, however, Boyle makes inquiries laced with a malicious string of racial stereotypes. Are Boyle’s comments intentional, to goad the fancy American agent into losing his cool? Or is Boyle just genuinely an uninformed racist with a mean streak?

Boyle, deliberately offensive and vulgar, grows more complex and thus more interesting throughout the course of he and Everett’s relationship, as they’re teamed together to canvas Boyle’s neighborhood. Hilariously, he’s open about his use of drugs and affinity for prostitutes, but his coarse honesty is counterbalanced by his tenderness with his dying, equally foul-mouthed mother (Fionnula Flanagan), and his wise expressions that Everett isn’t quite sure how to interpret: “I can’t tell if you’re really fucking dumb or really fucking smart,” Everett tells him. Meanwhile, Everett remains an underwritten, one-note construction that the audience is meant to identify with, if only because we’re not entirely sure of Boyle’s astuteness ourselves.

Boyle’s impenetrable façade embodies, in its own quirky way, a characteristically tough Irish exterior that Americans, like Everett, have such a hard time cracking or even understanding. In a roundabout manner, that’s what The Guard is all about. Given this, it’s odd that instead of distinctively Irish music, McDonagh chose a Leone-esque score courtesy of the band Calexico, lending the film a Western feel wherein the local sheriff and the plucky outsider take on a group of bandits in a climactic shootout—admittedly, a lackluster action sequence without much by way of thrills. Perhaps McDonagh hopes to associate the classical Western hero with Boyle’s exaggerated Irish persona—internalized and honorable, yet crude, close-minded, and joyously reckless.

Whichever side the viewer attributes to Boyle (“fucking dumb” or “fucking smart”), Gleeson’s performance and the film’s constant string of laughs wash over the ambiguity, which teeters toward the “fucking smart” realm. Gleeson’s performance is cleverly nuanced, punctuated with racial insults and knowing smiles that, on the surface, may be interpreted as Irish stubbornness, but suggest that much more is going on behind Boyle’s boorish exterior. Gleeson has rarely been better. If one major flaw can be attributed to the film, it’s that Cheadle isn’t as interesting, his character grossly overshadowed by Gleeson’s. As a result, the elder McDonagh’s debut feature may not be as assured, well-rounded, or exciting as his younger brother’s (to be fair, few first-time features are as well composed as In Bruges), but their styles have clearly emerged from the same gifted gene pool.