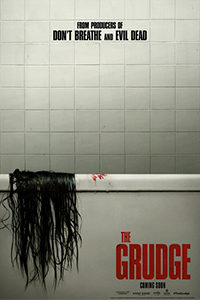 If the new version of The Grudge teaches us anything, let it be this: When a ghost beckons you saying, “I wanna show you something,” don’t follow it. That, along with other lessons, emerge from writer-director Nicolas Pesce’s reboot—possibly sequel—to Takashi Shimizu’s original Ju-On: The Grudge from 2002, a staple of the J-Horror subgenre. The movie further instructs us that, when investigating a creepy sound at night, one should always tiptoe on creaky wooden floorboards and never turn on the lights. Also, it helps if you call out the name of the person you’re looking for, repeatedly, especially if there’s no answer. And if you can get Lin Shaye in there somewhere, that helps too. Most of these teachings come from other, better resources in the supernatural realm, but Pesce can’t help but indulge in revisiting the lesson plan. The final instruction, of course, is that the vindictive ghost haunting your poorly lit house never really goes away; even after you’ve exorcised the thing, it’ll be back.

That’s the enduring message of the never-ending series, which began with Shimizu’s originals and continued with his English language remake in 2004, developed by Sam Raimi’s Ghost House Pictures. Not content to let the intellectual property stagnate, Raimi’s production company revives the material once more, after a total of twelve entries in all—including several Ju-On titles by Shimizu and other Japanese filmmakers, plus several more under The Grudge banner developed in Hollywood. Admittedly, I have only seen three of them, the first two by Shimizu and the first Americanized version; all others have the stink of direct-to-video about them. But one could not be blamed for thinking the latest would improve upon earlier iterations. Pesce’s previous work alone shows evidence of a skilled filmmaker interested in playing with genre in creative ways. His microbudget horror debut The Eyes of My Mother (2016) and his giallo-inspired second effort, Piercing (2018), each show he’s a storyteller interested in the morbid limits of obsession.

With more money and a larger cast to play with, Pesce’s new take on The Grudge looks and feels like the result of a director grasping for control but somehow losing it along the way. It’s a distinct looking film, as cinematographer Zachary Galler shoots as if through an amber-hued lens. The persistent burnt-yellow color of everything onscreen raises questions about the reason behind this visual choice, whereas the two credited editors (Gardner Gould, Ken Blackwell) attempt to rush the proceedings, chopping up Pesce’s otherwise intentional visual rhythms. Perhaps it goes without saying, but this is also an exceedingly dark movie. It’s almost to the point where we suspect the entire roster of characters has acute photo-sensitivity. What other reason could there be for wandering around in the blackest night? Are they trying to be haunted by a Japanese ghost?

For the uninitiated, Pesce’s movie offers titles in the opening that explain the basic premise: When someone experiencing a great rage dies suddenly, they create a curse that can be passed from one victim to the next, appearing in the form of white-faced ghosts that release chittering, burp-like sounds. It’s all rather poorly explained by Pesce’s screenplay, which offers no origin to the movie’s curse (nor an ending, for that matter). When the story opens in Tokyo in 2004, the curse has already been born off-screen, and a reference hints that it originated from one of Shimizu’s movies. It finds its way to Pennsylvania, and from there, the curse spreads among a number of families. The hero is Detective Muldoon (Andrea Riseborough), a single mother trying get over the loss of her husband. She investigates two sets of violent deaths from 2004 and 2005, each of which took place in a single haunted house, and she picks up the contagious curse along the way.

The cast of The Grudge is above average. Pesce has assembled a roster of talented character actors who enrich every scene with their presence, even if they can’t overcome the generic nature of the J-Horror scares—which went out of fashion in the mid-2000s and, in any case, aren’t revitalized here. Muldoon’s new partner, Det. Goodman, is played by Demián Bichir. John Cho and Betty Gilpin play an expectant couple grappling with the possibility that their child has ALD. Frankie Faison plays Lin Shaye’s husband, who contacts a euthanasia counselor, played by Jacki Weaver, to resolve his declining wife. When Muldoon learns that Goodman’s old partner, William Sadler, went mad, she visits him in the mental institution. Headed by the compelling Riseborough, it’s a cast that almost legitimizes the nonsensical developments of the plot. But then, such logical leaps are standard for J-Horror. In most cases, dramatic integrity comes secondary to the melancholy mood, darkness, and jump-scares therein.

As the first major studio movie to debut in 2020, The Grudge joins the ranks of horror movies (including Escape Room, Insidious: The Last Key, and The Forest) dumped into January as counter-programming to the season’s awards contenders. There’s always an audience for this stuff, and the modest $10 million budget will be recovered, maybe even enough to justify a sequel. Alas, it’s a shame that Pesce’s talent as an independent filmmaker has been reduced to such a commercial low point; then again, if it performs well, it’s bound to give him the clout to take risks on a more substantial project. Until then, The Grudge is another in a long line of Hollywood’s ill-advised attempts to adapt a culturally-specific strain of horror for Western audiences. The result never quite renders, resulting only in a goopy, gurgling mess of CGI ghosts, predictable fake-outs, and manipulative scares.