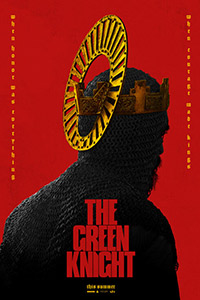 David Lowery’s The Green Knight might have been a welcome deconstruction of the monomyth, except his verbose stylization of every single moment stalls any hope of making a human connection. Self-consciously arty, Lowery’s adaptation of Sir Gawain and the Green Knight comments on the history of artistic reinterpretation but feels lost in the director’s overwrought visual agenda. Over the centuries, the anonymously written fourteenth-century poem has been adapted from Middle English by scholars and even Lord of the Rings scribe J.R.R. Tolkien. Each time, the text’s translation to literature, the stage, or cinema proves a little different, sometimes in fascinating ways. Lowery’s mannerist aesthetic emphasizes wide-angle lenses, CGI-inflected imagery, elaborate production design, and virtuosic camera movements that call attention to themselves. But rather than form-follows-function, The Green Knight’s artifice overextends itself, leaving its potentially rich themes to feel underdeveloped.

Dev Patel plays Gawain, the cocky but inexperienced nephew of King Arthur (Sean Harris). At the Round Table’s Christmas feast, a towering, ent-like Green Knight (Ralph Ineson) enters the hall and proposes a game: Anyone willing to deliver a single blow with their sword can take his axe, and in a year, they can seek him out at the Green Chapel, where he will deliver the same wound in return. Gawain volunteers and, rather than inflict a minor wound, he beheads the mysterious knight to achieve swift glory—only to see the creature stand, pick up his detached head, and ride off cackling. But after a year passes, and he achieves some superficial celebrity from the incident, Gawain hesitates to take the promised six-day journey to the Green Chapel. Then, compelled by Arthur and his witchy mother (Sarita Choudhury)—she seems to have orchestrated the entire situation as a test of his judgment and character—Gawain finally sets out alone to meet his fate and learn for himself what it means to be a knight.

Although the story follows a standard hero’s journey trajectory, the film barely registers genuine emotion except for some mild romance in a couple of grounded scenes between Gawain and his lover (Alicia Vikander) back home. He remains cruelly non-committal to her before setting out, and Lowery returns to her face in flashbacks during Gawain’s adventure as a shorthand for how our hero’s behavior sometimes isn’t pure of heart. Along the way, he runs into a band of giants, a beheaded specter in need of reassembly, and a fox that tags along. Seeking destiny and direction, Gawain’s vision quest is aided by psychedelic mushrooms, leading to some predictable hallucinatory imagery. The film comes to an impasse at a castle occupied by a nobleman and his wife (Joel Edgerton and Vikander again), who offer Gawain food, rest, and sexual temptation. Each episode tests Gawain to make the right choice and forces him to question why he feels compelled to continue. 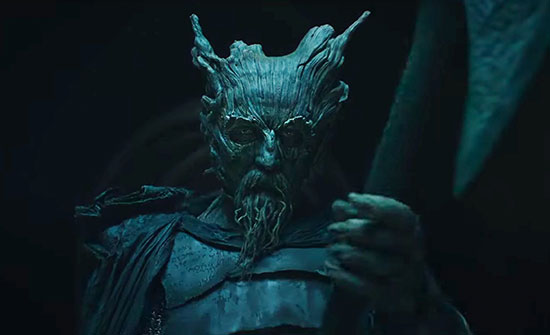 Somewhere in here is a convincing character study, except Lowery’s need to inject epicness and ostentatious visualizations into every scene distracts from its potential depth. The Green Knight aims for something transcendent, even Kubrickian, but it ends up feeling like a labored knock-off. Take a sequence involving three thieves on the road, clearly inspired by a similar one in Stanley Kubrick’s Barry Lyndon (1975). Lowery’s lingering camera, complete with beautifully rendered images by cinematographer Andrew Droz Palermo, tends to move slowly but without the gravity of Kubrick’s film. There’s nothing to think about in the silence, brooding, and deliberate pace. Instead, Lowery tries to fill that absence with gorgeous costumes, mythic scenery, choral music inflected with the occasional electric guitar, and camerawork that desperately wants to be noticed (when in doubt, try an upside-down shot).

Beyond Lowery’s affected style, The Green Knight makes a point about the danger of obeying conventions and the necessity for revisions. The film opens with an image of Gawain seated on a throne. A halo crown descends from above and, upon resting on his head, the crown and the man burst into flames. In no uncertain terms, the image reflects Lowery’s treatment of classical Joseph Campbell-brand heroes. Beneath such sights, Lowery comments on how one defines themselves by their adventures; however, he also warns that conforming to traditional notions of destiny and heroism leads to humanity repeating its mistakes. Twice in the film, Gawain faces certain death, and both times, he sees his potential future unfold before him. Afterward, he can either resign himself to his prescribed fate or make an active choice to alter his behavior and become something better. Lowery’s self-aware revisionism is further signaled by a title effect that scrolls through various fonts, reminding us that Sir Gawain has been told countless times before in various formats, and it will likely be told again. Vikander’s noblewoman also admits to keeping a vast library, and in a nod to revisionism over time, she confesses to making the occasional improvement while copying texts. It’s a fine theme, to be sure. But it’s contained within a film that meanders and offers little opportunity for the audience to bond with Gawain, regardless of Patel’s generally commanding screen presence.

Themes aside, this is a director who tends to lose himself in aesthetic concepts. His breakout film Ain’t Them Bodies Saints (2013) felt like an active stylistic exercise to replicate Terrence Malick’s Badlands (1974). Something similar happens in his lauded A Ghost Story (2017), an over-hyped attempt to create a mournful and transcendent mood, albeit captured with the winking conceit of a bed-sheet ghost. His best films tend to be those that restrain his aesthetic ambitions and demand equal attention to characters and emotions, such as the ‘70s throwback The Old Man & the Gun (2018) or the tear-jerking Disney remake Pete’s Dragon (2016). However, when he follows his instincts, the result tends to be drained of emotions and overly reliant on a conceptual platform. His films feel like they’re reaching for profundity in either case, but his bold grasps for meaning are less admirable than if he demonstrated some restraint.

The Green Knight plays like conceptual art stretched over a narrative façade. Its themes feel grossly underserviced by a production too concerned with appearances, which is a shame given the potential of both the sights and ideas behind them. Only in the dialogue-less final minutes does the message feel urgent and efficiently presented. Lowery asks questions about the importance we assign to our classics, given how they’re usually the product of the white Christian patriarchy. Patel’s casting as an Indian hero with a pagan background in a traditionally Anglo-centric role nods to this. However, such vital revisionism comes after two hours of the mind wandering, awestruck by the film’s beauty but not immersed in its narrative thrust. Though it’s bound to be praised for how Lowery rethinks the legendary fantasy and situates the tale in today’s political climate, it isn’t easy to imagine viewers feeling much during the experience besides cold admiration.