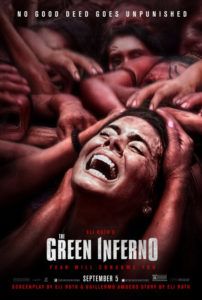 In his ongoing quest to scare young, college-bound Americans into staying where they belong, in their safe and privileged bubbles, director Eli Roth once again sends a bunch of curious twentysomethings to their gruesome demise in The Green Inferno. A throwback to Italian cult cannibalism classics from the 1970s and 1980s, the film features an undiscovered tribe of Amazonians feasting on a field trip of pretentious activist students. Roth seems preoccupied with the notion of sending annoying bros and babes to their death, as he did with his grisly debut Cabin Fever (2002), about a flesh-eating virus that brings collegians to various nasty ends. He also delivered torturous deaths for two sets of students on vacation in Eastern Europe in Hostel (2005) and Hostel: Part II (2007), the youngsters having been abducted and ripped apart by psychos who paid for the pleasure of doing so.

For The Green Inferno, Roth once again teams with Guillermo Amoedo, with whom he co-wrote Aftershocks, a horror-thriller of similar ilk directed by Amoedo about partying twentysomething tourists caught in the aftermath of a Chilean earthquake. The Green Inferno’s story is an homage written in blood and gag-inducing gore, inspired by Ruggero Deodato’s shocker Cannibal Holocaust (1980), which is where Roth took his film’s name—from Deodato’s snuff-doc-within-a-film. Borrowing from any number of cannibal-themed titles in which Italian directors show us the result of Westerners meddling with jungle tribes, Roth follows canon (names like Deodato, Umberto Lenzi, and Joe D’Amato) and depicts indigenous peoples as savages with a taste for human flesh.

Inspired by the passionate activism of Alejandro (Ariel Levy), Justine (Roth’s wife, Lorenza Izzo), daughter of a United Nations lawyer (Richard Burgi), teams with Alejandro’s group of college students to stop bulldozers from rolling over an ancient tribe in the Peruvian jungle. Their eventual protest in the Amazon ends up being a success, although not what Justine signed up for, and on the way home their plane crashes a few miles away from where they were protesting. Those unlucky enough to survive the crash are darted, carried away, and caged for later consumption by the very tribe they were trying to protect (“Isn’t it ironic, dontcha think?”). Besides the threat of becoming a meal, Justine has been identified as a virgin by the tribe’s high priestess (Antonieta Pari). We know what’s coming because Justine took a women’s studies course, and we heard a lecturer talk about the horrors of female circumcision in various countries around the globe (and because genital mutilation is a common strain in the cannibal subgenre).

The Green Inferno has had a rough road to theaters. After making the festival rounds in 2013, the film was set for release in 2014. But distributor Open Road Films pulled the title from their schedule just prior to its release. Although some suggested it was all a publicity stunt to gather attention among horror aficionados for the film’s excessive gore and violence, the actual delay was a result of a dispute between the film’s distributor and its financier, Worldview Entertainment. Once the dispute was resolved, The Green Inferno hit theaters without so much of an upturned nose, despite other critics complaining that perhaps its R-rating was not restrictive enough.

Roth doesn’t go the extra yard to push the envelope in his film, at least not as far as his Italian counterparts. Fortunately, he spares the audience the subgenre’s frequent animal mutilations, rape scenes, and altogether avoids any rapey vibes—for this we must be thankful. However, he relies on some realistic looking gore to occasionally makes the audience gasp or question if their lunch will stay down, while elsewhere he uses CGI jungle animals (ants, a black leopard, etc.). There’s also an absurd sequence of Cheech & Chong humor, where the entire tribe of cannibals eats a victim stacked with cannabis—the result allows for a zombie movie homage where a young man is eaten alive by a horde of stoned cannibals with a case of the munchies (a little girl squeezes out from the horde with her prize: the victim’s calf and foot, still in its boot). The humor even extends into a juvenile moment where one of the captives suffers from diarrhea; even the tribe’s children waft the smell away from their noses and giggle.

Worst of all, Roth slathers on his commentary in thick, unsubtle applications. If The Green Inferno has a social purpose, it’s to deride naïve college students who adopt a cause because it’s the fashionable thing to do, yet they know really nothing about it. Roth’s attitude seems to sympathize with Justine’s everything-is-stupid roommate who says, “Activism is so fucking gay.” That’s about the high-point of intellectual debate you’ll receive from Roth, whose camera watches as campus lawns are covered with students protesting this or that cause based on what they read about in their political science class. Not that the trend isn’t somewhat contemptible, but Roth should focus his energies on another target and move on from his obvious preoccupation with students being tortured for how annoying and privileged they can sometimes be. Alas, The Green Inferno provides some momentary shocks, but it’s as heavy-handed as anything on Roth’s résumé.