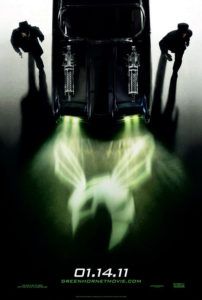 For the second time, chummy actor Seth Rogen has teamed with his friend and co-writer Evan Goldberg to elevate their broad but enjoyable screenplay with an artistically relevant director. The first instance was in 2008 with The Pineapple Express, where they converted indie filmmaker David Gordon Green’s subtle dramatic poetry to a hilarious stoner action-comedy style; the result was nothing short of unexpected joy, a blend of hilarious performances and exciting shootouts. Now, with The Green Hornet, a modernization of the serialized 1930s radio program and 1960s television show, Rogen and Goldberg have gathered the frenetic talent of director Michel Gondry, whose Eternal Sunshine of the Spotless Mind and Human Nature hardly speak to the blockbuster crowds traditionally needed for such a release.

However, just as Gordon Green demonstrated that his talent extends beyond his proven comfort zone, Gondry “goes mainstream” here and delivers a film containing energy enough for two: one an excellent superhero yarn and the other a buddy comedy. Since those characteristics are combined, the resulting experience is doubly enjoyable, crackling with Rogen and Goldberg’s riotous slacker dialogue and ornamented by Gondry’s wild visual style. In tone, the experience compares to a funnier version of Kick-Ass, complete with its homemade superhero setup and real-world results. The Green Hornet has more fun with the concept, though, thanks to Rogen’s just-one-of-the-guys persona.

Rogen plays Britt Reid, the underachieving playboy son of idealist newspaperman James Reid (Tom Wilkinson). When dear ol’ dad dies from a freak bee sting, Britt inherits his father’s media empire, as well as dad’s personal assistant, Kato (Taiwanese pop-star Jay Chou). Aside from his talents as a barista, turns out Kato has a knack for martial arts and weapons design. When Britt learns of this, he follows a lifelong desire suppressed by his father to defend the innocent, and he convinces Kato to become homespun superheroes who pose as hoodlums to stop the rampant crime in Los Angeles. Kato whips together a souped-up car called Black Beauty and a plethora of neat gadgets, but Britt realizes his partner has more to offer as a human weapon capable of seeing the enemy’s plan of attack before they do. When jumped by a group of thugs, Britt watches in awe as time seems to slow for his sidekick, who takes down bad guys like he’s the lovechild of Bruce Lee and Neo.

Meanwhile, Britt plays media mogul much to the chagrin of the paper’s longtime editor (Edward James Almos), which doesn’t help impress his new secretary (Cameron Diaz), whose expertise in criminology gives the makeshift heroes ideas on where to strike next. In due course, Britt’s fervent insistence that the paper run stories on the emergence of “The Green Hornet” gathers the attention of Chudnofski (Chistoph Waltz), LA’s resident criminal kingpin whose ego feels threatened by any competition. Waltz proves enormously menacing (though not as much as “The Jew Hunter” in Tarantino’s Inglourious Basterds) in his first scene involving a small-time hoodlum (played by James Franco in a riotous cameo) who makes a grave mistake by insulting Chudnofski’s supremacy.

The plot climaxes in typical superhero movie format with a big showdown between hero(es) and villain(s), but it’s Gondry’s exuberance behind the camera and the writing that make this an exceptional entertainment. The screen pops with visual flourishes from split screen effects to an expert use of slow-motion; Gondry even has a chance for surreal imagery in a ‘total recall’ sequence that blends sharp editing with montage and makes ample use of the post-converted 3D device. The director has turned down the dial on his organized chaos approach so effectively employed on Be Kind Rewind (and not-so-effective in The Science of Sleep), although by the time our heroes are driving Black Beauty through cubicles in a business office, you have to wonder if Rogen and Goldberg didn’t rewrite portions of the script with Gondry’s approach in mind.

Rogen and Goldberg assign each character an arc, giving them defined personalities instead of clichéd superhero movie character types. Kato could have been the silent, ass-kicking straight-man next to Rogen’s slacker Britt; but the writers allocate Chou a rich characterization that has as many gags as the leading man, and he brings just the right level of charisma to the role (which the previously cast Stephen Chow may not have achieved). Chou gives the standout performance overall, and here’s hoping this isn’t his last appearance in a Hollywood production. As for Rogen, he lost a dramatic amount of weight for his part, although don’t expect any shirtless masquerading—in addition to his usual ‘dude appeal’, the actor still has a frame your average fanboy can relate to, just slimmer. And then Waltz walks away with every scene in which he appears, bringing a great deal of absurdity and danger to his megalomaniacal crime boss in moments of image and fashion self-consciousness.

Going back as far as the mid-1990s and beyond, Hollywood has tried to gather materials for a live-action film based on “The Green Hornet”. Even if the final result proves less traditional than other failed productions may have been, Gondry’s film is a postmodern blast—amibitious in its effortlessness and excitement and humor all the way through—and well worth the wait for fans of the source material. It may only be two weeks into 2011, but this critic can say with much confidence that in a year crowded with superhero films, The Green Hornet will be one of the year’s best and most successful among mainstream audiences, especially given its debut in the lull of January.