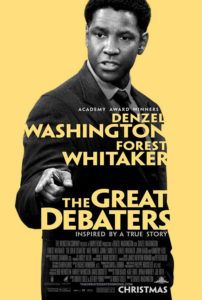 The Great Debaters is a feel-good drama about the lives of an all-Black debate team in the Jim Crow South. Oprah Winfrey’s company Harpo Films produced the picture, giving directing privileges to second-time director Denzel Washington, who also stars. It follows a traditional sports movie narrative, showing us the team’s competitive and inner struggles, offering some profound experience with which these debaters use to reinforce their arguments. But this is not a movie about their love of debate; rather, it’s an argument for equal opportunity education—and who can debate against that?

The movie begins in Marshall, Texas, circa 1935. Washington, who’s having a great year after his bravado work in American Gangster, plays Wiley College professor Melvin Tolson. He follows the Hollywood Manual to Portraying Great Teachers Guidebook and steps up on tables, lectures with a boom, and challenges his students to think—all wonderful characteristics for a teacher, and handled magnificently with Washington’s affinity for speaking confident, knowing dialogue. Tolson would later become a renowned writer and release several poetry collections and epic poems, but first, he was a rabble-rouser of sorts, bringing together Black and white farmers to form a sharecropper’s union under the nose of his opposition, Sheriff Dozier (John Heard). Those are his nighttime activities, whereas during the day, at Wiley, he holds try-outs for the debate team. He remains secretive, honorable, and well-intentioned, especially when his politics come into question, yet he insists on leaving them outside the classroom.

His team is assembled with four members, two lead debaters, and two alternates: Hamilton Burgess (Jermaine Williams), the returning champion; Henry Lowe (Nate Parker), whose nightlife consists of women and drink and loud music; Samantha Booke (Jurnee Smollett), an alternate who should be a lead; and James Farmer Jr. (Denzel Whitaker, who is of no relation, nor is he named after either of his costars) is the team’s quiet researcher. James Jr. remains the film’s centerpiece, hoping to impress his professor-preacher father (Forest Whitaker) while finally gaining enough confidence in himself to debate heartily. Of course, living in Texas in the ‘30s doesn’t make it easy. He sees horrible signs of racism everywhere, reflected in his team’s arguments and personal troubles. Despite his family’s renowned intellectual accomplishments, their ancestors were likely slaves, and the South remains unwilling to think otherwise.

In one scene, while Tolson drives his crew across the country from competition to competition, they come upon a late-night lynching mob. Earlier in the film, Tolson educates on the history of the verb “lynch,” as it derives from the hideous acts of American Revolutionary Charles Lynch. We see how the South has kept up with Lynch’s practices when the mob hangs and burns to death a young Black man. Seared into the brains of the debate team, such imagery nearly breaks the team apart. But instead, it helps them win a national championship.

And what about those debates? Why do Washington and screenwriter Robert Eisele have their debate team argue only the positive side of every argument? If you’re familiar with debate teams, you know that sometimes beliefs and the assigned stance do not coincide, challenging the team’s ability to argue rather than testing their convictions. It’s just dumb luck, I suppose, that Tolson’s team always debates issues in favor of racial equality. (Then again, it would be awkward if they had to argue against it.) Even though the title is The Great Debaters, this isn’t a movie about the sport of debate.

We remain hinged to formulaic movie ideals of inspirational storytelling, but we’re also immersed in some nightmarish truths in American history, namely how intolerance and cowardice are bred by ignorance. Of course, this isn’t a film where the team can out-debate Southern racism, convince the small-minded Sheriff of the error of his ways, or single-handedly spread a desire for knowledge throughout the South. The movie’s embrace of clichés is minor compared to its moving argument and the well-represented period in which the film discusses it. Washington hasn’t made a flawless movie. It has logic problems, and historical contradictions amassing throughout that might irritate some viewers. Despite heavy motifs, I would call The Great Debaters light entertainment, in its most substantial-yet-accessible form.