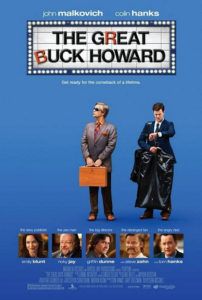 The Great Buck Howard celebrates variety acts from yesteryear—those familiar faces that no longer appear on the late night talk show circuit either because they’re too old, or because Jay Leno didn’t show interest after Johnny Carson retired. Buck Howard is such an act. He’s billed as a “mentalist” who specializes in guessing your number, asks “Isn’t that wild?!” after every feat, and then sings his corny rendition of Burt Bacharach’s “What the World Needs Now”.

John Malkovich plays Buck Howard, creating a fictional character so real you’ll look him up on Wikipedia just to verify he’s not. Boasting that he was on Carson some 61 times, Buck wears bad suits, practices impressive bits of magic, and shakes hands like he’s trying to dislocate your shoulder. He’s private, keeping his life centered on his ever-going road tour of rundown stages across small town America. Those close to him suspect he’s gay, but no one knows for sure. Malkovich lends the role his weird intensity, in a performance that compares to his humorous, eccentric turns in Being John Malkovich and Color Me Kubrick.

The movie contains more by way of celebrities, both notable and obscure, than comedic value. There’s much deprecating talk about Leno, who Buck despises. Tom Arnold appears as he often does, but only because he embodies the idea of a random unimportant star. Much fuss is also made about George Takei of Star Trek fame, mostly in reference to whether or not Buck is gay. Griffin Dunne, Ricky Jay, Conan O’Brien, John Stewart, Martha Stewart, and Steve Zahn all appear in some capacity as well. The stand out appearance comes from Tom Hanks, who co-produced the picture, no doubt hoping to propel the slowly burgeoning career of his son.

Colin Hanks stars as Troy Gabel, Buck’s new road manager. The film’s core is Troy’s search to find himself after quitting law school to become a writer; we learn this in overly clarifying narration recalling the young Hanks’ part in Orange County. We also learn that Troy admires Buck, despite being belittled by the pseudo-star’s outrageous Prima Donna demands, delusions of grandeur, and holding onto the Carson years with undying devotion. And yet, he maintains resolve like no other, and an admirable passion for his work, which very well could be authentic magic.

Following Buck through a rough dry spell into brief resurgence are Troy and marketing agent Valerie Brennan (Emily Blunt), who engage in a minor affair of convenience while on the road. Valerie believes Buck pathetic for his determination to keep going, his lack of popularity having no effect on his confidence. Troy thinks there’s something wonderful about a performer so proud of what he does that he doesn’t care if he’s “in”. These subplots don’t really form a salient arc beyond exploring Troy’s confusion with his life, but sometimes filler is amusing enough.

Based on The Amazing Kreskin, the real life mentalist who appeared on television, either on his own program or Late Night with David Letterman, Buck Howard is the creation of independent writer-director Sean McGinly. Among Kreskin’s tricks, he became famous for having his audience hide his fee during a performance after he was escorted offstage; when he returned, he always found his paycheck (well, almost always). This, too, is Buck’s signature trick, and though like Kreskin he’s accused of earpieces or wires telling him where his money is located, both men prove otherwise. The scene where Buck sells out for a Las Vegas performance, and then can’t find his money, is one of the most affecting offered by McGinly.

The film’s light comedy is very light, inspiring chuckles right through without ever making us weep for the characters or bust a gut from laughter. An ode to those forgotten figures from late night television, the comedy suggests such entertainers as Buck Howard never lose their appeal or talent. That they fade away is a symptom of changing times and television’s desire to remain hip. Should one of those figures find their way to a local venue, you might think twice about dismissing them after this movie.