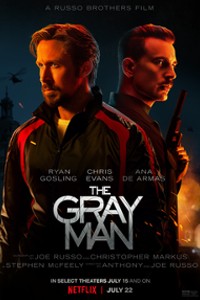 A good action movie is difficult to find. Although dozens are released every year, few have more to offer than some impressive stunts, fast-paced fight choreography, or eye-popping sequences of destruction. They supply the requisite thrills, but once the credits roll, they often fade from memory. The problem isn’t the action; it’s the banal characters. Rarely do action movies give us compelling heroes or villains who make a lasting impression. The Fast and Furious series may provide one over-the-top vehicular extravaganza after another, but its dopey family and one-note baddies couldn’t be less engaging. Sure, the John Wick movies started with a compelling revenge story, but the character’s unwavering composure doesn’t have many dimensions. Invulnerable heroes from the killing machine John Rambo to the infallible Dominic Toretto obliterate their opponents and come away barely dented. By contrast, consider characters such as John McClane in the original Die Hard (1988) or Furiosa in Mad Max: Fury Road (2015) that elevate all the trappings of an entertaining actioner, lending humanity and vulnerability to their heroes. Enduring action movies give their characters a sense of humor or depth of feeling beyond point and shoot.

To that end, directors Anthony and Joe Russo make terrific use of Ryan Gosling in The Gray Man, a breezy shoot-em-up that compensates for its unoriginality with charisma and character. The surface looks like a meeting between James Bond and Jason Bourne, except the A-list cast injects more personality into their roles. Gosling brings his signature deadpan to Court Gentry, a con enlisted into a CIA black ops program by Fitzroy (Billy Bob Thornton), who conceived the idea of turning prisoners into mercenaries—think the Suicide Squad but without superpowers. After serving 18 years, the now-codenamed Sierra Six wonders if there’s an exit strategy. Can he retire? Does he have a 401K? The seemingly cold superspy, who is covered in massive scars and has taught himself to accept pain through low, almost meditative grunts, wants a quiet life someday. What’s appealing about this is how Six isn’t out to stop an archvillain from robbing the crown jewels or acquiring a deadly bomb. Rather, he simply wants to survive long enough to withdraw from being the CIA’s unofficial soldier.

At first, Gosling plays Six like his cool-as-a-cucumber stunt driver from 2011’s Drive, whose violence proves just as swift and stoically decisive as his decision-making. In the opening scenes in Bangkok, set against a stunning array of fireworks, Six teams with an operative named Dani (Ana de Armas, getting more screen time than in last year’s No Time to Die) to take down a supposed bad guy. The orders come from Langley, where Carmichael (Regé-Jean Page) has since taken over for the retired Fitzroy. But when Carmichael tries to force a long-range assassination that places a child in danger, Six disobeys orders and approaches the target directly. In doing so, he acquires hidden intel that exposes Carmichael’s duplicity. Six learns that most of Fitzroy’s operatives have been liquidated, and he’s next. Carmichael acts quickly to cover his tracks, calling upon the sociopathic free agent Lloyd Hansen (Chris Evans), who comes armed with a “trash ‘stache” and traits that include “bad ethics, zero impulse control.” Lloyd has no moral compass or concern for collateral damage, and to find and eliminate Six, he blackmails Fitzroy and calls on a small army of wet work teams to hunt Six down. 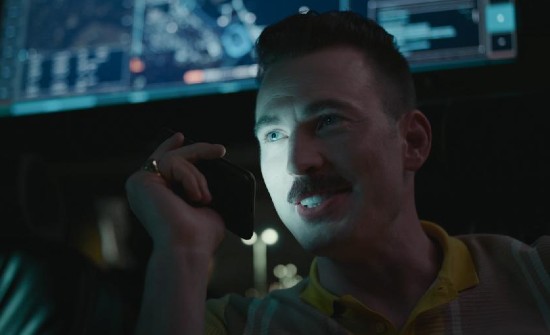 The events recall many Mission: Impossible scenarios, where Tom Cruise’s superagent inevitably finds himself on the run from his agency, and similarly, what unfolds is a rousing spectacle of faces, places, and chases. Fortunately, Gosling’s icy exterior melts somewhat when the film introduces Fitzroy’s niece, Claire (Julia Butters, from Once Upon a Time in Hollywood), whom Lloyd kidnaps for leverage. Bad move, since Six and Claire have a close bond, revealed in an affecting flashback. As the situation becomes ever more desperate, Six’s dry humor, often delivered in one-word comebacks, proves comically disarming—and that’s the point, using humor tactically to distance himself from the moment and strategize the optimal approach. By contrast, Lloyd is a gleefully monstrous agent incapable of restraint and willing to burn through every resource to achieve his target, employing an altogether different comic energy. He’s American exceptionalism at its worst, and Evans is clearly having fun playing the ideological opposite of Captain America. All the while, Six’s escape from Lloyd takes us to Monaco, Turkey, Berlin, Prague, and Croatia, allowing for stunning set pieces. The action takes place in planes, trains, and automobiles, while our outgunned hero battles scores of hired goons. And each sequence is bolder and more exciting than the last.

Based on the first novel in author Mark Greaney’s series, the film was adapted by Joe Russo and the screenwriting duo of Christopher Markus and Stephen McFeely—the creative team behind Avengers: Infinity War (2018) and Avengers: Endgame (2019), among other Marvel features. It’s not that the Russos reinvent the action movie with The Gray Man; rather, they have a strong understanding of character motivations, cohesive action, and straightforward storytelling. Although the “spy vs. spy” trappings prove common enough, the filmmakers deliver a fine-tuned version of the tropes and situations we’ve seen in countless movies before, but rarely with such composure. Doubtlessly, some critics will use words like “generic” and “familiar” to describe the result. Compare the material to the many action franchises of today, and the similarities begin to compile. But where some action movies boast gripping visuals but lack a compelling script or characters, and others feature sharp writing yet don’t have a handle on the spectacle, the Russos’ time in the MCU has prepared them to consider action, story, and character with equal attention.

While watching The Gray Man, I kept thinking about the film in relation to Ambulance, Michael Bay’s recent chunk of overlong chaos. Bay’s over-edited and wildly photographed heist movie features car chases and shootouts, often employing random, fast-paced drone shots injected into the mix. It feels like a filmmaker throwing everything at the viewer without consideration of shot-for-shot logic, scene geography, or visual progressions. Some action junkies love that erratic energy, but it doesn’t work for me. The Russos use the same toolkit but to establish a clarity of space, so drone images do more than supply a cool-looking shot; they create a spatial layout of the scene in an electrifying way. In addition, their drone images often blend with stationary camera angles using inspired CGI, making for a nifty visual trick. To be sure, the Russos know how to stage massive scenes, but they also make brutal close combat scenes look tactile—I’m thinking of the three-hero showdown in their Captain America: Civil War (2016). Similar sequences in The Gray Man involve some combination of Gosling, de Armas, and Tamil superstar Dhanush, playing a mysterious lone wolf assassin. They’re thrilling stuff.

The Gray Man cannot be called original; it doesn’t break the mold established by other action movies and spy thrillers. But it supplies an exceptionally well-made variation that outperforms many like it with an attractive cast, biting humor, and several riveting action sequences. Considering recent examples, it’s only outdone by the Mission: Impossible franchise. You see every penny of the $200 million budget supplied by Netflix on the screen, and given the source material, the Russos’ production will be the first of many if successful, and let’s hope that’s the case. Although the film plays terrifically on the big screen, the theatrical release will be limited to the usual Netflix distribution model. If audiences catch it at home, I suspect The Gray Man will prove just as entertaining (after all, many of us see the best movies for the first time at home). Best of all, its pleasures aren’t just explosions, gunfire, and mayhem. Gosling, de Armas, Dhanush, Butters, and Evans all manage to bring personality to what in other performers’ hands might have been dull tropes. They give the film humanity, humor, and necessary character without which action movies are held back from greatness.