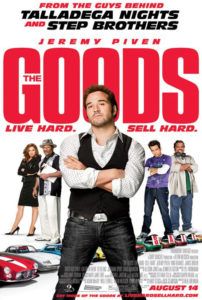 Jeremy Piven plays a version of himself, or at least a version of his Entourage character Ari Gold, in The Goods: Live Hard. Sell Hard., a spoof about gung-ho salesmen. Piven won multiple Emmys and a Golden Globe for spouting out tirades of biting dialogue to convince unlikely buyers to sign on the dotted line. But its not movie scripts he’s selling here; he’s pushing “metal” on a crummy used car lot, using every offensive line and corny gimmick in the book to close the deal. And that about sums up the movie’s appeal. Either you like Piven in this sort of role, or you don’t, in which case you won’t waste your time on this trash anyway. Let’s say you enjoy Piven’s work. What does this comedy have to offer you, the Piven-friendly viewer? Well, Adam McKay and Will Ferrell, the producers of Step Brothers, backed the project, and the same type of unrelenting string of politically incorrect, nonsensical, scattershot bathroom humor prevails. Is that funny to you? Maybe it is. There’s nothing wrong with bawdy material, unless that and Jeremy Piven are your only two legs.

As the hotshot leader of his guns-for-hire traveling sales team, Piven plays Don Ready, a mouthy bulldog born to talk his way into a sale. Aside from loving Bob Seger, he sports perpetual two-day stubble, thick sideburns, short sleeves, and a tie. Backing him is a crew of no-holds-barred salespeople: Jibby (Ving Rhames) just wants someone to love; Brent (David Koechner) has severe homophobia; and big surprise, the woman Babs (Kathryn Hahn) uses her unstable sexuality in her sales spiel. They’re all hired by failing lot owner Ben Selleck (James Brolin) to revive his own sales staff and save the family business over the 4th of July weekend.

The entire plot amounts to one inappropriate gag after another. When sales are down, antics ensue, including a riot, a competition with a middle-aged boy-band, and TV commercials claiming Selleck has testicular cancer, so consumers should buy a car now before it’s too late. Meanwhile, Don actually begins to feel something for Selleck’s daughter Ivy (Jordana Spiro), but she’s already engaged to a putz named Paxton (Ed Helms). The only laugh-out-loud funny moments involve a subplot with Selleck’s 10-year-old son Peter, who has an issue with his pituitary gland; as a result, he looks about 35 and is played by comedian Rob Riggle. Babs has the hots for Peter, despite knowing about his condition, and does everything she can to coax the confused, utterly innocent man-boy into bed. How wrong, but how funny. If only the rest of the movie was as amusing.

A.B.C. Always Be Closing. Those words, so faithful to true salesman vocabulary, were made sad and desperate when David Mamet wrote Glengarry Glen Ross in 1984. Here such truisms are uttered and forgotten in favor of stripper jokes, cheap motels, and an overuse of the F-word—a lot of salesman clichés. Swearing and raunchy humor are all well and good when there’s a story behind them. But the filmmakers behind this movie have done something intriguing; they’ve made a comedy with no redeemable characters and no engaging plot to speak of.

The unfunny attempts to be wacky and distasteful are just so ineffective, so agonizingly flat that the whole runtime becomes a waiting game for the end credits. What’s more, because there’s no relief from the bombardment of stupidity, its 89-minute runtime feels like a never-ending blur of bad humor. Compare it to the experience of car shopping. You approach the lot and see all those salesmen in their cheap suits and windbreakers hovering about like chatty vultures. Once you’re there, you’re stuck humoring them until either you buy a car, leave the lot, or die from overexposure to BS. The only difference here is that Jeremy Piven is the salesperson, and Will Ferrell has a cameo. Does that sound like a good time?