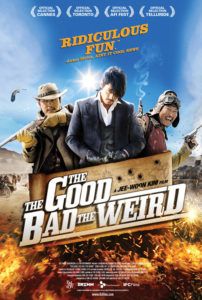 Spawned from a combination of Sergio Leone Spaghetti Westerns and Quentin Tarantino post-modernism, director Kim Ji-woon’s wily, actionized epic The Good, the Bad, the Weird finds a glorious balance between homage and invention. Much like both Leone and Tarantino have done with their films, Kim borrows from now-classic pictures and yet manages to avoid feeling derivative, even if the basic outline of his film follows that of Leone’s benchmark The Good, the Bad, and the Ugly. All similarities to other work leave the viewer’s mind within moments of the first scenes, forgotten in place of Kim’s breakneck pacing and nonstop sense of comic adventure.

At the time of its release in South Korea in 2008, the film’s reported budget of $17 million was then the most expensive in the country’s history. After earning a profit and much praise at the Cannes Film Festival, the film slowly made its way around the globe on the festival circuit. Upon viewing, it’s evident why it’s popularity has spread, as there’s an amazing balance between action, drama, comedy, and thrills, all made with skilled enthusiasm driving every aspect of the production. The bubblegum score recalls something between Ennio Morricone and the Kill Bill soundtrack, the everything-but-the-kitchen-sink action scenes are expertly shot, and there’s fluid artistry to Lee Mo-gae’s award-winning cinematography that enlivens the whole.

Set on the expansive plains of Manchuria in the 1930s, the film’s landscape is a dynamic one. Much like Leone used The Civil War as the backdrop for the third entry in his ‘Man with No Name’ trilogy, Kim (A Tale of Two Sisters, 2004) and his co-writer Kim Min-suk chose a time rife with political conflicts abound in the Far East. It’s an era when the Japanese army inched into the territory, putting pressure on the local Chinese, Korean immigrants, and Russian nomadic peoples. The film’s MacGuffin, a map that leads to a Manchurian treasure from the Qin Dynasty, could prove the pecuniary rescue for any of the parties involved. But at the center of the story, it all comes down to three men, played by three of South Korea’s top superstars, vying for the map for selfish reasons.

On a train rushing through the Manchurian desert, Tae-goo, the Weird (Song Kang-Ho from The Host), a seemingly absurd, clumsy thief, stumbles onto the map during his train heist and makes for the hills. Also on the train is Chang-yi, the Bad (Lee Byung-hun), a sadistic hired gun bent on finding the map and double-crossing anyone who hires him to do so. While they take over the train, the Bad and his gang of killers bump into Do-won, the Good (Jung Woo-sung), a bounty hunter after both the Bad and the Weird. As all three fight each other for the map, throughout the film their struggle sends them closer to the buried treasure the map indicates, giving the story an excuse to jump from one glorious set piece to another.

Kim moves from a rousing train robbery to a bloody encounter with a gangster desperate to get his hands on the map. From there it’s to a shootout at the Ghost Market where thieves go to sell their loot, then onto a comical interlude where the Weird saves some children from a predatory opium den. The most impressive sequence involves several parties—the Japanese army, Russian nomads, and our three central characters—chasing each other down by horse and jeep, winking to scenes in both Stagecoach and its disciple Raiders of the Lost Ark. The scene breezes by with explosions and gunfire, enduring for a remarkable amount of screentime, and yet it never loses its audience. Indeed, every scene in the story advances the otherwise frivolous plot, but they also provide an endless barrage of momentum and delightful action set-ups. And as you might expect, it all ends with the title characters alone in a Mexican standoff, the final scene unveiling some surprising twists that add unexpected layers to the characters.

Technically a marvel, entertainingly daft, The Good, the Bad, the Weird is funny, exciting, and save for the bloody knife fights, thoroughly enjoyable for general audiences. It should serve as an example to filmmakers who want to pay tribute to their inspirations without releasing a carbon copied product. While particular scenes or characters were clearly taken from other sources, the tone and setting are what prove original here. And by the end, the audience will forget about where Kim borrowed his ideas from and instead grow fascinated with how he’s innovated upon them to create this fun-loving genre pastiche. The U.S. distributors at IFC have once again chosen a wonderful film to (finally) import, but this is one that not just arthouse film junkies, but everyone can enjoy.