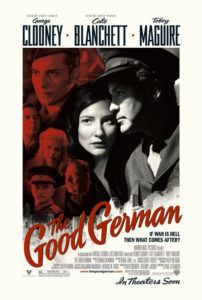 Each element of The Good German’s visual presentation recalls components used in 1940’s wartime films, specifically Casablanca, The Third Man, and A Foreign Affair—some of the best movies ever made. The film is shot in beautiful black and white and fully embraces expressionist contrasts and bold use of shadow. Cameras from the 1940’s were used to shoot the picture to give the appropriate aesthetic makeup. Steven Soderbergh, the film’s director, often concerns himself with the process itself, and he succeeds in filming some of today’s most entertaining-yet-artistic films (Solaris, Ocean’s Eleven, and Traffic). But in The Good German’s case, I found it difficult to reconcile the story with the technique.

The story begins around the Potsdam conference that confirmed borders just after WWII, before Japan’s surrender. Everyone debates as to whether all of Germany should be tried as war criminals for Hitler’s indiscretions. The city consists of half-bombed buildings, the streets filled with rubble. The Black Market is the best way for people to survive comfortably, but those involved live in fear, while those not involved more-often-than-not turn a blind eye. George Clooney is Captain Jake Geismer, an American military journalist sent to cover the Potsdam conference. The plot thickens when Geismer is drawn into a murder mystery and political conspiracy linking his German ex-lover Lena Brandt (Cate Blanchett) and his appointed driver Patrick Tully (Tobey Maguire).

Lena wants out of Berlin, so she spends her time with Tully, who works for the American military motorpool. With access to incoming and outgoing shipments, Tully rakes in the dough selling Black Market booze and other rare commodities to whomever he pleases. Maguire’s portrayal of Tully is brutal, violent, and generally aggressive, as it’s assumed that he’s been corrupted by the need to survive in Berlin. Though his character’s penchant for violence is never fully explained, Lena suggests his behaviors are the actions of a “boy.” Jake gets personally involved when he discovers Tully and Brandt are now lovers, but doesn’t realize that they’re only lovers because Lena is using him. Lena uses everyone. She sells herself to survive. She endures with Tully even though he beats her. Anything—she’ll do anything to survive and eventually get out of Berlin. Lena doesn’t take pride this behavior; it’s simply a fact of life in postwar Berlin—you do what you need to in order to survive. Berlin corrupts.

Some critics have dismissed the film, claiming the plot is too complicated to keep up with. I’m not sure why. The Good German involves murder, cover-ups, military conspiracies, set-ups, wartime horrors, and the A-Bomb, sure, but it’s no more confusing than any other wartime mystery. The best mysteries aren’t about the details, anyway; they’re about the chase. Clooney’s performance as Jake has been compared to Humphrey Bogart’s Rick from Casablanca, except unlike Bogart, the script doesn’t allow for Clooney to develop into a sympathetic character. Audiences have loved Rick for the last 65 years; I can’t see them loving Jake that long. I don’t see the valid comparison. In Casablanca, Rick becomes endearing only after flashbacks that explain his history with Ilsa (Ingrid Bergman). Because we see sections of Rick and Ilsa’s past romance, we care about their future. Jake, conversely, is a one-note character; his only drive is the desire to solve a mystery. The film shows us mere pebbles of Jake’s personal life. His alleged love for Lena is never described so that the audience might understand why this mystery is so important for Jake to solve.

Perhaps it’s her humanist intentions, the mystery around her motivations, or her sordid Nazi associations and past, but Blanchett’s Lena Brandt brings a pulpy, tangible quality to The Good German, which is otherwise absent from the film. She’s the most interesting character on the screen. Looking like Lauren Bacall, Blanchett delivers each line in a perfect deep German accent in song with Marlene Dietrich. Like Jake, her character is driven by a single desire. There’s something so passionate about her struggle that we can’t help but care for her, as damaged as she is. Is Lena a victim of circumstance, just someone who happened to be born in the wrong country—Germany—at the wrong point in history? Is she a killer? A Nazi? Can the audience, more specifically Jake, judge her for her actions, given her desperate situation? In postwar Germany, no one can survive without becoming a criminal. Lena is less of a criminal and more of a victim.

Lena, unabashedly, is also a prostitute. A film attempting to encompass 1940’s cinema, by definition, cannot depict prostitution, as it doesn’t adhere to the Hays Code of 1930. The Hays Code had three General Principles: 1. No picture shall be produced that will lower the moral standards of those who see it. Hence the sympathy of the audience should never be thrown to the side of crime, wrongdoing, evil or sin. 2. Correct standards of life, subject only to the requirements of drama and entertainment, shall be presented. 3. Law, natural or human, shall not be ridiculed, nor shall sympathy be created for its violation.

Motion pictures from the ‘30’s and ‘40’s got around these principles by simply alluding to prostitution and sex through metaphor, thus fooling the review board. But in The Good German, prostitution, sexuality, vulgar language, and the depiction of violence are all depicted without restraint. We hear the work “fuck” several times, more than I could count actually; we see brief female frontal nudity; we see that every woman in the film is a prostitute; we see graphic violence, including several people being shot in the head. Casablanca certainly wasn’t so explicit. The Good German represents both a failure and a success on the part of Soderbergh. In one way, the film is a disappointment because the script includes content not fitting with Hays rules. I can’t help but imagine how, in a way, the film would have been so much better if it completely adhered to the rules of Hays-regulated cinema. That may be my love of Golden Age cinema speaking, but I can’t resist envisioning a modern film that fully embraces classic cinema’s formal elements and constrictions.

Which leads me to the question, why shoot a film in B&W with cameras from the 1940’s if you’re not going to completely emulate 1940’s cinema, if you’re going to ignore the Hays Code? The answer to that question precisely describes why the film is a success… The aesthetics of the film wholly depict 1940’s cinema, but the plot subjects archetypes for 1940’s postwar thrillers to modern subjectifications. Like the films of Guy Maddin, The Good German is a post-modern construction taking bits and pieces of classic cinema and meshing them with reality. The Good German depicts postwar Berlin as it really was. It shows us what Hays-regulated film would have been like if they had shown the truth—the whole, unfortunate, graphic truth about what people living in 1946 Berlin, surviving from their Black Market profits, did to survive.

This story couldn’t have been told until after the Hays Code had finished its reign over Hollywood in the late 1950’s (though I bet a director with the talent of Michael Curtiz, Billy Wilder, or Ernst Lubitsch could have pulled it off). For most, the blend of Golden Age formal elements and contemporary historical observations will be a strange one. After leaving the theater, it took me some time to decide if I enjoyed this post-modern approach. Using haloed-ground such as Casablanca in an ironic fashion, in my opinion, just shouldn’t be done (The Good German blatantly uses Casablanca’s most iconic scenes as nostalgia, right down to the last scene at the airport—even the movie poster is an intentional ode to Casablanca (compare the two films’ posters at the top and bottom of this review)). The results aren’t always pleasing (Clooney’s performance), but the film is worth it, if only as a picturesque remembrance of better days and better films.