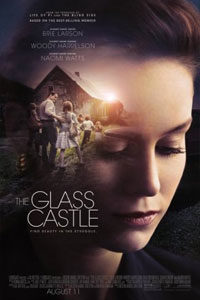 Questions about how to judge a film based on literary material often arise with lesser adaptations. Does one judge the film based on how well it translates the book into a visual medium? Does one consider what appears onscreen alone, setting aside any knowledge of the book? Fans of a book will often make excuses for what’s missing in an onscreen version, as their viewing has been informed by their time with the book, and how their imagination—an essential reader’s tool—helped shape their reading experience. Most mainstream films function differently; they remove any need for imagination. They tell you when to laugh, when to cry, and how to feel when the credits begin to roll. A good film can hide how it manipulates, leaving the viewer to either a) remain unaware of their manipulation until later assessment, or b) realize they’re being manipulated but not care because the emotional payoff was worth it.

The Glass Castle, based on the best-selling memoir by Jeannette Walls, is neither a faithful adaptation nor a film that leaves you feeling good about its manipulations. The tears it elicits are stolen by Joel P. West’s lofty score, the polished camerawork by Brett Pawlak, and the pacified screenplay by director Destin Daniel Cretton and co-writer Andrew Lanham. The dramatic arc by the final scenes feels artificial and forced upon the viewer, as does the optimistic mise-en-scène. Even the grimiest, most poverty-ridden scenes have been brightly lit and set to airy music, representing an incongruity between text and technique. Walls, a novelist and former gossip columnist, wrote of her family’s nomadic lifestyle and irresponsible parents. Her father Rex (Woody Harrellson, under a series of unconvincing wigs) was filled with imagination, spontaneity, and intelligence; however, he also suffered from alcoholism, a traumatic past, and an aversion to making the necessary sacrifices to ensure his four children had food on the table. Her mother Rose Mary (Naomi Watts) devoted herself to painting, while also hiding money from the rest of the family, feeding herself and not the children, and allowing her family to suffer despite owning a small fortune in Texas land.

Brie Larson, having worked with Cretton on her breakthrough Short Term 12 (2013), stars as the adult Jeannette. In 1989 New York, Jeannette works as a successful writer and is engaged to an ambitious investment banker (Max Greenfield). Her modern day life is interrupted with long flashbacks to her childhood, when her father and mother migrate from one ramshackle home to the next, evading bill collectors, losing jobs, and sometimes being pursued by police. Alongside her three siblings, two girls and a boy, Jeanette idealizes her father. As the children grow, they become tired of always moving and never having enough food, eventually realizing their parents have no interest in taking care of them. Consider a sequence where the children have not eaten in three days. Rex finally decides to raid Rose Mary’s secret stash of money (Which he knew was there all along, so why wait for three days?) and promises to return with a feast. As the day passes into the night, the children still haven’t eaten. Rex finally comes home drunk with wounds from a brawl, and the film never addresses how and when the children finally ate. 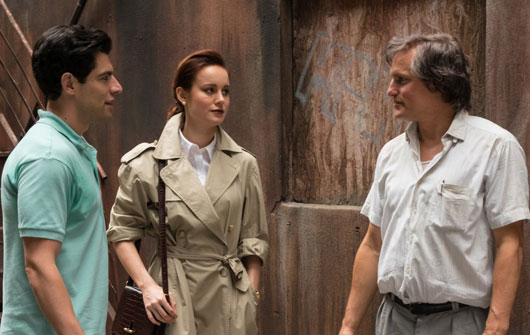 Something like last year’s alternative parenting comedy Captain Fantastic might come to mind, but at least Viggo Mortensen’s anti-establishment father had enough sense to teach his children to provide for themselves, educate them in ways far more advanced than traditional schools, and create a strong moral foundation. No matter how many good memories the children may glean from their erratic upbringing, any notion that Rex and Rose Mary are good people seems unrecoverable after they learn a family member sexually abused their son, and then they choose to ignore the problem. (In the book, the lack of food and selfishness of Walls’ parents gets even worse than depicted in the film.) And while reading about Walls’ experiences replicates the author’s clement headspace, the visual element of the film is not so forgiving. Showing all that horrible, negligent behavior onscreen would have put the audience at an unsympathetic distance. But Cretton sought a happy ending to his film, no matter how inauthentic or manufactured it may feel. To achieve this, he washes over the uglier scenes from the book, but he also concocts a saccharine ending that puts every ugly incident out of mind by the end credits.

Cretton’s ending suggests everything is going to be hunky-dory, but how can it be? Rex and Rose Mary have scarred their children, in one case quite literally. As the cheery music swells and everyone laughs over their Thanksgiving dinner in the last shot, the image seems incompatible with how we feel. In reality, the family lives with the imbalanced memories of parents that were both joyfully irresponsible and frighteningly unstable. Rather than admit it’s more complicated with an optimistic attitude toward an unfortunate situation, the film exalts Rex and Rose Mary with utter absolution. Perhaps this is Jeannette Walls’ take; but if that’s the case, the film has not properly captured her perspective. Only the actors’ power to convey the necessary emotional heft of a given scene feels real, regardless of how the screenplay sometimes reads like a made-for-TV melodrama. Most of the child actors—especially Ella Anderson, who has the most screentime playing Jeannette as a preteen who gradually realizes, through her blinding love for her daddy, that he’s not doing his job as a father—outperform the adults. Meanwhile, the older actors must endure a series of cheap wigs, dye jobs, and inconsistent accents in a misguided attempt to mimic the real family’s appearance. Larson, Harrelson, and Watts each deliver strong performances, though they’re hampered by the stagey screenplay.

During the end credits of The Glass Castle, the film shifts into documentary footage of Walls and her family. The footage is grainy, unpolished, handheld, and contains an appropriate sense of realism. These few moments suggest everything that the preceding film could have been but wasn’t. Showing the real-life counterparts to dramatized characters is an unfortunate trend in mid-level productions that happen to be based on a true story. Last year, titles like Hacksaw Ridge and Patriots Day included footage of the actual people involved after the dramatized film, and the difference between reality and cinema became a jarring, unpleasant one—serving only to diffuse the effectiveness of these films. Similarly, watching the final camcorder footage of The Glass Castle makes one realize that a vérité style, or at least something more akin to Cretton’s realistic approach on Short Term 12, would have served this material better. Instead, the film’s artificiality exposes its manipulations, rendering them impossible to ignore.