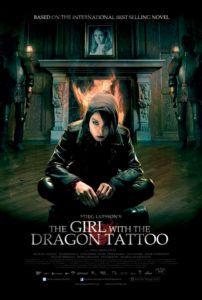 Author Stieg Larsson’s “Millennium Trilogy” has sold millions of copies the world over, drawing a following of devoted fans who couldn’t wait to see them made into movies that would disappoint them. Sweden obliged, and the book-to-film adaptations were released in 2009; they’re slowly but surely making their way stateside to arthouse theaters. Of course, Hollywood already has plans to re-adapt the books into English-language films in the coming years, so lazy U.S. audiences don’t have to deal with pesky subtitles. Literate moviegoers don’t have to wait that long—they can see the imported first film of Larsson’s trilogy, The Girl with the Dragon Tattoo, now and realize that there are some literary potboilers that just don’t translate well to film.

Larsson’s recurrent protagonist is bisexual computer hacker Lisbeth Salander (Noomi Rapace). One character describes her as “a little odd”, and by the end of the film, we know it’s not just her spike-collared goth appearance that he’s referring to. Coming from a criminal past, with psychological problems only vaguely alluded to, Lisbeth has a broken childhood and a taste for fire. Her appearance does the character a disservice and makes her less interesting and less dynamic. How predictable is it that the ‘damaged goods’ hero dons dark makeup, has strands of her greasy black hair covering one eye, rides a motorcycle, sports several facial piercings, and has a sordid past? Not predictable at all. As is, she’s more of a ‘type’ than a fully realized, three-dimensional character.

Anyway, Lisbeth eventually teams up with the defamed Mikael Blomkvist (Michael Nyqvist), a journalist for Stockholm’s Millennium magazine. Before serving a sentence for libel, Mikael takes a job for aged industrialist Henrik Vanger (Sven-Bertil Taube) to investigate the vanishing of his niece Harriet, who disappeared some forty years ago on his family’s island. Henrik suspects that someone in his twisted Vanger family has murdered Harriet and kept it a secret for decades. But before Lisbeth joins Mikael, she must contend with her new probation officer, a pervert who demands that she exchange sexual favors for personal freedoms. She gets him back, though… And when she does, she’s free to assist Mikael. She joins him at Henrik’s cottage and investigates the Vanger clan, while also inciting an obligatory romance between male and female protagonists.

Based on Lisbeth and Mikael’s findings, one in five Swedish people are either rapists or have been raped. There’s so much rape content here that it’s a conspicuous theme, forced upon us like, well, you get the idea… As expected, the scenes involving rape are disturbing and uncomfortable to watch. However, the film’s director, Niels Arden Oplev, seems to revel too much in those sociopathic scenes of bizarre violence and sadistic sexual behavior, enough to deem the material intentionally morbid for the sake of morbidity. Toss in a dildo, a handful of fascists, and some father-son strangulation lessons, and you have yourself a story that tries too hard to delve into Silence of the Lambs and Se7en territory but doesn’t grasp the same sense of character depth.

For all its attempted strangeness, the story contains some standard mystery-thriller tropes that are all too identifiable and eye-rolling in this context. Several research montages, with characters toiling away in the archives and manipulating vintage photos to reveal hidden secrets, skim over the audience’s involvement in clues. It’s the kind of mystery that forces us to sit through several hair-pulling explanations which eliminate any hope for dramatic mystery. In one scene, the unmasked killer recounts his lifelong scheme to Mikael (and the audience), inexplicably answering all the questions we’ve formed throughout the course of the film in way-too-convenient detail. In another scene, a surprise character explains every other question that the killer doesn’t cover. In all, the answers to everyone’s questions are wrapped up in a nice little bow.

Oplev’s greatest assets here are his actors. Perfectly cast, newcomer Rapace gives her role a blazing intensity; she can’t help but leave you pondering what other secrets from her character’s past lingers behind those fragile yet angry eyes of hers. It would be surprising if she didn’t receive some awards consideration for her performance(s) in the role. Opposite Repace, veteran actor Nyqvist offers more gravity to his role, even if his character has fewer outright expressive qualities. The direction is serviceable, as Oplev attempts the dark style and tone of a David Fincher film, except without the fluid visual bravado. (Incidentally, Fincher is in talks to helm the English-language versions of Larsson’s trilogy.)

Running two-and-a-half hours, The Girl with the Dragon Tattoo drags on and on, with the final few scenes dangling an ending that, for a while, never seems to come. The film’s baffling popularity might be attributed to what I’m calling ‘The Twilight Effect’—my term for devoted readers of a book filling in the dramatic blanks with their memories from their reading, making the film adaptation better in their minds because of their time with the books. No doubt Larsson’s books, which this critic did not read, provide a far superior experience. But as a film, this is just another morbid murder mystery that will have devotees to Larsson telling you, “But you have to read the books to appreciate the movie…” If that’s true, then why bother with the movie, or its forthcoming sequels The Girl Who Played with Fire and The Girl Who Kicked the Hornet’s Nest? Just read the books for the complete experience and save yourself from a mediocre-if-watchable movie.