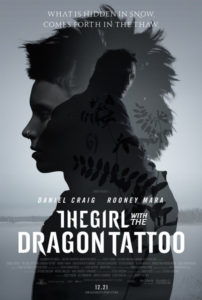 Stieg Larsson’s posthumously published Millennium novels have generated millions from their devoted international following, both in book form and in the 2009 Swedish film adaptations, making it only a matter of time before Hollywood dipped their finger in the honeypot. Fortunately, director David Fincher has spearheaded the English-language adaptation of The Girl with the Dragon Tattoo, Larsson’s first novel in his mystery-thriller trilogy. Along with a bold performance from newcomer Rooney Mara, the director makes up for formulaic banalities in Larsson’s storytelling by incorporating a formal elegance into the film’s sordid events. Fincher’s sophisticated treatment imbues this tale of corruption, sexual assault, and trauma with a textured hand; and in addition to surpassing the Swedish versions, he gives the story new life.

Though the original Swedish films were widely popular in Europe and quite successful in their limited U.S. distribution, they were sloppily assembled from a cinematic perspective, particularly the latter two. Niels Arden Oplev helmed the Swedish version of Larsson’s first book, and his approach found the author’s damaged hero, goth hacker Lisbeth Salander, first played by Noomi Rapace, the victim of equally fetishized rape and lovemaking scenes from Oplev’s voyeuristic camera. Given Larsson’s quasi-feminist intentions with his novel—originally titled “Men Who Hate Women”—Oplev’s presentation harbored mixed sexual messages, as if the director didn’t know whether to view Salander as a sex object, a victim, or both at the same time. Moreover, Oplev’s direction failed to instill suspense throughout this otherwise involving whodunit, delivering underemphasized chase scenes and several missed opportunities to infuse some much-needed style into the proceedings.

Admittedly, by the time the Swedish films had made it to the U.S., talk of Fincher’s involvement in the English-language adaptations had already begun, leaving the viewer to consider the Swedish films while asking an unfair question: How would Fincher have done this differently? Along with his writer Steve Zaillian, Fincher places emphasis on all the right elements of Larsson’s story and resists spoiling the experience with misguided traces of voyeuristic misogyny. The cliché aspects of Larsson’s storytelling, propelled by requirements of the genre itself, are at times masked by Fincher’s technically immaculate presentation. Every frame radiates with Fincher’s signature poise and the mood of a carefully considered Hollywood production, and the result draws the viewer into Larsson’s story far more than the Swedish films ever did. 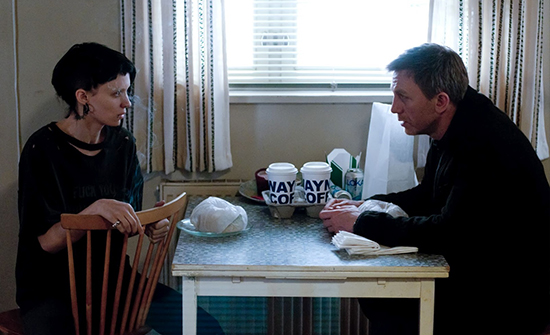 Strangely enough, Fincher’s take feels like a marriage between James Bond fare and moody Swedish noir, starting with the opening titles, a music video sequence equipped with visual and aural undertones of Larsson’s trilogy. Sung by Karen O and arranged by scorers Trent Reznor and Atticus Ross, an incensed rendition of Led Zeppelin’s “Immigrant Song” wails as images of animals, fire, technology, and violence urgently fill the screen, setting the film’s tone by evoking an unsettling pitch. From this assemblage of potent imagery comes our resident Bond, Millennium magazine’s top journalist Mikael Blomkvist, played by Bond himself, Daniel Craig. Opposite Blomkvist is Salander (Mara), whose troubled past has left her in a defensive stance toward the world. In Fincher’s dark Bond-esque riff, she’s the “Bond girl”—but unlike anyone ever seen in your usual 007 movie: She’s independent, self-reliant, and far from being a mere sex object.

Larsson’s yarn finds two seemingly separate stories, Blomkvist’s and Salander’s, intersecting about halfway into the film. After being publicly defaced, Blomkvist is hired by Henrik Vanger (Christopher Plummer, wonderful), aged patriarch of the demented, wealthy Vanger family, to investigate the disappearance of Harriet, Henrik’s niece who vanished from the family island some 40 years ago. Henrik believes she was murdered by someone in the family; under the pretense of writing Henrik’s memoirs, Blomkvist moves onto the Vanger property to investigate. Meanwhile, the pierced and tattooed Salander, a ward of the state deemed incapable of watching out for herself, contends with a new, sicko guardian (Yorick van Wageningen), who takes advantage of her situation, demanding sexual favors before he allows her financial freedom. After he brutally rapes her and she takes her revenge, she’s hired on as Blomkvist’s researcher and puts her hacker skills to use. Together, they uncover a Bond-esque supervillain within the Vanger family, one who monologues about his dastardly plan and lifelong obsession with killing women before ridding himself of the hero. In typical Bond format, the villain monologues for too long and thwarts his own plans.

Fincher retreads themes from his previous work throughout the film, from serial killers (Se7en) to investigatory obsession (Zodiac), from anti-socialism (Fight Club) to computer technology (The Social Network). In attendance, these elements make it so that, down the road, The Girl with the Dragon Tattoo will seem like ‘a David Fincher film’ despite its inclusion in the larger franchise. Along with another subtle, moody score by The Social Network’s Oscar-winning composers Reznor and Ross, Fincher’s imprints are all over the project, but not with the freedom we’ve come to expect from his work—there are few wowing camera movements or computer-enhanced tracking shots. But Fincher’s highly textured visual palate proves superior to Oplev’s, and his handling of the subject matter never sends mixed messages about Salander’s sexual presence within the story or the villainy of the Vanger family. In the end, Larsson’s censure of The Powers That Be remains intact and stronger than ever. 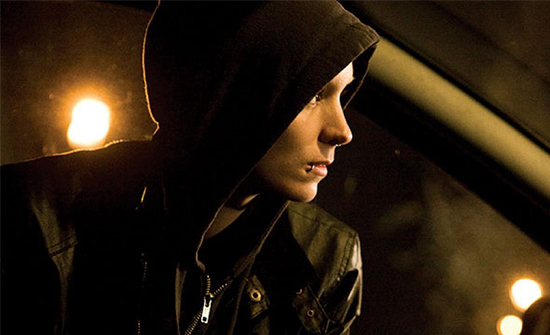 Noomi Rapace’s Salander in the Swedish originals smoldered with intensity, her understated performance fuelled by hidden rage more than her character’s mysterious persona. Mara (best known from The Social Network as Mark Zuckerburg’s ex-girlfriend in the opening scene) offers something else entirely; her portrayal has far more layers and a crucial degree of The Unknown. Mara’s version, punked-out in leather and a mohawk just like Rapace’s, appears vulnerable, her petite frame and meek outer shell painted black.  Her black hair and makeup overtake her bleached pale eyebrows; the effect brings attention to everything but Salander’s expressions, feelings—which, of course, she’s trying to conceal—denoted by her eyebrows. Rapace looked like a capable and strong woman, whereas Mara (who actually underwent several piercings for the role) looks girlish, vulnerable even, until she proves to the audience and everyone onscreen that she’s not someone to be underestimated. While both performances are great, Mara’s works better to enhance her character’s dramatic turns within the story.

But all of Fincher’s classy directorial traits and Mara’s breakout performance can’t help the fact that Larsson’s story suffers from some clunky developments and structural issues. Not even a writer of Zaillian’s talent—he penned Schindler’s List and American Gangster—can make the inevitable shacking-up between Blomkvist and Salander any less forced or eye-rollingly requisite, at least not by remaining true to the novel, which he does. The sudden, rather random romance between Blomkvist and Salander never makes much sense, except for the movie rule that when a man and a woman spend a prolonged amount of time together, they’re bound to have sex. As for Larsson’s other missteps (such as the way both the killer and another key figure offer long expository speeches in the finale), Fincher washes over them with his expert cast and his fine-tuned thriller pacing. Too, the film breezes by in spite of the 2-hour-and-38-minute runtime, even if Larsson’s falling action goes on for much too long after the story’s climax.

Easily the most compelling entry in Larsson’s trilogy, The Girl with the Dragon Tattoo is followed by two increasingly humdrum sequels that Hollywood will inevitably re-adapt, depending on the success of this first film. The bad news: Fincher has yet to sign-on for The Girl Who Played with Fire and The Girl Who Kicked the Hornet’s Nest. Whoever helms these sequels will likely underwhelm without Fincher there to augment the production value with his personal flourishes, so here’s hoping it’s someone of comparable talent. Fincher does much to make Larsson’s pulp storytelling consumable beyond your usual commercial mystery, and without him, it’s doubtful the sequels will be the gripping experience this film was. Mara catapults herself into stardom and Craig reminds us why his presence is such a magnetic one. But it’s Fincher that plays up those Bond-esque elements from the title sequence forward, making the film into a dramatic adventure following familiar, yet remarkably executed formula.