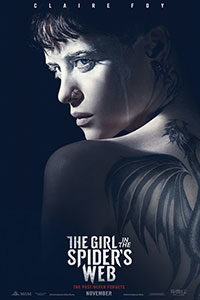 It didn’t take long for Hollywood to spoil Swedish author Stieg Larsson’s Millennium franchise, reducing it to nothing more than an exploitable hunk of brand-name recognition. Larsson’s creation of Lisbeth Salander was a searing portrait of a damaged and edgy cyber-hacker, though more aligned with an outrage perspective than a cohesive feminist one. In each screen adaptation, beginning with the 2009 Swedish trilogy starring Noomi Rapace (The Girl with the Dragon Tattoo, The Girl Who Played with Fire, The Girl Who Kicked the Hornet’s Nest), the complexity and appeal of the character has been simplified for audiences. The original versions failed to fully adopt the protagonist’s point of view in troubling ways, shooting its sexual assault scenes with a leering, voyeuristic eye. David Fincher’s 2011 English-language version of Larsson’s first book, starring Rooney Mara, corrected those issues and, in its aesthetic superiority, draws on aspects of Larsson’s treatment that resemble the James Bond series, emphasizing them with a psychedelic title sequence and a villain who explains his master plan to the incapacitated hero. The Girl in the Spider’s Web also borrows these traits from 007; but Fincher elevated them within his severe treatment, while the new movie lowers itself to embrace a commercially familiar mode. Everything about the movie, down to the characterization of Salander, as played by Claire Foy, is presented in simplified terms. This is comic book fare, and Salander is a superhero on par with The Punisher and Batman.

The Girl in the Spider’s Web was based on the 2015 novel by David Lagercrantz, who took over the book series after Larsson’s death in 2004. Others have described the movie as a “soft reboot” or a “sequel” or both, creating confusion about its relationship to Fincher’s version. To be sure, there’s an issue of continuity that compares to those of the Batman, Spider-Man, and X-Men properties. In fewer than ten years, Lisbeth Salander and her counterpart, Millennium journalist Mikael Blomkvist (Michael Nyqvist, Daniel Craig, and now Sverrir Gudnason), have been played by three talented performers in two, possibly three separate screen continuities. Whereas the tight-knit Swedish trilogy ensured a consistent characterization, it’s questionable what the viewer is supposed to know about our hero going into this adaptation, directed by Fede Álvarez (Evil Dead, Don’t Breathe). For instance, her history as a sexual assault victim is an essential, character-defining detail, and yet screenwriters Jay Basu, Steven Knight, and Álvarez omit any detailed reference to this. What made Salander interesting is how her outward actions shielded her secretive inner turmoil, driving her to prevent or punish the kinds of physical and psychological trauma she experienced in her past.

But The Girl in the Spider’s Web concentrates on the world-in-peril plotting instead of exploring its protagonist’s inward battles. Indeed, this most recent Hollywood production has reduced Salander to a black-clad vigilante who, instead of avenging the crimes of men against women, saves the world from nuclear disaster. In recent years, Hollywood has become obsessed with the hyperbole of a nuclear threat, introducing the element into The Fate of the Furious (2017), two Mission: Impossible sequels (Ghost Protocol and Fallout), most Jack Ryan fare, and countless other franchises. It’s a real-world equivalent to a super-villain bent on destroying the world. And so, this movie has a comparatively simple plot next to The Girl with the Dragon Tattoo‘s—an intricate murder mystery that exposed patriarchal, political, and class corruption among Stockholm’s elite. The Girl in the Spider’s Web features an elaborate international conspiracy, a secretive crime syndicate, and a baddie who, like her main henchman (Claes Bang, behind bleached hair and blue color contacts), has a distinct appearance. Comparisons to the James Bond franchise remain appropriate.

The setup involves a former National Security Agency employee, Frans Balder (Stephen Merchant), who enlists Salander to hack into the NSA’s databanks and repossess a program he designed, called Firefall, which accesses the nuclear launch codes of other world powers. He suddenly realized that giving control over the world’s nuclear arsenal to just one country is a bad idea (go figure), and pays Salander to retrieve it. After quickly hacking into the NSA, Salander obtains the dangerous program and stores it on her laptop. But Russian goons attack, steal the laptop, and nearly kill our hero. Meanwhile, Balder appeals to Swedish Secret Service’s deputy director Gabriella Grane (Synnøve Macody Lund) to protect him and his son August (Christopher Convery) from those seeking his encrypted program. At the same time, NSA agent Edwin Needham (Lakeith Stanfield) comes looking for both Balder and Salander to investigate the illegal intrusion. Soon enough, these various parties realize they’re all on the same side, since the band of Russian goons, taking orders from Lisbeth’s twin sister Camilla (Sylvia Hoeks), has kidnapped August—the key to gaining Firefall’s access code. Of course, it’s up to Lisbeth to rescue the boy, stop the nuclear launch codes from falling into the wrong hands, and confront her evil sister. On the periphery, Blomkvist (Sverrir Gudnason) helps out, alternating between his obsession with Salander and his affair with publisher Erika Berger (Vicky Krieps).

Álvarez replicates the tone of a gritty superhero yarn, with emphasis on action sequences and visual stylization more than the potential dimensionality of Larsson’s characters. Everything has been simplified to stock types for the broadest possible appeal. Take Camilla’s character, who’s nothing more than a comic book creation; she’s obviously an arch-nemesis since her appearance is the inverse of her sister. Camilla and Lisbeth are the yin and yang of siblings: Lisbeth wears black makeup, dies her hair black, has dragon tattoos, and dresses in a dingy goth wardrobe; Camilla has a near-albino complexion, has near-white hair and eyebrows, has spiderweb tattoos, and dons crimson red outfits. A thin backstory hints to a profound betrayal on Lisbeth’s part, which the screenplay never adequately explores. Rather than mine the loaded relationship between these sisters, the movie is content with pitting them against each other in a banal high-stakes scenario. Similarly, the relationship between the protagonist and Blomkvist, otherwise central to the series, it treated with an assumed import here. But this is true of all the characters, each described in a cinematic shorthand that robs them of any intricacy.

Although Álvarez demonstrates a visualist’s attention to detail and atmosphere, he seems to be trying to replicate the look and feel of Fincher’s version—which, by comparison to other Millenium series adaptations, is a masterpiece. Cinematographer Pedro Luque uses several long, digitally enhanced tracking shots and the brown soup visual textures employed in Fincher thrillers (Zodiac, The Game, Gone Girl, etc.). The location shooting in Germany and Sweden, of course, adds some scenery appeal to the movie’s dour, overcast tonality. The formal elements of the movie are mostly solid, whereas the trouble lies in the silly plot and hackneyed storytelling. Consider the finale, where Salander finds herself captured and certainly doomed—only to be saved by a deus ex machina in the form of an unlikely team: another hacker and an unexpected sniper. Foy, ever the chameleon, gives a strong performance, but in a role that is underwritten and doesn’t service her considerable talent. All of this leads to the inevitable conclusion that, because The Girl in the Spider’s Web will undoubtedly fail to restart the franchise, audiences should expect that, in a few years, we’ll see a fourth reboot.