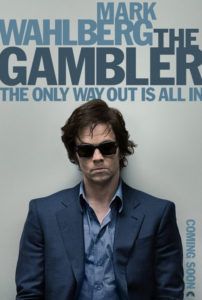 A superbly well-assembled remake of the 1974 original of the same name, The Gambler serves as a showcase for the directorial talents of Rupert Wyatt, the British filmmaker of 2008’s underrated The Escapist and 2011’s underdog hit Rise of the Planet of the Apes. Working from a script by The Departed writer William Monahan, which closely follows the major plot points of James Toback’s original screenplay, Wyatt demonstrates supreme confidence in his subtle but noticeable stylization. Despite its expert formal presentation, the film features a miscast Mark Wahlberg playing—quite unbelievably—a self-destructive, Harvard-educated college literature professor. And Monahan’s intellectual, blistering dialogue, though tuned with the same tough guy brogue that earned Wahlberg an Oscar nod for The Departed, rises above Wahlberg’s level of talent.

Wahlberg, though primed for his roles in The Fighter and Boogie Nights, doesn’t have the capacity for the multi-dimensional performance required here, which was previously achieved by James Caan. When the project was first announced in 2011, Martin Scorsese was attached to direct opposite star Leonardo DiCaprio; even with that lineup, Toback objected to Paramount Pictures’ remake plans. He changed his tune once he was granted executive producer credit, along with the original producers Irwin Winkler and Robert Chartoff. And given Wyatt’s versatile talent thus-far, who wouldn’t jump on board? Along with Pete Beaudreau’s sharp editing and Greig Fraser’s muted, almost grayish lensing, Wyatt brings careful style, including an excellent soundtrack of rock and blues classics: “That Glow” by St. Paul & The Broken Bones, “Common People” by Pulp, and “Airwaves” by Ray LaMontagne.

While the original took place in New York, the setting has been relocated to Los Angeles, where Wahlberg’s gaunt Jim Bennett (Wahlberg lost a reported 60 pounds for the role, most of it muscle mass from his earlier two ‘roided films under Michael Bay) spends his evenings losing big to various underground gangsters. What excites him is not the prospect of winning, but the idea of losing everything—including his life—because Lady Luck dealt him the wrong card. And so, just after the death of his wealthy grandfather (George Kennedy), from whom he’s told he’ll inherit nothing, Jim accumulates a $240,000 debt to Korean crime lord Mr. Lee (Alvin Ing). Rather than worry or run, Jim’s only plan is to rob Peter to pay Paul. He borrows another $50,000 from a ruthless loan shark named Neville Baraka (Michael Kenneth Williams), and when he loses that, he goes to an even more ruthless loan shark named Frank (John Goodman, who’s excellent, bald, and mostly shirtless).

Jim’s acerbic mother (Jessica Lange) and even Frank try to talk him out of borrowing the cash, but Jim waxes philosophical in response, just as he does in the classroom. His lectures—which are supposed to be about the modern novel but devolve into tirades about the meaninglessness of trying to write when so few genius-level writers exist—leave most of his students blank-faced, except three: Lamar (Anthony Kelley), a junior basketball player who wants to go pro now for the money; Dexter (Emory Cohen), a tennis prodigy; and Amy (Brie Larson), who may be the only brilliant writer in the class, and who Jim seeks to bed. They’re all wrapped up in Jim’s slapdash plan to erase his debt and give up gambling, but getting there means the audience has to endure a punishing amount of his complacent, self-satisfied, and suicidal behavior. It’s all very tiresome because Jim is despicable and not a very nice guy, but not in the congenial way that DiCaprio was despicable in The Wolf of Wall Street.

By the end, it’s difficult to care about Jim as Wahlberg represents him, even more so after he essentially escapes his troubles and achieves an unlikely contentment—a far more optimistic, less believable, and less bloody conclusion than director Karel Reisz offered in 1974. It never quite congeals how a person as angry and disenchanted with the pointlessness of existence as Jim could then, suddenly, find something worth living for, at least not in this context. Wyatt, Monahan, and Wahlberg are all far too concerned with making Jim a smart, fuck-the-world badass that they’ve forgotten to develop a believable romance to validate their supposed happy ending. At the root of The Gambler, there’s no understanding Jim or his unreachable personality, leaving him impossible to have sympathy for or empathize with, therein leaving the film an empty experience.