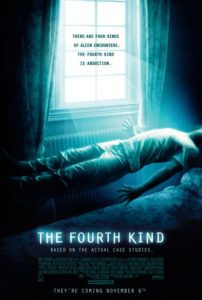 Astronomer J. Allen Hynek’s classification for contact with life on other worlds goes as follows: The First Kind occurs with UFO sightings; The Second Kind is when there’s an effect left over from a UFO sighting, such as radiation or crop circles; The Third Kind means sensory contact with the beings themselves; The Fourth Kind indicates alien abduction. The Fourth Kind is also the name of director Olatunde Osunsanmi’s faux-documentary mystery-thriller, one of the most annoyingly pretentious, wholly unsuccessful movie gimmicks to come out of Hollywood in years.

Osunsanmi, as well as this film’s marketing department, have gone to considerable (if superficial) lengths to make you believe what he’s showing you is “actual footage” and that his scenario is “based on a true story.” Don’t believe it. This contrived experience, completely fabricated by Osunsanmi, does a shoddy job of pulling a veil over our eyes. The director believes that he’ll gain the viewer’s trust by lying about his honesty. Even his actors are in on it. In the first scene, his star Milla Jovovich introduces herself by name; she says that she’ll be playing Dr. Abigail Tyler, a psychologist from Nome, Alaska, who witnessed some very disturbing events a few years back. To this, we’re supposed let our guard down and believe what we see, because how often does an actor expose the pretense of a motion picture within the motion picture?

Dr. Tyler has noticed similarities between several of her patients’ hallucinations; three in particular, and all share the vision of an owl staring into their bedroom window. After administering hypnosis sessions with her colleague (Elias Koteas), she believes her patients are victims of alien abduction, much to the disbelief of the local sheriff (Will Patton). But then the sheriff has doubted Dr. Tyler’s stability ever since her husband was murdered one night next to her in bed. Still, the movie points out that Nome holds a high missing persons rate, and the FBI has visited there some ten times more than the considerably larger city of Anchorage. When Dr. Tyler’s daughter disappears, her involvement becomes more personal, her methods more desperate. As a result, the case footage becomes louder and more indecipherable.

The movie’s structure is muddled, and it distances the viewer instead of drawing us in. The filmmakers use supposedly authentic footage of “the real” Dr. Tyler’s interview with Osunsanmi, who appears onscreen nodding blandly. They show us clinical tapes from Dr. Tyler’s sessions with her patients, suspected alien abductees, redundantly playing them alongside dramatizations. A needlessly split-screen tells us the same story in two formats, one allegedly real and the other reenactment. Why we need the same story twice is beyond understanding. But in truth, both presentations are contrived. The “real” footage gets conveniently fuzzy when something interesting starts to happen, such as a patient levitating, and Osunsanmi never comes close to showing us aliens. And then behind it all, there’s the theory that aliens speak in Sumerian, or rather, Sumerians spoke in alienese. Believe that if you will.

The Fourth Kind is nothing more than an elaborate hoax to draw UFO enthusiasts, the same way horror fans went to see Paranormal Activity believing it was real. But afterwards, both movies prove completely unsatisfying and entirely fabricated. And where the latter had the benefit of being entertaining, Osunsanmi’s shoddy documentary footage is just insulting. Somewhere in here is a sufferable yarn about aliens visiting Nome, AK, but in the Information Age, when disproving claims to fact are a mouse-click away, pulling a fast one on your audience requires skill that Osunsanmi simply doesn’t have.