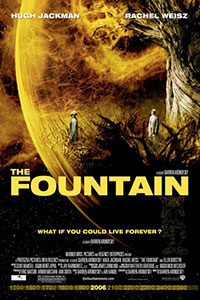 On the surface, Darren Aronofsky’s The Fountain seems to be a triptych exploring our anxieties about death, as well as the human desire to achieve immortality. Part historical fantasy that reaches a fateful conclusion, part funerary study of loss, and part psychedelic journey into the infinite, the film contains a massive textual and existential scope, with three intersecting stories each set 500 years apart. Revisiting the film after more than a decade since its release, it’s impossible to deny the talent involved in its creation. But the story is much simpler than its self-seriousness and tonal dourness suggest. The two bookending stories in Aronofsky’s three-tiered structure remain verbose and obvious extended metaphors to capture the inner emotions of the middle story and, as a result, the entire picture means less than its far-reaching implications. Although The Fountain opened in 2006 to divisive reactions, from boos at its Venice Film Festival premiere to dissenting responses among critics who felt the auteur director’s ambitions had extended beyond his talent’s reach, the film has enjoyed a cult following. Midnight madness screenings have cropped up around the country, and viewers have projected endless meanings onto the director’s use of transitions, repetitive imagery, and grandiose themes. Even so, The Fountain carries less weight than many viewers suspect; all of Aronofsky’s considerable effort doesn’t amount to much.

After Aronofsky became a cult and indie sensation with his first two features, several of his developing projects fell through for one reason or another (he wanted to adapt Frank Miller’s Batman: Year One or Theodore Roszak’s novel Flicker), as he tried to elevate himself from a low-budget filmmaker to something resembling mainstream (see his religious fantasy Noah, from 2014). His first two films would be representative of a trend in his work, lasting through mother! (2017), where the filmmaking itself reflects the mind of his protagonist. Pi (1998) followed a mathematician driven mad by his obsession with number theory, and given this madness, the erratic formal style and high-contrast black-and-white photography captured the absolutism of the character. Requiem for a Dream (2000) dove into the inner monologues of his addict characters, and its rapid-fire cutting introduced viewers to the notion of addiction as a series of frenzied decisions until the ultimate escape. For the next six years, he tried making The Fountain, originally planned as a $100 million epic starring Brad Pitt and Cate Blanchett in the central roles. But when he was forced to compromise the initial plans, it became a $35 million picture starring Hugh Jackman and Rachel Weisz. Not that Aronofsky’s ambitions were curbed by the monetary concessions. 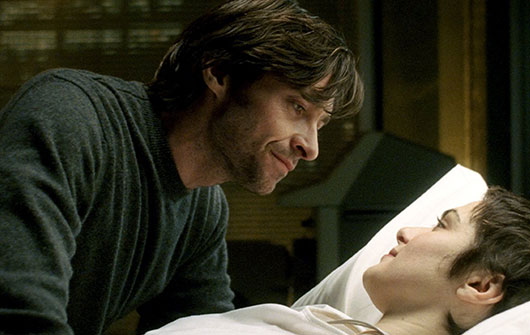 Any official synopsis will tell you The Fountain contains three intercut stories, although the discerning viewer will realize there’s just one: Tom Creo (Jackman), a medical researcher trying to discover a cure for the tumorous brain of a monkey, also suffers the gradual physical deterioration of his wife, Izzy (Weisz). Tom desperately wants to find a cure for the monkey, because he can then use it to stop the progression of Izzy’s disease. Meanwhile, Izzy has nearly completed the manuscript for a novel, and she wants Tom to read it, even complete the final chapter after she’s gone. As Tom reads, the two stories from Izzy’s book become the two other stories that have been intercut into the film since the opening shots. The first involves a Spanish Conquistador, Tomas (Jackman), searching for The Tree of Life in the Mayan jungles, all to preserve the rule of Queen Isabella (Weisz) with an immortality elixir. The other story follows a space traveler, Tommy (Jackman), an extension of Tom who, inside a bio-bubble with the dying Tree of Life, drifts into a dying star and achieves some manner of transcendence. The futuristic story is almost certainly written by Tommy to complete Izzy’s book.

Much as his audience experienced later with mother!, making an emotional connection to Aronofsky’s characters proves more challenging than decoding his laborious, tiresome metaphors. Most apparent are the connections between Tomas/Tom/Tommy or Izzy/Queen Isabella, from their shared names to their mutual objectives. Some of the metaphors are biblical, as with references to Genesis and the Fall of Man, and how mortality ultimately defines what it means to be human. The brevity of life makes it special, the film seems to say, and it’s Tom’s eventual understanding of this that signifies the film’s final, showy culmination when Tommy, having been consumed by the dying star, becomes a Zen-like figure who exists in all stories—passing his newfound understanding about the purpose of life between them. Somewhere in the ostentatiousness of this story is a thoughtful perspective on the natural order of life (that we die). But again, like mother!, the agreeable themes explored by Aronofsky are undone by treating simple ideas like profundity itself.

The Fountain shows signs of its limited budget in the special FX, including several early-2000s-style shots that look computery and digitized today. To disguise the cheapness of the CGI, cinematographer Matthew Libatique shoots in an overexposed style, similar to what Janusz Kaminski did for Steven Spielberg on Minority Report (2002) and War of the Worlds (2004). Except the bright light that shines through most scenes in Aronofsky’s film appears to be false, a synthetic trick realized by computers rather than a heightening of the existing light in the frame, and it has an unpleasant look of artificiality. This is unfortunate, as Aronofsky and Libatique conceive of occasionally breathtaking imagery. A long path of water in the Mayan scenes leads to a massive tree from which Tomas drinks a glue-like elixir, causing him to grow plants from a wound until the plants eventually consume him. Striking shots of Tommy’s bio-sphere drifting through a spatial plane have a sense of awe, too. But the phenomenal visuals that accompany each story become superfluous ornamentation once the larger (meaning smaller) purpose of the film is realized. 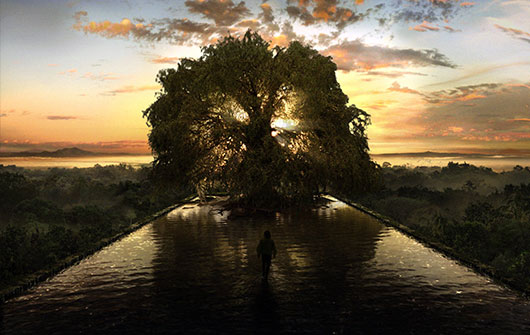 Similar to what Aronofsky achieved on Requiem for a Dream with visual rhythms, the director and his editor Jay Rabinowitz cut between the three timelines with an intentional connectivity, often echoing earlier scenes. The last 15 minutes repeat footage from earlier in the film, making connections between the three stories that the viewer already made far earlier in the film. They’re not hard to miss, as visual transitions connect the modern day story with the past and future through Izzy’s book. A moment in Tomas’ story, for instance, leads to Tom dropping Izzy’s manuscript, followed by Tommy floating in space, each transition riding the same emotional wave. The conceit of The Fountain distracts from its dramatic potential by placing its energies on the overarching metaphors, and not, say, the otherwise superb performances by Jackman and Weisz. Although Weisz, Aronofsky’s wife at the time, plays a sort of benevolent dying woman who has optimistically accepted her fate, Jackman displays an aching desperation and intensity the viewer can never fully appreciate given the film’s incessant rhythms and metaphors.

The real tragedy of The Fountain is that Aronofsky doesn’t allow his audience to exist with his characters, and the emotional weight of the stories is squandered on an overt, pretentious symbolism, which, more than the drama of the story, remains the film’s raison d’être. Additionally, its 96-minute runtime feels curt and abrupt, whereas a longer, more relaxed experience could have created the due associations between past, present, future, love, life, death, and acceptance more elegantly—as Andrei Tarkovsky did in Solaris (1972), for example. Even so, the film’s theme is beautiful, perhaps more so than any other Aronofsky film. It accepts that death does not need to be an ending, rather it can lead to new life: Tomas drinks from the tree of life and dies, only to decompose and bring life to an outcropping of flowers; from Izzy’s death, Tommy is inspired to pour himself into his work to develop a new life-saving medicine; and Tom transcends physical existence on the astral plane (or something like that). These are hopeful conclusions, though they’re contained within a film that is more interested in their superficial and formal relationships than their emotional or existential consequence.