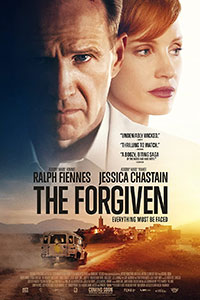 John Michael McDonagh’s The Forgiven is about “useless people.” They have a lot of money, yet they’re bored. So they travel to exotic destinations to mock local customs and assemble with other people who look like them—white—for extravagant parties. The festivities could last for days, but somehow, they’d still be discontented. David and Jo Henninger are such people. Played by Ralph Fiennes and Jessica Chastain, both excellent, the Henningers arrive in Morocco by boat in the film’s first scene. David observes with an air of dispassion, “l’Afrique.” Perpetually unimpressed, David is a “functioning” alcoholic who justifies driving drunk because Moroccan roads appear empty, and Jo isn’t the type to stop him. Just before arriving at the party in the black of night, after several hours of driving, David strikes a boy selling fossils on the roadside. The death is mainly an inconvenience for the ultra-rich and privileged partiers, all of whom can buy themselves out of any trouble. So why, when the boy’s father arrives on the scene the next day and demands that David return to their village, does he go along? Although The Forgiven trains its sights on white privilege in another brutalist and meditative feature from McDonagh, the film weighs whether one can make amends by simply recognizing their downfalls or whether one must endure an eye-for-an-eye atonement for true absolution.