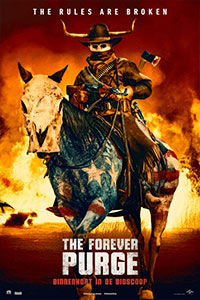 After four entries in Blumhouse’s Purge franchise since 2013 and the radical division of American culture since 2016, The Forever Purge seems less like a violent satire than a slightly exaggerated version of reality. Series creator James DeMonaco, screenwriter of all, director of the first three, not only anticipated America’s increasingly violent culture war but saw aspects of his movies become disturbingly germane. The latest entry unfolds along the Texas-Mexico border during the annual Purge—a 12-hour window in which murder and violence become legal in hopes of excising unhealthy feelings and achieving a more peaceful society. But as each movie has shown, the fictional Purge is a sociopolitical device created by white elitists, dubbed the New Founding Fathers of America (NFFA), to cleanse the land of so-called undesirables (e.g., the poor and people of color). It’s about as disturbing as the violence against non-white ethnicities, camps that intern migrant families under horrific conditions, and the widespread growth of fascism in the U.S. today.

When The Purge opened in 2013, it seemed somewhat unrealistic that our culture would take such a sharp turn into extremism; however, my screening of the original showed that audiences didn’t get the message. Instead, they cheered, laughed, and shouted racial epithets at the screen, viewing the movie as nothing more than garden variety escapism. Even though watching the original disturbed me as it was meant to, it was evident from my screening that DeMonaco’s intention supplied more entertainment value than social critique to general audiences. I have since seen three of five Purge movies in the theater, and each time, the audience’s reaction shows me they’re missing the point. When viewers clap and shout “Fuck yeah!” at the screen, and afterward, declare the movie “badass,” it’s evident the message is lost on viewers incapable of seeing or unwilling to confront its disturbing implications. That’s always been my issue with the Purge franchise. We should be horrified by what we’re seeing, but instead, the movies supply excitement and thrills for many.

The latest is no different, though its message proves particularly relevant. The story follows Juan and Adela (Tenoch Huerta, Ana de la Reguera), an illegal immigrant couple who escape the drug cartels in Mexico in a tunnel to America. A few months later, Adela works in a meat processing plant, and Juan serves as a horse whisperer on a ranch owned by a wealthy Texan, Caleb Tucker (Will Patton). As Caleb’s family prepares for the annual Purge by locking themselves behind metal shutters and reinforced doors, migrant workers hole up in a warehouse protected by community leaders. But this year’s Purge is unlike any before. An underground movement called “Ever After Purge” (Why not “The Forever Purge,” like the title?) has organized online, as fascistic domestic terrorists often do, and resolved to carry out “Purge Purification” well after the 12-hour window closes. Juan and Adela join forces with the Tucker family, among them Caleb’s son Dylan (Josh Lucas), plus Dylan’s pregnant wife (Cassidy Freeman) and sister (Leven Rambin), to survive what has become a 24-7 nightmare.

Although the previous movies explored how the Purge was used by white powers to “cleanse” America of lower classes and people of color, The Forever Purge asks: What if the 12-hour period didn’t end? The movie shows the American government using the military to combat Purgers, but it’s too little, too late. The country is overrun by domestic terrorists, prompting Canada and Mexico to open their borders to Americans who want to escape. Our survivors, ironically enough, head toward the Mexican border. Meanwhile, DeMonaco’s screen story cannot help but evoke the Capitol Riots from January 6, in that a mob of organized crackpots don absurd-looking outfits and carry out a plan that no one takes seriously until it’s escalated to disturbing extremes. The movie presents something like a nationwide parallel to the Capitol Riots, except it was already well into production when the riots occurred. DeMonaco’s series has always had unsettling foresight about just how low Americans can sink.

Director Everardo Gout handles the action with the kinetic, entertaining violence the Purge movies usually employ. That’s part of the problem. François Truffaut once argued that no filmmaker could make an anti-war film because cinema cannot help but soften and romanticize war. His point was that filmmakers would unintentionally glorify violence and make war look exciting, thus robbing the film of its intended critique of wartime horrors. Although exceptions to Truffaut’s claim exist, his point remains mostly true. The Purge movies demonstrate how you can’t make an actionized critique of America’s increasingly violent and intolerant culture without some segment of the audience delighting in the violence and cheering on the bloodshed. The movie proves far too riveting for its critique not to get lost in the action. And yet, DeMonaco should be smart enough to see this problem. After all, if he can see a cruel irony in white Americans who claim “America is for Americans” and then attempt to purge a Native American leader (Zahn McClarnon), then the writer should be able to see the hole this series has dug for itself.

The Forever Purge underscores how America has started to look like a dystopia. The events in the movie might seem unrealistic until you consider that Texas recently allowed its citizens to carry guns without a permit—a fact that, when combined with their “Stand Your Ground” law, push for a border wall, and the recent bill that would not require public school teachers to teach that the KKK is “morally wrong,” paints a disturbing portrait of an over-armed and bigoted culture. Fortunately, the movie doesn’t generalize all Texans into an anonymous throng and sympathetically portrays several members of the Tucker family. But by the end of the movie, which suggests it might be preferable to live in Canada or Mexico, its cynicism cannot be ignored. The Forever Purge is at its worst when it tries to entertain us and at its best when it asks us questions such as, What does it mean to be a “proud American” these days? Unfortunately, it doesn’t ask enough questions.