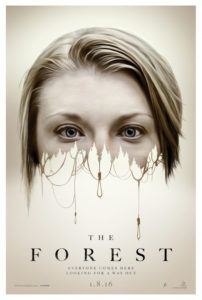 Going into a horror movie like The Forest, one automatically lowers one’s expectations. After all, it’s an early January release, a time that’s historically a dumping ground for brainless fodder soon to be forgotten. Regrettably, The Forest meets standard January release expectations. Viewers will leave it with a shrug. Rated PG-13 and devoid of suspense, the movie relies on a series of generic jump-scares to jolt the audience. Fortunately, the movie stars British actor Natalie Dormer, best know for roles on The Tudors and Game of Thrones, as well as rebel director Cressida from The Hunger Games: Mockingjay Part 1 and Mockingjay Part 2. She’s a promising lead in dual roles as twin sisters, but she’s wasted on a dull script and hokey delivery.

At least the concept is interesting. Japan’s Aokigahara forest (a.k.a. The Suicide Forest) at the base of Mt. Fuji carries a disturbing legend in real-life. Locals have been known to enter and commit suicide, or get themselves lost and never return from the lush woodlands. It’s a haunting idea ripe for filmic exploitation and mishandling. Indeed, Gus Van Sant’s The Sea of Trees, which debuted during 2015’s Cannes Film Festival to unfavorable reviews and has yet to secure U.S. distribution, explored the Aokigahara forest with stars Matthew McConaughey, Naomi Watts, and Ken Watanabe. Both that film and The Forest exploit the myth of these woods, although this yarn was largely inspired by J-horror and all its various clichés.

Dormer stars as American identical twin sisters who are annoyingly distinguishable. Sara is blonde, responsible, and carries a mild parental temperament; Jess is goth, her nose pierced, and more of a risk taker. When Jess goes missing in Aokigahara forest while teaching abroad, Sara uses her twin sense powers to feel that something is very wrong. She heads to Japan to find Jess, learns of the Aokigahara forest, and teams up with a friendly travel reporter Aiden (Taylor Kinney) and a forest guide Michi (Yukiyoshi Ozawa) to wander the woods and find her. Early on, Michi warns Sara that the forest is haunted by yurei, ghosts who torment those who are sad or weak. The yurei will make her see and do things she normally wouldn’t, so Michi cautions that Sara just needs to remember it’s all in her head. Do you think she takes that advice? Spoiler: No, she doesn’t.

From start to finish, you can look forward to all the formulaic scenes you might imagine would come from a Hollywood J-horror mash-up. Expect giggling Japanese schoolgirls turning into gray-faced ghosts. Expect strange sounds to draw people out from the safety of the forest trail or from tents at night. Expect hallucinatory spirits to leap out from the dark. Expect someone to be revealed as dead in a twisty twist. And, like most horror movies nowadays, expect a final shot of a badly animated CGI ghostface leaping at the screen for one last prod at the audience. Director Jason Zada and his trio of scripters (Ben Ketai, Sarah Cornwell, and Nick Antosca) haven’t put much effort into drawing outside of the sketchy blueprint for such horror fare, so it all seems very familiar.

Normally, familiarity wouldn’t be a problem if it were matched with equal measures of formal innovation or interesting characters. But The Forest not only doesn’t have a novel filmic approach, the story overlooks the cultural significance of Aokigahara for the Japanese by centering the events around an American. When upwards of 2,500 Japanese people commit “honorable suicide” in Aokigahara each year, the movie’s whitewashing of the story seems unnecessarily exceptionalist. Instead of turning the forest into a place where Japanese people find some kind of sad and disturbing comfort on a mass scale, the filmmakers have chosen to turn the place into a haunted house. Not only is The Forest a bad movie, it’s also a culturally offensive one.