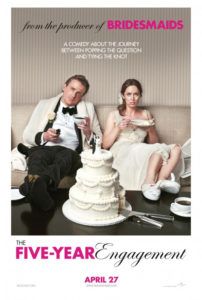 Hollywood-variety romantic comedies, along with horror movies, have all but run out of new ideas or original ways to present the old ones. Four or five new samples come out each year, and after seeing how thoroughly they rely on their tired formulas to get by, you begin to dread enduring yet another mechanical film with Channing Tatum or another Nicholas Sparks adaptation. This year, with The Cabin in the Woods, the horror genre gave us an imperfect but decidedly fresh and interesting example of how conventions can be reformatted in novel ways. Just as that film had its problems, so does The Five-Year Engagement, a Judd Apatow-produced romantic comedy that’s overlong and meanders in the middle, but it’s also very funny and gives some genuine human dimension to a familiar genre blueprint.

Jason Segel co-wrote the script with director Nicholas Stoller, the two having previously collaborated on The Muppets and also the best romantic comedy to come out of Apatow’s factory, Forgetting Sarah Marshall. Segel stars as San Francisco sous chef Tom Solomon, who proposes to his girlfriend of a year, Violet Barnes, played by a wonderfully comic Emily Blunt. She accepts, and during their wedding planning stages, she’s offered a doctoral studies position in social psychology at the University of Michigan in Ann Arbor. The wedding gets put on hold for a proposed two years, and Tom turns down a head chef position at a new eatery to allow Violet to pursue her dreams in academia, in the meantime taking a job as a sandwich maker at a modest deli. Meanwhile, Violet’s sister Suzie (Alison Brie) shacks up with Tom’s dirty-mouthed best friend Alex (Chris Pratt); they’re married and with child in a matter of screen minutes.

The time Tom and Violet spend in Michigan is where Segel and Stoller’s script begins to drag. Tom becomes a deer hunter, grows facial hair resembling that of a fur trapper, and hangs around with new weirdo friends—an awkward pickle expert (Brian Posehn) and a sweater-knitting “faculty husband” (Chris Parnell). He’s dreadfully unhappy and unfulfilled, but he resists telling Violet and plays the martyr. Violet interacts with her eccentric faculty group headed by charismatic Professor Winton Childs (Rhys Ifans), conducting human experiments involving a person’s willingness to eat a day-old donut and how that relates to their mental state. Tensions and resentments mount to a series of plot contrivances that send Tom and Violet into a breakup, only to be reunited again in true rom-com form. These turns may be familiar and veer off for far too long, but they come together in ultimately satisfying ways.

Fortunately, Segel and Blunt are terrifically matched and both are likable beyond measure. Both actors are capable of handling broad comedy and tender moments, and then intermingling them in ways the audience doesn’t expect. A sex scene where Tom attempts to fake an orgasm explodes into an argument and then returns for a laugh at the last moment. During another scene in the bedroom, Tom finally admits he isn’t happy in Michigan; the conversation becomes mean and cruel, and Tom says he wants to be alone. When Violet gets up to leave, he tells her to stay, that he wants to be alone, but with her in the room. Such scenes ring out with truth and heartrending emotionality, yet they also manage to make us laugh out loud. This has become a signature of the Apatow brand, and it’s in full effect here.

But, clocking in at just over two hours, it’s a very long engagement indeed. Forgetting Sarah Marshall and The 40-Year-Old Virgin were both around two hours too, but they didn’t feel as long as this film. Too much time is spent dwelling on how Tom and Violet grow distant in Michigan that even the audience questions their relationship, and during this time, the filmmakers risk losing certain moviegoers who will simply want the couple to either accept or deny their love for one another. But Segel and Blunt build characters that are convincingly true and experience relatable feelings, as opposed to the usual brand of rom-com characters we’ve grown accustomed to in this genre. The Five-Year Engagement feels like a step down from Segel and Stoller’s previous films together, but there’s enough sentimentality and comedic charm here to grant a solid recommendation for anyone weary of how tired and oversaturated the rom-com has become.