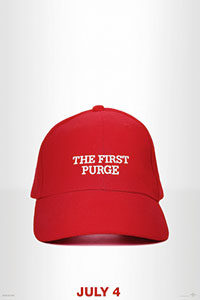 Blumhouse’s Purge series has grown into one of the low-budget studio’s most profitable franchises, and perhaps its most relevant. The first entry, released in 2013, featured a white middle-class family terrorized by a band of masked psychos on America’s “Annual Purge” night. However, as the movies progressed in The Purge: Anarchy (2014) and The Purge: Election Year (2016), series creator James DeMonaco used his concept to reflect a growing trend in the United States, where police and politicians have aimed at African American and Latino groups. His characters became people of color targeted by privileged white authorities determined to treat the lower classes like cattle. Purge night became a race war fueled by entrenched racism. Since the last film, released appropriately during the election year, DeMonaco’s ideas have become frighteningly, saddeningly germane. Unfortunately, the potential for insightful social and political commentary was habitually lost on the franchise’s exploitative roots, not to mention a fanatical audience whose thirst for blood overcomes any real thought about the implications of the setup.

The First Purge functions as a prequel, exposing the Purge for what the earlier movies only implied: it’s a disturbing social and racial cleansing perpetrated by a distinctly white authority. For the uninitiated, the Purge unfolds over a 12-hour period during which citizens can engage in crime without legal repercussions. Launched by a right-wing political party known as the “New Founding Fathers of America” (or NFFA), backed by the National Rifle Association, the Purge’s logline claims it’s meant to promote societal healing. The thorny logic suggests that people have a lot of pent-up anger and, if it’s released on a single night, everyone will experience a mass catharsis—those who survive, anyway. But the Powers That Be use it as a political device to wipe out lower classes and serve ulterior agendas, if not engage in unbridled, sadistic behavior. Based on the movie poster meant to evoke Donald Trump’s red “make America great again” hat, the franchise makes no veiled allusions to whom it’s rallying against.

The fourth entry takes place on Staten Island, where the U.S. government plans the first “experiment” to determine whether the Purge should be employed on a national scale. Participants receive $5,000 for remaining on the island, plus a bonus if they engage in the evening’s bloody festivities. Government employees interview locals like the crazed killer Skeletor (Rotimi Paul, over-the-top)—who cornily announces, “I need to purge!”—and then distribute glowing contact lenses to those who sign up, allowing the experimenters to monitor live video of the evening. The video feeds into a safe command center where the brains of the operation, Dr. Updale (Marisa Tomei), watches, along with a corrupt NFFA chief of staff (Patch Darragh). And while Dr. Updale expects the experiment to produce a few acts of violence, she doesn’t anticipate the high degree of unrest that develops.

Most of the action orbits around a good-hearted neighborhood advocate, Nya (Lex Scott Davis), who attempts to watch out for people in her community, among them her misguided brother, Isaiah (Joivan Wade), an aspiring gang member hoping for revenge on Skeletor. Meanwhile, Nya’s ex, the intimidating drug kingpin Dmitri (Y’lan Noel), remains sealed in his safe house, protected by armed guards, though his competition uses the evening to launch an attack. Although the experiment begins with block parties and a few vicious stabbings perpetrated by Skeletor, it quickly descends into a nightmare. Masked freaks and killers appear everywhere. Worse, the NFFA has something even more sinister planned: they’ve hired mercenaries to enter the lower class areas and perform a ruthless, murderous genocide. During the last third, The First Purge turns into a horror movie shoot-em-up in a ramshackle apartment building. Dmitri serves as the resident gun-toting hero, and admittedly, he’s a badass fighting against a government-paid band of white supremacist killers, many dressed as KKK members. All of them are led by a Ronald Regan-looking creep in a vinyl Hitler costume, a loaded image to be sure.

If The First Purge does nothing else, it proves that the hypocrisy of the Purge movies hasn’t corrected itself over the years. Although their message contains distinct, condemning anger and disgust about the increasing hatred, intolerance, and violence in the U.S., the movies themselves portray carnage with a marked intensity designed to entertain. Director Gerard McMurray delivers capably rendered action with intentionally gritty (ugly) digital lensing by d.p. Anastas N. Michos. But the screenplay by DeMonaco puts its thrills ahead of its concept, which makes for an uncomfortable viewing experience—especially with a packed theater that laughs and cheers at moments that should make them groan. Placing its B-movie objectives above its political motivations, The First Purge misses an opportunity to be about something more. Rather than provide mindless moviegoing thrills, a concept so inspired by the present state of the union should be terrifying viewers with its pertinency.