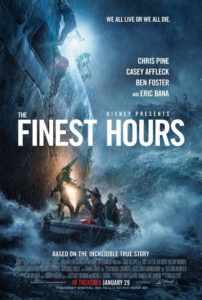 Disney’s The Finest Hours recounts a real-life 1952 rescue mission off the coast of Massachusetts, where a foursome of Coast Guarders journeyed into raging winter waters to rescue the survivors of an oil tanker torn in half by violent waves. Based on the 2010 book The Finest Hours: The True Story of the U.S. Coast Guard’s Most Daring Sea Rescue by Michael J. Tougias and Casey Sherman, the film proceeds in a predictable structure. A good-looking cast of leading men (headlined by Chris Pine and Casey Affleck) do brave things while their women wait at home, worried that they’ll never see their husbands again. Director Craig Gillespie (Lars and the Real Girl, the remake Fight Night) delivers a workmanlike production with some diverting special FX, but the forgettable result doesn’t heat those frigid waters enough to make the experience memorable.

Writers Scott Silver, Paul Tamsay, and Eric Johnson spend the first fifteen minutes establishing a romance between the quiet young Coast Guard sailor Bernie Webber (Chris Pine) and Miriam (Holliday Grainger), his strong-willed girlfriend. Bernie is timid and by-the-book, and Pine is miscast in the role. Known for cocky braggadocios like James T. Kirk, Pine, and his commandingly-sized head, can’t quite pull off humble and respectable. Nevertheless, Miriam takes control and asks him to marry her, which he agrees to, but only if, in an outdated formality, his commanding officer (Eric Bana, underutilized) gives his consent. But before Bernie can ask permission, he’s ordered out to sea in a small, 36-foot boat along with three fellow sailors (Ben Foster, Kyle Gallner, and John Magaro) to rescue the survivors of a wrecked oil-tanker. Having spent so much time establishing Bernie’s romance, we’re less concerned about the rescue mission than Bernie getting back for Miriam.

The film crosscuts between Bernie’s perilous drive over towering waves in the storm and the oil-tanker crew, now separated from their captain’s sunken half of the ship. Casey Affleck plays the boat’s chief engineer, Ray Sybert, who takes control of the situation. Affleck and Pine’s characters have much in common: they’re both quiet loners among rugged men; they’re usually both the most intelligent person in the room (or on the boat); and they’re both disliked by their fellow crewmates. Affleck is very effective as Ray, who must convince a staff of quarreling clichés to organize and save their swiftly sinking half of the tanker. Accompanied by a craggy Scotsman (Graham McTavish) and a large cook named Tiny (Abraham Benrubi), Ray must combat his skeptic, headed by the resident crab (Michael Raymond James), who of course comes around. Both groups, Bernie’s and Ray’s, struggle to survive the computer-generated waves until the daring sea rescue sequence occurs, and underwhelms.

Similar to The Perfect Storm or more recently In the Heart of the Sea, master shots of CGI waves crashing against animated boats become tiresome and dull, while closer scenes with actual water splashing on the faces of actors looks like soundstage work with someone standing offscreen holding a bucket. The digital noise layered over many of the scenes spoils whatever good will the early romantic scenes established with their quiet intimacy. Cinematic realism isn’t so much Gillespie’s goal here; rather, he seeks to evoke a sense of spectacle. After all, The Finest Hours is available in 3D as well. And let’s not forget the heroes. But if there’s anything that’s grown tiresome in today’s film environment, it’s being told that someone’s heroic (see American Sniper or 13 Hours). While it was certainly an honorable and risky feat these men accomplished, their filmic tip-of-the-hat deserved better.

Scenes inside the broken tanker where Affleck maintains calm and gravitas against all possible outcomes remain stirring, and editor Tatiana S. Riegel assembles at least two jarring montages of everything going wrong at once. Metal tears, bolts pop, and water comes rushing in. Elsewhere, a digitally composed sequence meant to look like an extended shot follows men on-deck relaying orders down to the engine room via a game of telephone; every time there’s a cut, the viewer will notice a brief digital blur that strings two unconnected shots together. That’s a fine metaphor for The Finest Hours, a series of passages connected by an artificial tissue composed of elements from Jaws (singing in the calm before the storm) to Titanic (two lovers separated by a sinking ship). It’s all very familiar and unremarkable filmmaking for an otherwise remarkable story.