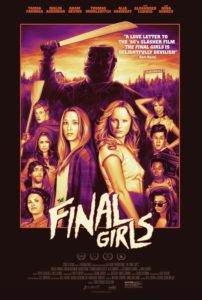 Meta-horror titles have outnumbered straight horror since Wes Craven delivered Scream back in 1996. The movement continues to grow with titles like The Cabin in the Woods and Burying the Ex, or television shows like American Horror Story and Scream Queens. Such material winks at the audience and openly acknowledges established tropes, while using those very same tropes to make us laugh and gasp. Each entry in meta-horror is often more concerned about making jokes and paying homage to cult favorites than being its own beast or frightening the audience. After all, it’s easier to poke fun at time-honored clichés than create something wholly new and terrifying. And so, depending on how specific the references are in such a movie, meta-horror is reduced to a genre enthusiast’s subgenre with limited audience potential.

The Final Girls is certainly too abstract for general audiences, but horror fans will get a kick out of its post-modern perspective. Screenwriters M.A. Fortin and Joshua John Miller enter the realm of Last Action Hero (1993), where their moviegoer characters are thrust into one of their favorite films and forced to survive. Imagine it, you’re dropped in the midst of Friday the 13th or A Nightmare on Elm Street and cannot escape. The interesting concept comes complete with strange, real-world materializations of movie tricks: A dissolve to a black & white flashback features clear goop that falls from the sky to carry out the transition; you can hear the movie’s musical score all around you; you can see titles appear in three-dimensional form. But it turns out the dangers aren’t movie magic, they’re very real and deadly. Director Todd Strauss-Schulson, whose experience in TV and A Very Harold & Kumar 3D Christmas doesn’t bode well, offers a fun juxtaposition of scares and humor.

Three years after a car accident where her struggling-actress mother Amanda (Malin Akerman) died, teenager Max (Taissa Farmiga) receives an invite to appear at a film fest honoring her mother’s memory. In her youth, Amanda starred in a beloved ’80s slasher flick called “Camp Bloodbath”, clearly modeled after Friday the 13th, complete with a tormented camper who becomes a masked killer. Max attends alongside her best friend Gertie (Alia Shawkat), whose fanboy brother Duncan (Thomas Middleditch) has programmed the evening. Once there, Max joins Chris (Alexander Ludwig), a classmate with whom she shares a mutual crush, but his snobby ex-girlfriend Vicki (Nina Dobrev) shows up too. At some point during the screening of “Camp Bloodbath”, a fire breaks out and, for reasons unexplained, Max and her four friends somehow end up inside the very film they were watching, which is set to repeat itself every 92 minutes (the runtime of “Camp Bloodbath”).

A surprising emotional core drives The Final Girls, as Max is now confronted with a younger version of her mother in character as one of the camp counselors. Although her mother’s character is supposed to die by the hands of the resident slasher Billy (Dan Norris) when she has sex, Max tries to talk the character out of it, desperate and teary-eyed to save her. Likewise, the friendships between Max, Gertie, and Vicki have a tangible backstory. Meanwhile, the movie-within-a-movie’s other counselors are less described and serve as funny, if typical asides to increase the body count: the jock (Adam DeVine), the slut (Angela Trimbur), the token black guy (Tory N. Thompson), and the scripted final girl (Chloe Bridges). Unfortunately, things don’t go as their supposed to in “Camp Bloodbath”, as the real-world interlopers change the story by accident. Things get particularly inventive when our heroes decide to tell the cast that they’re in a movie.

Filled with intentionally over-the-top violence, The Final Girls is nevertheless more a comedy than a horror movie, and retains a PG-13 rating to prove it. The filmmakers resolve to play with genre tropes as opposed to delivering genuine scares, which limits the audience to those well versed in cult classic horror. Still, one or two surprises, including our engagement in Max’s character (thanks in large part to Farmiga’s excellent performance as a vulnerable teen), keep us involved. Even though, in the end, The Final Girls doesn’t play by its own rules—it spoofs The Matrix‘s bullet-time FX instead of ’80s-brand effects limitations, and never offers a real explanation as to how our heroes ended up in “Camp Bloodbath” in the first place—the proceedings are enjoyable enough to dismiss the incongruities for amusement’s sake.