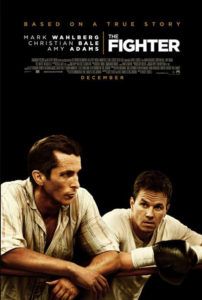 Time and again, boxing films rely on the inner struggle of the protagonist to manifest and ultimately work itself out in the ring. Be it underdogs or tragically flawed heroes, the dramatic metaphor that boxers punch away their personal demons represents an archetype that makes boxing the greatest of all sports in cinema. But even this metaphor has become a tired and predictable cliché after legendary films like Gentleman Jim, Raging Bull, and their followers. And yet, The Fighter differentiates itself from the formula by settling less on a single boxer, and more on the family and friends that surround him. Indeed, after seeing the film, which is based on a true story, you might question to whom the title refers.

With bookend pseudo-documentary interviews, the film opens on an HBO crew shooting footage of ex-fighter Dicky Eklund, played by a waif-thin Christian Bale, who hasn’t looked this skeletal since The Machinist. They follow Dicky through his blue-collar hometown of Lowell, Massachusetts, where he’s something of a hero for knocking down Sugar Ray Leonard more than a decade ago. Now Dicky promises a comeback as “the pride of Lowell”. In the meantime, Dicky trains his younger half-brother, Micky Ward (Mark Wahlberg), a road paver and part-time boxer whose career is held back by his family. Micky’s hard-edged mother Alice (Mellisa Leo) and his umpteen know-it-all sisters guide him into mismatched fights, shooting nasty glares when he questions their business savvy.

Only when the softspoken Micky meets his headstrong girlfriend, Charlene (Amy Adams), does he begin to admit that his family is leading him astray. We see the lower depths where Dicky spends his time smoking crack with equal parts need and embarrassment, and Alice’s denial that anything is wrong. Yet, Micky has too much heart to merely write his family off, despite them dragging him down with every bad career decision. Once he finds a new manager and trainer, Micky knows that Dicky’s instincts as a former boxer remain intact, no matter how rattled his brain may be from years of drug use. As his brother overcomes his addiction, Micky finds a way to merge Dicky’s skill with his own physical talent, and the victory becomes one for a rare, dynamic family.

There’s a piece of footage that plays over the end credits, showing the real-life Micky Ward with his half-brother, just as fried as one would imagine a longtime crack user to be. Whereas the footage appears to be in honor and thanks of the actual principals involved, one can’t help but suspect that the filmmakers included it just to show how brilliantly Bale has captured his character. Teeming with unfocused energy and jabbering hilarity, Bale disappears into his role and demonstrates that he’s more than just the grave performer behind Christopher Nolan’s Batman franchise. Hustling and twitching and making us laugh, Bale delivers a complex character whose failings run deep, yet the love for his brother never wavers. And it would be something of a crime if Bale didn’t win an Oscar for this performance.

To be sure, much of the supporting cast deserves awards consideration for their roles, especially Leo, who embodies a no-nonsense mother that shouts when she should be listening. Adams makes an effective underachieving bartender, though she’s more accustomed to playing princesses; regardless of all those expressive roles in Enchanted and Miss Pettigrew Lives for a Day, she’s capable of real subtlety here. But one must not forget Wahlberg, whose quiet intensity pays off in every scene. Wahlberg does his best acting in roles that require simplicity and anger—like those in The Departed and Three Kings. Here Wahlberg shows surprising emotional depth that comes as a surprise given his sometimes wooden acting. If there was an Oscar for ensemble cast, The Fighter should win it.

For the first time, David O. Russell directs a screenplay that’s not his own, and the result is just as thoughtful and visually compelling as his original work. The script had circulated Hollywood for some time as Wahlberg’s passion project. Though at one point Darren Aronofsky (who serves as executive producer) was set to direct, he dropped out for other projects (notably Black Swan), and Wahlberg turned to Russell, who had directed him previously in Three Kings and I Heart Huckabees. Russell brings a sense of order to those outbursts filled with overlapping dialogue between Micky’s family members, and also shows the humor behind Dicky’s frenetic energy. Another director may have mishandled Dicky’s scenes, making him unsympathetic and dismal, but Russell and Bale present a three-dimensional character who steals the film.

Russell takes a palpable cue from the films of Martin Scorsese, not only with the boxing scenes, but in the momentum of the film. The soundtrack keeps the story moving along, and cinematographer Hoyte Van Hoytema (Let the Right One In) finds a gritty, grainy style that gives the experience a realistic feel. Accordingly, the matches themselves don’t feel like the Hollywood rock-em-sock-em bouts from the Rocky movies, but instead painful-to-watch fights filled with strategy we look for and contacts that we feel in our kidneys, with some shot wonderfully reminiscent of those in Raging Bull. This is a picture that rouses you, makes you want to get up and cheer, and yet deeply confronts you and affects you. Russell displays incredible versatility with The Fighter, leaving his signatures on a film that didn’t start out as his project, but turned into one of the best films of 2010.