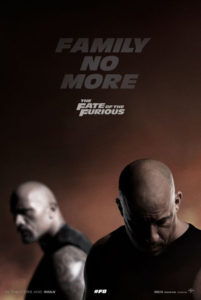 Themes are best left under a film’s surface, in the subtext or revealed by subtle visual associations or narrative events. The Fate of the Furious has no idea what subtext or subtlety mean. It’s approach to theme has all the understatement of the climactic action sequence late in the film: For reasons not worth explaining, our heroes drive a tank and several muscle cars on the icy surface of a Russian lake. All at once, a nuclear submarine bursts through the frozen surface and, crashing along through what must be several-feet-thick ice, chases the vehicles at top speeds. Not since the screenwriters were playing with their Hot Wheels has such an outlandish feat been imagined. And with this degree of delicacy, the eighth Fast/Furious movie applies its tired theme, that its super-criminal-turned-superhero car thieves are a tight-knit family. The word “family” must be said dozens of times in the film, as if the mind-numbed viewers weren’t already aware of the theme. If a character questions whether the next mission is worth the risk, the answer is family. If a character has a fundamental problem with a member of the family, the answer is family. And when your second-worst enemy becomes an ally to defeat your first-worst enemy, they too become family.

Every entry in the never-ending Fast/Furious series is about family on the most superficial level. The theme is emphasized almost as much as its unfortunate use of those random, bikini-clad women the camera ogles at the now-infrequent street car races (the series used to be about street racing… and family). The family theme impels these mostly meatheaded characters, who are otherwise defined by the heavy flow of testosterone and raw machismo leaking from their pores, which combine to act like a natural baby oil that brings a glisten to their vascular musculatures. Family: it’s a theme clung to by hordes of fans, who aggrandize the soap opera relationships between these gearheads because they drive fast and make things go boom. And while many viewers and critics alike suggest the Fast/Furious films have somehow improved over the years—as opposed to just becoming louder and dumber and faster and furiouser—the franchise has maintained the same dull dramatics about family since the beginning.

The problem is, just saying “family” a lot in the script doesn’t mean anything, especially when the story doesn’t back it up. After the pre-credits scene set in Cuba (an obligatory street race sequence littered with random, objectified women), Vin Diesel’s hulking hero Dom finds himself blackmailed into helping supervillain-hacker Cypher (Charlize Theron) steal an EMP and some nuclear weapons. Cypher plans to take over the world, I guess, for reasons she vaguely describes as “accountability”. Meanwhile, Letty (Michelle Rodriguez) knows that Dom wouldn’t turn his back on their god-fearing family—because, you know, family—and so the crew (Dwayne Johnson, Tyrese Gibson, Chris Bridges, etc.) tries to stop Cypher and recover Dom. Backing them from the shadows is Kurt Russell’s charismatic Mr. Nobody, an endless well of resources whose MIB understudy (Scott Eastwood, son of Clint) replaces the late Paul Walker as the resident boring white guy.

Also joining the family is Jason Statham’s Deckard, the villain of Furious 7 who, if you recall, killed a few members of Dom’s family. But through the course of The Fate of the Furious, Deckard’s crimes are inexplicably forgotten and he soon becomes part of the family. Likewise, Deckard’s own family, which consists of his brother Owen (Luke Evans) and a cameo by Hellen Mirren as his mum, also earn entry into Dom’s family. So, as it turns out, Dom’s family is the kind of family that doesn’t mind if a new member of the family killed an old member of the family, as long as they do something to prove they’re worthy of entry into the family. After all, it’s not as though The Fate of the Furious places any value whatsoever on human life. As our heroes drive through New York City streets, colliding with and destroying countless vehicles, the death toll in collateral damage must be in the hundreds. But rather than try to protect the innocent, the crew resolves to fist-bump each other and say “I got this” as families die all around them. Not since Man of Steel have so many people died without a word said about it.

During the last half, The Fate of the Furious digresses into pure superhero mode. Rather than just saving Dom and reestablishing their family, the group must stop Cypher from starting World War III. Indeed, the Fast/Furious series has fallen prey to the unfortunate trend in comic book blockbusters that require the heroes to save the world. It’s not enough that they save a family member; the entire world must hang in the balance. Accordingly, the characters behave like superheroes. Though they were once thieves and street racers, now they somehow outperform any number of highly trained members of the CIA. They infiltrate top-secret installations with high-tech weaponry, somehow defeating their specialized opposition with all the bluntness of a hammer. Their computer nerds can hack into any government system with a few simple keystrokes, they dodge countless bullets, they survive crippling car wrecks, and they even use jetpacks (yes, jetpacks). The casual stupidity and over-the-top manner of the film are more appropriate for Diesel’s xXx series, a bloated rip-off of James Bond.

Director F. Gary Gray, who teamed with Theron to remake The Italian Job (which seems like an art film compared to this), operates in the same style as his series predecessors, James Wan and Justin Lin. Which is to say, Gray’s approach is loud and grating, his action has been chopped to bits in the editing room, and his production relies too heavily on CGI. It isn’t all bad, I suppose. Apart from the overt themes of family and blunt force silliness of the action, The Fate of the Furious offers a few moments of humor. Watching Johnson’s Hobbs coach a girl’s soccer team earns a chuckle. And Statham, ever deadpan, has a funny sequence where he rescues a baby and shows his lighthearted side (it almost makes us forget that he killed Han and Gisele in Fast & Furious 6… almost). But the film is ultimately a bloated mess-of-a-blockbuster, meant to divert audiences in the shallowest of ways. Nevertheless, the franchise remains a juggernaut, an incoherent and relentless force that people unabashedly love—pun-laden titles and all—and which might signal our culture’s continued lapse into an Idiocracy. As for the future of the Fast/Furious series, two more titles are planned by Universal Studios. Since Dom’s family has already saved the world, expect them to save the galaxy in Part 9, and in Part 10, the universe!