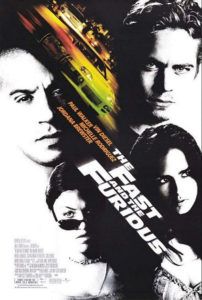 Gearheads and racecar aficionados maintain a fondness for speed and sleek-looking automobiles. It doesn’t matter that those things generally come brains-not-included, since there’s little intellectual appeal in the raw pleasure of cars. They’re about emotions—the thrills and escape and weightlessness they provide. They consume attention and money, as they’re built upon and improved, providing a culture of testosterone-injected nerds with their own brand of fanaticism, which in turn has spurned a subgenre of movies. The same can be said for Trekkies and comic book devotees. The Fast and the Furious, a mind-numbingly generic flick about criminal street racers, represents this culture of enthusiasts as nothing short of bad-to-the-bone men obsessing over their sports cars if only to size them up against the competition. Almost as homoerotic as a locker room measure-off, the vague discussions about “turbo” and “nitrus” propel the technical jargon, setting up a world where Autotrader subscription holders will feel right at home.

Essentially a rip-off of Point Break, the plot involves an undercover cop, Brian O’Conner (Paul Walker, using his omnipresent surfer-dude voice). O’Conner attempts to find the criminals responsible for a rash of semi-truck robberies by penetrating Los Angeles’ underground street racing scene. His target is Dominic Toretto (Vin Diesel), the leader of a too-cool-for-school racing gang. Toretto’s band of glorified thieves drives about in Honda Civics, synchronizing their cars in shapes like arrows and such, causing us to wonder when they practice their choreography.

Racing scenes enhanced by computerized special effects make the ensuing film, wrought with numerous uninvolving chases and head-to-head competitions, implausible and silly. Thinking of the realism and excitement of pictures like Grand Prix and Ronin makes one readily condemn a movie like The Fast and the Furious, which doesn’t bother trying for realism when the ease of CGI exists. However, Hollywood has seen too many stunt driver accidents, so bravado driving sequences are more often than not a thing of the past.

Forced to watch the dumb expression on Walker’s face, we endure as the story unfolds. O’Conner falls for Toretto’s sister (Jordana Brewster) and questions his allegiance to the LAPD. Soon O’Conner and Toretto are best of pals, causing us to consider why crime bosses always illogically befriend the undercover cop in movies. There’s lots of talk about Race Wars, but the movie never follows through with an elaborate racing tournament. Instead, the drippy yarn about cops and crooks proceeds as planned, complete with its saw-it-coming-from-a-mile-away ending.

Written by more names than I care to list within this review, it’s the type of movie where the cops drink “iced decaf cappuccino” and the motorbrains guzzle down beer and the occasional Snapple. Trashy babes dripping with oil are around every corner, presenting their cleavage, or as much as the PG-13 rating will allow. And the colorful, decked-out foreign cars receive more mouth-watering gazes from car aficionados in the audience than the women, who seem like mere garnish to the vehicular main course.

With a mundane story and adrenaline rushes that peter-out before they begin, The Fast and the Furious best appeals to preteens and hardcore car junkies. Shot without a single exciting racing scene throughout, director Rob Cohen feeds his audience junk food from a recipe of high-speed cars, decorative women, and lame action. Cohen’s cast is populated by an endless list of brick walls, each more robotic in their acting than the last. And his approach to style is loud and raucous but hardly lives up to the title.