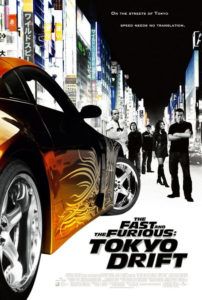 In the realm of heaping piles, The Fast and the Furious: Tokyo Drift has built quite a mound. Movies like this come along every so often, prompting questions about why anyone believed in them. The appropriate response is not to question why, but to look upon it with awe—and not holy awe wherein something majestic is beheld, but rather the sort causing simultaneous disgust, curiosity, and bewilderment. After we’ve observed long enough, it’s best just to wipe away the excess, flush it down, and pretend it never happened.

The third in a series of brainless movies about souped-up cars, loud music, and scantily clad women, this entry has nothing to do with the established storyline. Not that you’re quivering in the fetal position from Paul Walker withdrawal. But that Walker turned down an offer to reprise his role from the first two should flash your inner warning sign. When the lowest rung of Hollywood talent—and I use the term “talent” generously—passes on your script, chances are you need a rewrite. Or some lighter fluid and a match.

Instead of blockheaded oil-jockeys and undercover cops, the story follows troublemaking teenager Sean Boswell (Lucas Black) on a trip to Tokyo. There, Sean’s estranged father is supposed to make sure he doesn’t get into trouble racing cars. Inevitably, Sean does race cars, he does get into trouble, and so his rebelliousness is equated with coolness, with which gearheads can no doubt identify.

In the movie, an actor called Bow Wow plays a character named Twinkie. (There’s no punchline needed. That fact is funny enough by itself.) Twinkie befriends Sean and introduces him to all the people in Tokyo who can understand his thick southern drawl. Thankfully, some of those same folks share Sean’s passion for racing cars. He learns the art of drifting, which is not the talent of looking spacey and confused, a gift Sean has an incredible aptitude for. Drifting involves oversteering a car, causing a controlled swerve. Think hydroplaning without the hydro. Drift races take place on mountain roads and in parking garages, and the drift itself is almost always depicted in slow motion.

Sean finds himself involved with Yakuza gangsters, among them martial arts legend Sonny Chiba appearing as the crimelord Kamata. Our American hero falls in love with the one non-Japanese girl in the bunch (Nathalie Kelley). Some money is stolen, and there’s a question of honor. And when such conflicts arise, they’re solved on the racetrack. If only all of society worked this way, our legal system would be much more efficient, and the auto industry would be thriving.

Director Justin Lin (Annapolis) takes the title’s “fast and furious” too seriously, as racing scenes, the only reason people endure this franchise’s bad scripts and worse acting, are filmed unintelligibly fast and enhanced by generic computer effects. Little can be said for the cast since they’re F-List stars at best. But Lin offers plenty of the same auto-fetishism present in this sequel’s predecessors, observed when the camera pans back and forth between auto parts and butt shots on skimpily-dressed skanks. Why not just make a sequel to David Cronenberg’s Crash. The implications are just as subtle. Of course, there’s an engrained audience for trash like Tokyo Drift. And luckily for them, pesky ideas like plot and character don’t get in the way.