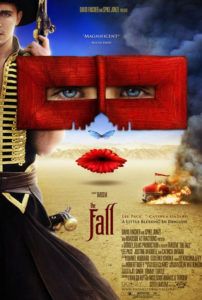 Feasting on his imagination, director Tarsem Singh Dhabdwar might be accused of visual gluttony for his efforts in The Fall. Richly composed of frame after wondrous frame of impossible imagery, his production is an exercise of imagination and narrative simplicity. Indeed, it’s a story you’ve heard before—aren’t they all?—but you’ve never seen it quite like this, never with the inconceivable beauty painted with Tarsem’s fine brushstrokes. Filmed primarily in India, we see things the eye cannot believe are real, except they are: A centuries-old observatory with labyrinthine staircases, a city painted blue, faces that emerge from the earth—they’re all shot from the expert eye of a devoted artist. Tarsem dropped his last name when directing The Cell in 2000, a film so powerful visually that one forgets Jennifer Lopez and Vince Vaughn were the stars. Now he’s dropped his middle name and receives credit as simply Tarsem, an apt abbreviation for a singular voice. To be sure, if M.C. Escher were making movies, he’d be making them like The Fall.

Set in Los Angeles around 1915, the film begins in a wayward hospital set next to blooming orange groves. Young, impetuous immigrant girl Alexandria (Catinca Untaru) finds the oranges perfect for throwing at the local chaplain. Curious about everything, she finds her way into a ward where silent film stuntman Roy (Lee Pace) languishes in bed, paralyzed after an on-set accident. Somewhat key to their bond, her father is dead, and Roy’s girlfriend left him after his misfortune. They’re both alone. The two quickly become friends, and he begins to tell her a story.

From his words and her imagination giving them life, Tarsem puts together an immaculate, straightforward escapist tale of bandits, a crooked governor, dreamlike architecture, and expansive scenery. It’s a rather uncomplicated storybook fable, even when Roy begins using it as blackmail, convincing young Alexandria to steal pills in exchange for another chapter. But its plot is always driven by its author and its adolescent listener’s wishes. The simplicity of it allows us to consider the visual realm of moviegoing, reflect on how rarely the medium surpasses the mind’s eye, and then immerse ourselves in the ocean of incomparable radiance presented within.

As I said before, the story is familiar. You might compare it to Pan’s Labyrinth or The Adventures of Baron Munchausen. And while Tarsem lacks the mythological consistency of Guillermo Del Toro or Terry Gilliam’s grotesquely enjoyable orgy of visual and narrative audacity, he creates his own temperate poetry in each deliberate image. Rarely does every shot of a film evoke the gape-mouthed awe and the sense of wonderment that flows through every moment of this film. Intentionally backed by the storytelling innocence of a child, Tarsem reminds audiences that sometimes all one needs is a pretty picture and a happy ending.

Shot in eighteen countries over the expanse of four years, Tarsem put millions of his own money from his years as a commercial and music video director into completing the project, and so it carries the mark of being a labor of love, and also utter self-indulgence. Sadly, his filmic trompe l’oeil was all but discarded at the box office, opening in limited release against a number of summer blockbusters. But maybe audiences will seek this one out on home video, preferably on Blu-ray, to absorb each stunning detail and richly observed color.

Tarsem boasts that few computer-generated special effects align The Fall. And yet, while screening the film, I scribbled the following in my notes: How can it be real? Either Tarsem realized his vision without computer assistance as the promotional material claims—which seems impossible given some of the things we see, though I’d like to believe such splendor exists in the world—or this is perhaps the most accomplished weaving of actual footage and digital animation yet put to film. Whatever the case may be, it doesn’t really matter; the result speaks for itself in a thousand flawless pictures, all enchanting the viewer beyond measure.