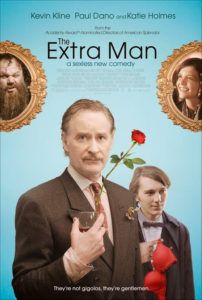 Though Kevin Kline’s performance as an escort to rich old Manhattan ladies isn’t the only reason to see The Extra Man, it’s the main one. Based on the novel by Jonathan Ames, the film balances sophisticated airs with a dose of offbeat humor for a strange but effective concoction. Kline is hilarious as a penniless self-proclaimed aristocrat who enjoys posh meals and nights at the opera by serving as a Rosen Knight—a knight who brings roses, or gigolo. Though his character doesn’t engage in sexual activities with his often elderly clients, he provides them with the company of a well-spoken gentleman.

Married filmmakers Shari Springer Berman and Robert Pulcini, whose The Nanny Diaries left much to be desired after American Splendor, achieve their eccentric manner rather well, always splitting the material between classical enunciation and the debaucheries of impoverished male escorts. Take Louis Ives (Paul Dano), a prep school literature professor whose unclear fascination with braziers and crossdressing gets him sacked from his job. Louis speaks and dresses like he was a character in The Great Gatsby, and even affords himself an inner narrator to lend his life the purpose of a fine novel. Yet when he looks in the mirror, he wants to see a woman but doesn’t know why. Hoping to find himself, he moves to Manhattan and answers an ad looking for a roommate.

Kline plays Henry Harrison in one of his best screen roles, a coulda-been playwright who allows Louis to sleep in his small apartment on a shabby mattress. Henry is a peculiar sort, who despite his occupation keeps his views on sex “to the right of the Pope.” He speaks with the articulation of an academic, but the character remains a mystery so that the audience might marvel over his quirks. To classical music Henry moves in nonsensical interpretive dances; he tells Louis “If you ever want to buy me something, buy me Christmas balls”; and among other things he teaches Louis how to urinate in public without being noticed, because a true aristocrat should pee wherever he likes. Though he teaches sometimes at Queens College, Henry has fleas and paints his feet black for lack of clean socks.

Louis’ own peculiarities come through when he’s feeling low; suddenly he gets the urge to dress up like a woman and be spanked, or visit a transvestite bar. He keeps this behavior a secret, especially at his new eco-friendly magazine job around his coworker crush, Mary (Katie Holmes), who couldn’t be less interested in him. John C. Reilly also appears as Henry’s grizzly-man neighbor, a hilariously falsetto-voiced mechanic with a bushy beard and dreams of sailing the Mediterranean. The film meanders about as Henry and Louis interact with aged billionaires, like Vivian (Marian Seldes), from whom Henry hopes to earn a winter’s stay in a vacant room at her Palm Beach home. Through it all, there’s a constant interplay of well-mannered companions behaving in depraved ways, a tonal dynamic that never loses its edge. The result can be a little uneven at times, but it’s constantly funny.

Dano’s performance might be overshadowed by Kline’s bravado comic portrayal, but that’s the nature of their characters. Henry remains a domineering curmudgeon while Louis is the quiet but intuitive type. Dano has perfected the art of quiet intensity, as evident in Little Miss Sunshine; and he’s also capable of great outbursts of emotion, as in There Will Be Blood. Those abilities perfectly capture Louis, who seems to emerge from his shell when Henry introduces him to the skill of being an “extra man” to lonely rich widows. He also lends the film its heart.

Still, watching Kline speak his character’s absurd views on life with his expert thespian inflection never grows old. He’s an actor that, despite his incredible and even Shakespearian talent, doesn’t mind acting like a buffoon, and if for nothing else, The Extra Man should be seen for this. Berman and Pulcini tend to wander about, so the audience might question what the point is. Of course, Louis asks himself the same thing throughout the film. The answer doesn’t satisfy, and so neither does the film, not entirely, but the performances and the oddball sense of humor will appeal to a particular kind of crowd.