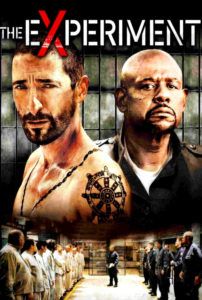 The Experiment is the latest casualty from Hollywood’s increasingly gutless approach to marketing. Independently financed, the film required only a distributor, but because the major studios shy away from taking risks these days, it failed to find a home until Sony acquired it for home video. Studios are more interested in sure things: remakes, sequels, prequels, name-brand recognition, and formulaic genres proven to be profitable. It’s all the more curious that no one jumped at this film, being based on the 2001’s Das Experiment by German filmmaker Oliver Hirschbiegel, which in turn was based on the novel Black Box by Mario Giordano. But the high-concept plot likely proved too much for Hollywood’s ever-lazy advertising gurus.

Said plot involves volunteers that answer an ad seeking subjects for experimentation. Trials will last two weeks and pay $14,000 after the period is over, but subjects are warned by the primary scientist (Fisher Stevens) that the experiment simulates the conditions of a penitentiary, and the civil rights of many volunteers will be taken away. Most of the subjects, all men, are jobless and desperate, so they agree. They’re driven by bus to a facility in the middle of endless corn fields and separated into two groups, guards and prisoners. The guards are given a list of five crucial rules, which they cruelly choose not to share with the prisoners: 1. Prisoners must have 3 meals a day, plates totally clean; 2. Prisoners get 30 min. of recreation per day; 3. Prisoners can only be in prisoner-designated areas; 4. Prisoners must only speak only when spoken to; 5. Prisoners are not allowed to touch the guards.

Self-styled leader of the prisoners, the unemployed activist Travis (Adrien Brody), believes in pacifism; whereas the straight-laced leader of the guards, Barris (Forest Whitaker), believes in god-fearing order. And when Barris’ sense of regulation quickly becomes too dogmatic for Travis, who simply asks for a little human understanding in an experiment that everyone knows isn’t real, he rebels. Barris and his team of guards are not allowed to directly harm the prisoners; if they do, the Red Light flashes and marks the premature end of the experiment, thus no payday. So the guards resolve to humiliate Travis and the other misbehavers. First punishments come by way of pushups. Then sprays with fire extinguishers. Soon they’re shaving Travis’ head, urinating on him, and giving him a swirly in a fecal-ridden toilet. Meanwhile, there’s a hackneyed subplot involving a diabetic graphic novelist (Ethan Cohn), the chubby nerd of the group that Travis defends because morality demands it. There’s also a creepy, sexually frustrated guard (Cam Gigandet) who sets his sights on an effeminate inmate for the obligatory prison movie rape sequence.

Brody’s year of science-fiction protagonist roles continues here after Splice and Predators; and The Experiment is just as mildly entertaining if moderately underwhelming as those films, despite the presence of two Oscar-winners in the cast. Brody feels forced as a sympathetic but overwrought activist just trying to earn enough dough to meet his girlfriend (Maggie Grace) in India. Whitaker, however, proves over-the-top as the guard who goes slowly mad after his first dose of erection-inducing power. It takes a shockingly short time for Whitaker’s Barris to unhinge, leaving the audience to pause and wonder why those who conducted the experiment didn’t see his proclivity for mental illness during the interview process. Or perhaps they did. But when Whitaker begins looking obsessively at his master, uttering “The Red Light is the only way that we can know”, it’s eye-rolling instead of terrifying.

Director Paul Scheuring enters familiar territory, being the creator of Fox’s Prison Break television series. Scheuring doesn’t add much visual ingenuity to the project, relying mostly on his actors and the script’s ideas to pull him through. We’re meant to ask, “At what point does the Red Light come back on and reality sink in? Do the subjects even know the real experiment?” They were told it’s a prison experiment, but there seems to be something more going on when the light doesn’t flash after several borderline incidents, and at least one of the experiment’s participants crosses the line completely. By the finale, Scheuring has asked questions about human nature in a heavy-handed manner that’s nothing less than transparent to the audience.

Making its debut on home video, The Experiment is worth viewing for those unfamiliar with the far superior German film, which avoids the cringe-worthy ‘happy ending’ given here. How can a story about the brutalizing animal instincts and do-what-you’re-told mentality of the human race end happily? Scheuring finds a way. What makes the experience worth a rental are the performances. Brody and Whitaker give enjoyable if exaggerated characterizations, and Clifton Collins Jr. makes an appearance as the knowing former actual inmate. And the mounting tension does manage to involve the viewer until the scattershot conclusion. Its flaws notwithstanding, this material has the production value of a theatrical release, and studios gave up an easy if small profit by passing on a distribution deal.