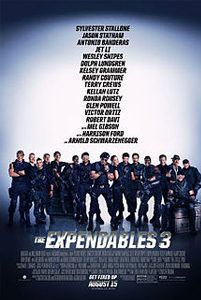 By now, fans returning for The Expendables 3 have undoubtedly grown accustomed to the franchise’s trend of high expectations followed by inevitable disappointment. Producer-star Sylvester Stallone’s ensemble shoot-em-ups—so rooted in 1980s nostalgia, manly beefcakes with big machine guns, and a fun quotient measured in achingly unfunny humor—has garnered half a billion in worldwide receipts, but that’s no account for watchability. Stallone’s commercially effective prescription for counteracting the rule of diminishing returns is to throw big-name stars at the problem, attracting viewers back with the hope that his latest collection of yesteryear’s action heroes will deliver a bigger and better experience. Indeed, the kitsch value of casting Jean-Claude Van Damme and Chuck Norris in The Expendables 2 gave the first sequel to 2011’s unsatisfactory The Expendables an improved comic-booky style, whereas Stallone pulls out all the casting stops for his third go-round. So far, Stallone’s ploy seems to have worked, commercially anyway; but he’s still failed to deliver on his promise of the action movie to end all action movies.

Harrison Ford, Mel Gibson, Wesley Snipes, and Antonio Banderas join the franchise’s cast of aged regulars, which, for those unfamiliar, include Stallone, Jason Statham, Arnold Schwarzenegger, Jet Li, Terry Crews, Randy Couture, and Dolph Lundgren. Each Expendables entry also tries to make a few new stars in the process, albeit unsuccessfully. Joining the superstar roll call of marquee names are relatively unknown additions who will surely disappear, given time: MMA fighter Ronda Rousey, Twilight actor Kellan Lutz, some guy named Glen Powell, and boxer Victor Ortiz. And with just over two hours of screentime (it’s longer than its predecessors), Australian director Patrick Hughes and writer Stallone, along with his co-scripters Creighton Rothenberger and Katrin Benedikt, haven’t the skill to give each of these actors their due, much less form particularly interesting characters or an involving story. To be sure, there are so many characters in the film, not to mention the overcrowded throng-of-a-movie-poster, that Stallone and company must never have heard the phrase “less is more”.

The film opens with a train car prison break commanded by Expendables team leader Barney (Stallone), accompanied by his right-hand man Lee Christmas (Statham), sloppy wreck Gunner Jensen (Lundgren), and one-note brute Toll Road (Couture). The mercenaries are after knife expert Doc (Snipes), one of the original five Expendables, who’s been locked away for years (“for tax evasion,” says Snipes, hilariously referencing his real-life troubles). Newly reunited member in tow, they quickly board Barney’s seaplane on their way to Mogadishu, Somalia, to take down a deadly arms dealer for the CIA. Their mission gets ugly when the arms dealer turns out to be the thought-dead Conrad Stonebanks (Gibson), who founded the Expendables along with Barney. After Stonebanks makes short work of Barney’s team and nearly kills heavy gunner Hale Caesar (Crews), Barney resolves that his team is not as “expendable” as their name suggests (aww, he cares) and cuts them loose before anyone else gets hurt. Still, Barney wants vengeance, but his new CIA handler Max Drummer (Ford) wants Stonebanks alive to face a war crimes tribunal.

To find a crew of truly expendable mercs, Barney enlists head-hunter Bonaparte (Kelsey Grammer) to find him a disposable bunch of young, forgettable killers (the afore-listed Rousey, Lutz, Powell, and Ortiz) to bring their tech-savvy approach to Barney’s standard guns-blazing tactics. But even Barney’s new team ends up captured by Stonebanks and held as bait for a final showdown between Barney and the small, fictional Eastern European army at Stonebanks’ disposal. Determined to bear the brunt of a suicide mission alone, Barney reluctantly takes on an enthusiastic wannabe, the motor-mouthed merc Galgo (Banderas), who’s willing to die for Barney because he doesn’t have any friends. Of course, Barney’s older team returns to help, along with added support from some former colleagues (played by Schwarzenegger, Li, and even Ford). Soon the old dogs and new recruits team up, and then a lot of people die and things get blown up real good like.

Sadly, none of these actors have much to do, and the mere presence of Indiana Jones, Rambo, Kindergarten Cop, El Mariachi, Mad Max, Blade, and Dr. Frasier Crane isn’t enough. Meanwhile, the worn, puffy, expired appearance of age shows on these screen icons, particularly on a weathered Ford, a crusty-looking Stallone, and a bloated Schwarzenegger. Banderas and Gibson are stand-outs, however; their over-the-top performances entertain in their surprising youthfulness: Banderas’ squirrelly behavior recalls his turn in the Stallone-starrer Assassins; and Gibson is not unlike his villain in Machete Kills!—an animated baddie and effective movie sociopath. But the screenplay relegates everyone else to various degrees of dull macho flexing, machine-gun antics, and brief cameos. Occasional moments of intentional humor arise, such as Schwarzenegger shouting for everyone to “Get to da choppa!” in that famous Predator delivery. Elsewhere, we chuckle at the lifeless, underwhelming quality that incites a watch check more than once in the overlong 2-hour-and-7-minute runtime.

Hughes stages one or two exciting action sequences, but they’re chopped to bits by editors Sean Albertson and Paul Harb, who were tasked with maintaining a limited PG-13 rating to ensure a wider audience. Except the copious bloodshed of the other Expendables entries hardly wounded the box-office results. And that, compounded by millions of illegal downloads of The Expendables 3 just weeks before its release, makes the rating decision pointless and distracting since most audiences interested in a throwback of this kind want to see bloodshed by the bucketload. (Take the opening scene where Barney’s crew strings up a cable across the train tracks to swipe the prison guard atop the high-speed train; this would cut through human flesh like a hot knife through butter, but in the world of PG-13 action, it just trips the guards on their backs.) At any rate, this sequel reminds us, once again, that the hard-R days of solid action are best left to the 1980s and early 1990s. But for those interested in pure-and-simple mindless machismo, there’s so much fist-bumping jocularity and corny one-liners onscreen that The Expendable 3 will put hair on your chest.