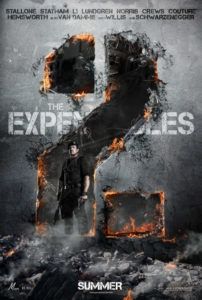 Sylvester Stallone pushed aside decades’ worth of cobwebs and turned over stones (some best left unturned) to find another bundle of Reagan-era action heroes for The Expendables 2, giving plenty of added recognition to his present B-to-D-list level castmembers, a list that includes Jason Statham, Jet Li, Dolph Lundgren, Randy Couture, and Terry Crews. New to this eighties throwback are Chuck Norris and Jean-Claude Van Damme, who, along with bigger roles for Bruce Willis and Arnold Schwarzenegger (who had only cameos in 2010’s The Expendables), make this sequel probably the meatiest hunk of machismo ever put to film. How appropriate then that Stallone has handed over directing duties to Simon West, the helmer of the Nic Cage action ensemble Con Air. (Cage, by the way, is in talks to appear in The Expendables 3. Prepare your mind to be blown by that awesomeness.)

The titular soldiers of fortune face Van Damme’s villain—named “Vilain” no less—in a Cold War-inspired plot reminiscent of any number of actioners from yesteryear. After a throwaway opener in which Barney Ross (Stallone) heads his chummy group of mercs on a mission to destroy everything in their path, dastardly Euro-trash Vilain slays the group’s latest young member (Liam Hemsworth) and with his band of Satanists makes off with a device that will lead him to several tons of plutonium kept hidden in a mine since before the Berlin Wall fell. So the next mission for Barney’s bunch becomes one of kicking butt in the name of vengeance, whereas the first movie followed their machine gun exploits as driven by a paycheck (and some nonsense about latent honor). Barney and his second-in-command, knife guru Lee Christmas (Statham), lead their usual ragtag bunch: Swedish giant Gunner (Lundgren), cauliflower-eared Toll Road (Couture), and the got-somethin’-to-prove Hale Caesar (Crews). The crew also exchanges one token Chinese member for another when Li’s Yin Yang (yes, his character’s actual name) is replaced by skilled Chinese codebreaker Maggie (Yu Nan) at the behest of CIA handler Mr. Church (Willis).

Inserting a woman into this formula is meant to break up the monotony of muscle-bound meatheads onscreen, but she’s reduced to the presence of an Other, if only by being the sole female on the team. Why not find a tough female from the ‘80s-‘90s period of action fodder (like Rachel Ticotin (Total Recall), Maria Conchita Alanzo (The Running Man), or Jenette Goldstein (Aliens)) to balance the nostalgia craze? Instead, the young and pretty Nan stands out like a sore thumb among this group of actors—all of whom look like they’ve seen better days. This is especially the case with Schwarzenegger, playing heavy gun Trench; the former California Governor is so obviously passed his prime that his character becomes a walking-talking self-mockery, both unintentional and intentional, complete with endless stale references to The Terminator embedded into his dialogue. Hey, remember me?! he seems to be saying. There are days I wish I didn’t remember, like every time I see they’re running Batman & Robin on television again. Willis looks tired too, and a Yippie-Ki-Yay reference doesn’t help.

Although there’s far more self-parody here than in its predecessor, the movie’s attempts to exploit its full cornball potential very often fail, relying far too much on a groan-worthy collection of one-liners and quips to lighten the mood. The screenplay by Stallone and Richard Wenk contains no end of razzing and jocular insults among these freakishly vascular heroes, but the banter never really makes us laugh, and very often, we’re embarrassed for those involved in such exchanges. The chief exception is Chuck Norris’ Booker, a newcomer and lone-ranger (the non-Texas kind) who acknowledges his ironic popularity as of late by embracing that series of surreal jokes about his inhuman manliness. After making an appearance set to Ennio Morricone’s theme from The Good, the Bad and the Ugly, Norris delivers a comic line that happens to be the most memorable scene in the movie.

West capably frames action scenes and presents them in a muddy palette of browns and grays, colors that somehow feel at home in the movie’s Eastern European setting of Bulgaria. But in customary modern action movie form, Todd E. Miller’s overactive editing chops West’s images to bits and presents them in short, sometimes incoherent bursts. Worse, the whole production looks grainy to a fault, even downright ugly; at times, it looks as though we’re watching an old VHS tape blown up on a theater screen. West also ups the gore ante, no doubt in reaction to complaints that The Expendables felt somewhat tame in terms of violence. Audiences looking for bloodshed have dismembered bodies and decapitated heads to look forward to. Before the opening titles, the body count breaks fifty at least. By the bullet-riddled finale, the death toll is somewhere in the hundreds. But the best piece of action arrives at the conclusion during Stallone and Van Damme’s one-on-one, an impressive display of physicality from both actors. Still, I would have preferred to see Van Damme’s renowned martial artistry go up against that of Statham, Norris, or Li. Or maybe all of them at once.

Admittedly, Van Damme’s villain, silly as his character may be, makes this movie more watchable than it has any right to be. A character who wears sunglasses even in an underground mine, Vilain imbues The Expendables 2 with a much-needed antagonist as cartoonish and effectively over-the-top as the muscle-bound heroes on the good side. He’s a black leather and sunglasses-wearing European Satanist after nuclear weapons. It doesn’t get much more comprehensive than that. If only the one-liners and banter were as effective in their knowing sense of cheese. But much to my surprise, the most off-putting element was not the living relics giving tired performances or even their atrocious, unfunny repartee; it was the production’s grimy technical elements that never stopped distracting me. But based on all of the cheering and affectionate guffawing in my screening, the average moviegoer won’t mind. If you can get passed how much like an ‘80s actioner this movie looks (in a bad way), with lowered expectations and an appetite for mindless entertainment, you might savor this violent nostalgia trip. I’d rather just watch Cliffhanger, Die Hard, Predator, and Universal Soldier again.