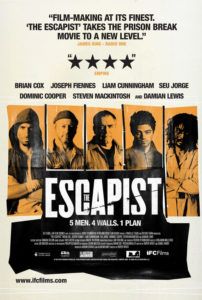 The Escapist captures the exquisite potential of that oft-mishandled prison escape genre, existing within the formula without wearing it down. It’s the feature film debut of writer-director Rupert Wyatt, an Irish filmmaker that shows incredible promise. Made in the United Kingdom by the Irish Film Board, with funding from the arts-friendly minds at the National Lottery, this small picture arrives by way of IFC Films, who have done North Americans a great service as of late by importing small gems like this one.

Wyatt wrote the film’s central role specifically for actor Brian Cox, who plays Frank Perry, a lifer grounded into the steady prison rhythm dependent on the brutal politics of inmate ranks. On top of the barren complex’s hierarchy sits Rizza (Damian Lewis), whose basis of rein isn’t explained within the film, but it’s enough to know that for whatever reason the other inmates fear him. He’s followed by sniveling junkie-rapist Tony (Steven Mackintosh), whose eye is on Frank’s new cellmate Lacey (Dominic Cooper), a young man with too much innocence in his eyes to survive prison life.

Frank receives a letter from his wife, the first in his fourteen-year imprisonment, telling him his daughter has become a drug addict and will likely die. Wheels turn out of necessity and Frank devises a plan to escape, to return to his broken family, through the dryer vents in the laundry and into the sewers that eventually meet with Charing Cross station in London. Along with capable help, the resourceful Brodie (Liam Cunningham) and thief Lenny (Joseph Fiennes), Frank juggles looming dangers from Rizza and Tony with his sudden desperation to escape to freedom.

A minimalist production, the impressive performances carry the picture along without benefit or need for showy camerawork or wowing special effects. All the action we need takes place on these actors’ faces. Cox wonderfully conveys Frank’s brooding through his weary mug and understated presence, his low-key magnetism subtly giving way for surprising portrayals by the film’s ensemble cast. Fiennes, for example, would seem an unlikely choice for a hard-edged prison boxer, but he evokes his part with unexpected ferocity. And then there’s Cooper, whose silence and wide-eyed terror render him immediately sympathetic in this callous atmosphere.

Intercutting between the planning stages and the actual escape, the film’s juxtaposition serves the narrative well, whereas normally such non-linear storytelling might prove distracting. Indeed, the back-and-fourth structure holds a weight that remains cleverly concealed until the last frames, which provide a twist of grave proportions. The plot itself resembles something between HBO’s Oz and Jules Dassin’s Brute Force, since the film follows the latter’s outline of a man obsessed with breaking out to be with a sick loved one. But considering how many films you’ve probably seen about prison escapes, this one does something different with its composition and deserves applause for refreshing the genre.

The Escapist is a stylish effort that does what few in this genre have done: it remains at once gritty and elegant while telling an involving yarn. Despite the vast potential for allegory in prison escape films—seized by landmarks such as Grand Illusion and The Shawshank Redemption to provide a parable for the imprisoning reality of everyday life, governments, war, etc.—Wyatt succeeds by simply telling a compelling, straightforward story. Every scene is tightly bound to the next by concealed visual nods and restrained dialogue, which, coupled by the film’s naturalism, makes for raw, satisfying suspense.