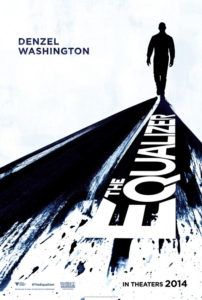 The Equalizer has the unique displeasure of being a total bore and yet completely over-the-top. Based on the CBS television series (1985-89) of the same name, the story follows a former CIA agent who becomes a do-gooder for hire. The film was directed by Training Day helmer Antoine Fuqua, who transformed the material into a bloodbath, not unlike his recent hit Olympus Has Fallen. Denzel Washington takes on the character originated by Edward Woodward, and it’s a thankless role where Washington’s considerable talents are put to use disposing of bad guys with power tools, while the actor’s cool composure never breaks the character’s brooding presence. Audiences who loved Tony Scott’s Man on Fire, which featured Washington killing countless villains in an over-edited music video presentation, will feel right at home in this stylistically inconsistent mess.

Screenwriter Richard Wenk (The Mechanic remake, The Expendables 2) alternates between scenes of ham-fisted character development and grotesque displays of violence. Bostonian Robert McCall has been transformed into a fussy bookworm whose days are spent pushing lumber at “Home Mart” (apparently Home Depot wanted nothing to do with this) and spends his nights at a 24/7 diner, where he straightens his silverware, reads classical literature, and talks to the film’s resident hooker-with-a-heart-of-gold, Teri (Chloe Grace Moretz). Instead of driving a Jaguar as he did on the TV show, the character rides the bus and carries a prevailing case of OCD. Plodding scenes where Washington’s affable McCall interacts with his fellow Home Mart employees, including a heavyset coworker (Johnny Skourtis) whom McCall helps pass a security guard exam, drag on. As the film develops McCall as a quiet, intelligent Good Samaritan—perhaps in anticipation of bloodshed to follow—as the viewer grows restless.

After about 30 minutes or more, this slow-burning actioner starts to crackle, and that time spent developing McCall as a precise man gives way to contrasting scenes where he unloads his violent exactitude. When Teri ends up in the hospital, having been beaten by her handlers, McCall visits their club and dispenses with the lot in a grisly fashion, using knives, guns, a corkscrew, and even a shot glass to eye-gouging effect. Turns out they were Russian gangsters involved in an intricate network of organized crime, and their Moscow-based crime lord sends enforcer Teddy (Marton Csokas, a New Zealand-born actor who’s played all sorts of Euro-trash over the years) to investigate. Teddy comes covered in tattoos and hissing villainous orders to no end of incompetent goons and corrupt cops on his payroll, all incapable of finding McCall. And once McCall finds out who Teddy is, and who Teddy works for, thanks to his old Agency pals (Melissa Leo and Bill Pullman), McCall resolves to unleash hell.

When the film goes into full action movie mode, Fuqua’s darkly lensed, atmospheric presentation becomes a grim and gory procession of explosions and death. Not that we can really tell what’s going on. Cinematographer Mauro Fiore tries to evoke the rusty wash of David Fincher’s Alien 3 throughout, and that prevalent darkness, along with scattershot editing by John Refoua, at times makes the shot-by-shot logic incomprehensible. The final showdown in Home Mart splatters onto the screen with a number of schlocky deaths where McCall uses a variety of power tools and home improvement equipment to dispose of Teddy’s body count gang. Barbed wire, a tree trimmer, a power drill, and a nailgun all come in handy, yet leave us wondering what McCall has against your garden variety gun. The barbarism on display seems so out of place in a film that, in its first hour, tried to build a credible character study through some slow-moving, almost poignant scenes.

But then, that’s the illusion an actor of Washington’s caliber can create; he can turn his crooked detective from Training Day into an Oscar-winning performance, and he can make The Equalizer seem better than it really is. Without Washington, this would be an unwatchable disaster. And everyone else but him seems to understand that they’re in based-on-a-TV-show drivel—like Csokas, who’s only a little less cartoonish here than he was in The Amazing Spider-Man 2. Fuqua, especially, delivers a product divided by its laborious pacing and its more commercially attuned mean streak. The loud, uncharacteristic music played over slow-motion sequences of violent acts seems more attuned to a music video. Add a CGI downpour from Home Mart’s sprinkler system, and you have a film that over-stylizes violence and tries to find its character in long, tedious stretches exploring McCall’s fastidious routine. And at 131 minutes, Fuqua punishes his audience with clichés and dull subplots, when really all he’s done is give us a slaughterhouse with an interesting façade.