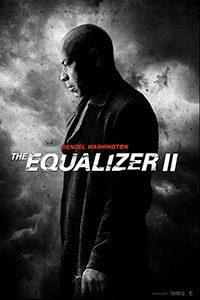 Antoine Fuqua often makes movies about dangerous, highly-trained loners facing down a corrupt institution or an unbeatable cadre of bad guys in no-win scenarios. Let’s review: Back in 2000, he made Bait, featuring Jamie Foxx as a hustler who outwits both the feds and the criminal underworld. In Shooter (2007), Mark Wahlberg played an exiled sniper who embarks on a solitary mission to take down conspirators in a presidential assassination plot. Olympus Has Fallen (2011) featured a former Secret Service agent single-handedly saving the President of the United States from a siege on the White House. Fuqua’s remake The Magnificent Seven (2016) pitted seven roguish heroes against a small army of bandits. And, of course, in The Equalizer (2014), Denzel Washington plays Robert McCall, an ex-special-ops-turned-badass-Good-Samaritan whose gimmicks involve helping those in his Boston neighborhood, dispensing with baddies in the most gratuitously violent ways possible, and timing his elaborate beatings on his wristwatch for some inexplicable reason.

The sequel, The Equalizer 2, cuts down on the absurd violence of the first film, which found McCall using power tools on Russian gangsters in ridiculously gory action scenes. In what is perhaps an overcorrection of the original’s excessive bloodshed, Fuqua delivers a much slower, leisurely paced sequel that tests the viewer’s patience and remains light on killing (compared to the original, anyway). The screenplay by Richard Wenk takes its time reestablishing McCall, an obsessive-compulsive lone wolf who has since given up his job at “Home Mart” to drive for Lyft. Wenk explores several extraneous subplots involving McCall’s passengers and other ponderous scenes of the hero quietly reflecting, suggesting Fuqua thinks he’s making an existentialist crime saga on par with the works of Jean-Pierre Melville or Michael Mann. But the substance of The Equalizer 2, nonsensically dubbed “EQ2” on promotional material, remains thin, and the film’s plodding tempo makes its two-hour runtime feel much, much longer.

The first minutes involve protracted establishing shots of the Boston skyline and landmarks, as well as throwaway moments of McCall driving random Lyft passengers to their destinations. The sheer volume of B-roll footage throughout The Equalizer 2—much of it shot by cinematographer Oliver Wood using drone photography—is astounding, and exteriors of eventual locations in Belgium and Washington D.C. become tiresome and banal given their frequency (in part due to the globe-trotting script). Add to this Wenk’s penchant for unnecessary subplots, and the viewer spends much of the film’s length waiting for something meaningful to happen. It’s as though Fuqua and Wenk resolved to combine the most uninteresting parts from several episodes of the original 1980s television series into a single film, leaving the result to feel sluggish. Take the unnecessary subplot about McCall helping a senior citizen (Orson Bean) locate his long-lost relative, separated since World War II; its absence could have easily trimmed down the proceedings by ten minutes or so. It serves no purpose to the larger story, nor does the random aside about McCall giving a beatdown to a bunch of spoiled brahs who abuse a young woman (though the outcome is much more satisfying here).

The main throughline concerns McCall’s former colleague, Susan Plummer (Melissa Leo), getting murdered in her Belgian hotel room after investigating the supposed suicide of a CIA agent. After looking at the case, McCall realizes that Susan’s murder, made to look like a robbery-gone-wrong, leads to something more nefarious involving another former colleague (Pedro Pascal). Meantime, McCall befriends a neighborhood teen, Miles (Ashton Sanders, from Moonlight), who teeters between becoming an artist and falling in line with a group of local gangsters. Wenk forces these two plot strains together in ungainly ways, while also revealing more about McCall’s mysterious past. Vague allusions to the vigilante’s dead wife and departure from the CIA shroud McCall in a clichéd cloud of mystery and tragedy. Washington, of course, lends tremendous charisma to his character’s screen presence, but Wenk doesn’t give McCall or Washington much to do.

Once the action picks up in the final twenty minutes, the climactic sequence proves laughably conceived, with a final shootout in an abandoned coastal town during an oncoming hurricane. Imagine a sniper atop a tower during 100-mile-an-hour winds, and yet somehow he’s able to shoot straight from hundreds of yards away. Seems unlikely. Not that it matters—McCall slices, dices, and explodes the opposition, with Fuqua getting his camera deep into the viscera. Fuqua’s camera choices are erratic; he uses shoulder-mounted cameras, dramatically low or high angles, and a goofy effect that disappears into McCall’s eye to show the viewer how he envisions a future fight. Somewhere between Sherlock Holmes and Batman, McCall is a modern, everyday superhero—a comparison the film is happy to make.

Besides the ending’s shootout and one or two exciting moments in the middle, Fuqua saturates his film with dull and empty scenes intended to convey McCall’s inner state. McCall sits in silence, he reads, or he drives Lyft and listens to his passengers talk. Sometimes he contemplates silently, fussing over his dinner or the arrangement of green apples, and the only sound in the scene is the ticking of a clock. Several quiet moments like these take place in the film, but they don’t amount to a character revelation. But this is transcendental filmmaking devoid of substance. Indeed, The Equalizer 2 leaves the viewer with a boredom hangover—a cloudy funk that lingers well after the credits roll, taking hours to dissipate. One of the worst crimes a filmmaker can commit is making a boring movie, but Fuqua, whose first Equalizer broke up the monotony with mindless violence, doesn’t offer his audience many cheap thrills. The alternative, however, is not so elevated as those involved would have us believe.