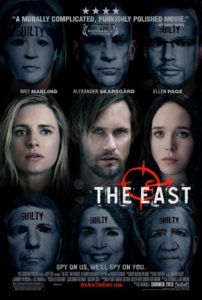 An engaging thriller that not only has a worthy ecological commentary but contains an effective discussion about the morality of eco-terrorism, The East is the fascinating second feature from co-writer-director Zal Batmanglij and producer-star-co-writer Brit Marling. The two collaborated on 2011’s Sound of My Voice, a seductive, eerie drama about an investigation into a cult leader and, ultimately, the power of belief. And once again, they consider the power of a cultish faction here, albeit within a more accessible structure and human narrative. Released by Fox Searchlight, the film suffers from an obligatory romance subplot and some predictable turns, but the strong ensemble of actors and interesting moral questions keep us involved until the very end.

Marling, whose career is surging not unlike Jessica Chastain’s was a year ago, plays Sarah, a former FBI agent now newly contracted with Hiller/Brood, an “independent security company” so secretive the public doesn’t know they exist, and whose undercover agents provide risk assessment by infiltrating corporate threats. In her first assignment, Sarah is tasked with gaining access to “The East,” an activist group delivering eye-for-an-eye punishment to executives responsible for crimes against the environment or humanity but who will never serve jail time. For example, when a spill releases gallons of crude oil into the Atlantic, The East responds by flooding the home of the oil company’s CEO with Texas tea. Sarah tells her boyfriend (Jason Ritter) that she’s going to Dubai on an extended business trip, but she actually joins the hobo underground in hopes of reaching The East. Before long, she’s found herself in the middle of the woods, where she’s led to a burned-out house, the HQ of The East, and its resident Jesus-like leader, the soft-spoken, self-righteous Benji (Alexander Skarsgård).

Less a cult than a hippie commune populated by wounded loners, The East operates under Benji’s command, but they behave like a close-knit group of friends, sharing experiences, food, and affections in a New Age sort of way. The fervent member Izzy (Ellen Page) distrusts Sarah, while an affable former doctor (Toby Kebbell) takes a shine to her. Though she’s slowly drawn by the charisma of their sympathetic group, Sarah soon finds herself participating in one of their “jams”—their term for what others might call an eco-terrorist attack. At a posh fundraiser for a pharmaceutical company, The East intends to put the company’s latest FDA-approved, yet entirely toxic drug into the guests’ champagne, giving them a literal taste of their own medicine, a drug whose side effects include extreme memory loss and tremors. Should Sarah save the guests and stop the “jam,” or should she allow it to proceed and preserve her cover? As her ruthless Hiller/Brood boss (Patricia Clarkson) reminds her, the pharmaceutical company isn’t their client, so let them drink.

There are a few intriguing moral quandaries like this one throughout The East, and the film poses these questions without becoming too obvious or climbing on a soapbox. Other targets sought by The East, including a petroleum company dumping arsenic into a small town’s water supply, appear, and therein the film raises awareness about such ripped-from-the-headlines environmental concerns. There’s no disputing that someone should answer for atrocities committed by The East’s targets. Sarah realizes she agrees with this and becomes impassioned by The East’s mission, at least in principle. It’s their execution that becomes too extreme for her. The question then becomes one of the best ways to create grand-scale awareness about such environmental and medical crimes, and then how to punish those responsible. Does the climate of corporate corruption mean there’s no other way for justice to be served than through acts of potentially deadly eco-terrorism? Sarah, always looking for an unexpected angle, cannot ignore the problem, nor can she engage in The East’s increasingly fanatical methods, but she must answer these questions.

The fine cast members—including the soulful Skarsgård, the blazing Page, the coolly pitiless Clarkson, and a brief appearance by Julia Ormond as an executive incapacitated by her company’s product—are all solid in their roles. Marling, also seen in Another Earth and Arbitrage, is the obvious standout, playing a character with much hidden and a compelling moral dilemma to resolve. The East leaves us thinking about its themes throughout and afterward, and ultimately we’re drawn into post-screening What would you do? and How do you feel about it? debates. Are such guerrilla tactics counterproductive? Do they strengthen the cause by raising awareness? How far should the group go to ensure justice is served? Is awareness more important than justice? Intriguing questions notwithstanding, Batmanglij and Marling’s script missteps when it forces a romantic subplot between Sarah and Benji, but this is easily overlooked for the film’s otherwise skilled execution and steady resolution to the hotly contentious subject matter. That the film leaves us thinking about our morals yet has involved us in the entertaining intrigue of a spy drama is a testament to its effectiveness as a thriller and a project with something to say.