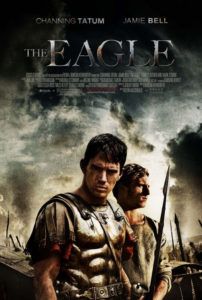 A paper-thin allegory for America’s blindness to other cultures, The Eagle adopts the pretense of a classical Roman adventure but has neither the scope nor the acting chops to back its intentions. Directed by The Last King of Scotland and State of Play helmer Kevin Macdonald, this costume epic takes place mostly around 137 A.D. in Britannia, where twenty years prior Rome’s Ninth Legion with its 5,000 soldiers went missing. After their disappearance, Hadrian’s Wall was erected, a number of Roman garrisons were placed near the border, and millennia later several lackluster movies were based on the subject. Last year brought Neil Marshall’s Centurion, a low-budget production headed by a great actor (Michael Fassbender). Swapping strengths, Macdonald’s film boasts impressive production value and an eye for historical detail, but the film suffers from a leading man who emotes less than a marble bust.

Channing Tatum plays Marcus Aquila, son of the general that led the Ninth Legion to presumed disaster in what is now Scotland. His family name still dishonored because his father lost a legion, and with it the Golden Eagle, a symbol of the honor of Rome, Marcus is haunted by his father’s fate. Newly assigned to an outpost in Britannia, he earns near fatal wounds defending his men, and later an honorable discharge. While healing from his battle scars at the villa owned by his Uncle Aquila (Donald Sutherland), he saves the life of a Celtic slave named Esca (Jamie Bell), earning himself a personal slave with a lifelong debt of allegiance in the process. So when Marcus sets out on a mission to recover the Eagle and solve the mystery of the Ninth Legion, Esca goes along as his guide. What builds is an unlikely if predictable friendship between a Roman and his slave, wherein tables are turned across the wall and they’re forced to trust one another to survive.

Tatum and the other actors portraying Romans employ stagey American accents, whereas the barbarian tribes speak with Scottish or English accents. Here’s your first clue that Macdonald and screenwriter Jeremy Brock (Charlotte Gray), whose script is based on Rosemary Sutcliff’s book, intended the film to have some modern day relevance. Romans make easy stand-ins for Americans, as both empires share similar historical ups and downs, but the metaphor is a transparent one. Any hope for clever propaganda is lost when the unintelligible battles take over. In early scenes, Macdonald shows the tactical efficiency of Roman soldiers, how they form a wall of shields and move as one. Tame for a swordplay epic, there’s a conspicuous lack of blood onscreen, no doubt to make the PG-13 rating. But the choppy editing by Justine Wright—which reduces epic skirmishes into blurs of swords, fallen body parts, and battle cries—prevents the viewer from seeing exactly how the block of men moves and operates and attacks.

More than today’s all-too-common over-edited action scene, the film suffers from Tatum’s constant vacant expression and varying accent, which defuses any otherwise rousing speeches about honor and the glory of Rome. He’s certainly built for the role in terms of muscle mass, but his unreadable visage lacks any hope of capturing the gravitas of his character. He should have learned a thing or two from Bell, who smolders with intensity, yet whose character isn’t given enough background to be considered dynamic. Mark Strong, well into his campaign to appear in every movie ever, has a minor but significant supporting role as a Roman deserter who questions his empire’s intentions.

Concerned primarily with the budding friendship between Marcus and Esca in the end, The Eagle becomes absurdist fantasy when, by the last scenes, they’ve solved the mystery of the Ninth Legion and returned to tell the tale. Slapping a happy ending onto one of the great historical mysteries seems wrong somehow, and in doing so, the filmmakers missed an opportunity for momentous tragedy to follow the film’s brooding notions on the glories of an honorable death. Aside from some exciting moments and one or two decent performances, the production feels a step up from the likes of Centurion, but hardly the epic treatment an appropriate telling of the Ninth Legion legend deserves.