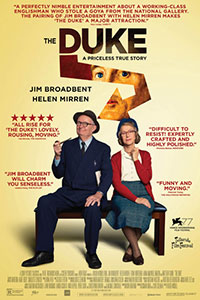 Who better than Jim Broadbent to play a character named Kempton Bunton, the everyman hero of The Duke? Broadbent has given us this kind of wily hero before, never better than ten years ago as Timothy Cavendish in Cloud Atlas, the rambunctious publisher committed to a nursing home by his cruel brother. The actor’s disarming silliness often accents his tender old owl roles, evidenced in his collaborations with Mike Leigh, or in the Harry Potter and Paddington franchises. As Kempton, the Newcastle upon Tyne pensioner who can’t hold onto a job and always has a cause, he’s an unlikely champion of social justice. Based on a real-life figure and autodidact, Kempton stands up to a bigoted supervisor for his Pakistani coworker in a bread factory, and he wants to secure free television licenses for British citizens. And when he steals the National Gallery’s recently acquired portrait of The Duke of Wellington, painted by Francisco de Goya around 1812, he does so not for profit or even because he likes the rendering (which he does not). It’s for the greater good.

How exactly art theft becomes an altruistic act remains, objectively, a curiosity. But that’s part of the charm Broadbent brings to Kempton. The authorities interpret his ransom notes, written in a “childlike scrawl,” as the work of an imposter, believing the job was carried out by a “well funded, well organized criminal gang.” Kempton, bespectacled and wobbly, is unassuming—a working-class idealist whose string of personal causes and activism clash with his reserved, downright repressed wife Dorothy (Helen Mirren). Long ago, the two lost a daughter, and she maintains that “grief is private.” It’s a rule that prevents Kempton from talking about their loss, so he works through his feelings in his amateur teleplays, which go summarily ignored by the BBC. Although they have two adult boys (Fionn Whitehead, Jack Bandeira), there’s a deep sadness in their home. Kempton has resolved to live since the loss, and Dorothy has resigned herself from discussing it. Then again, her disapproval of Kempton for his inability to keep a job or stay out of jail for petty offenses proves understandable.

The Duke unfolds as Kempton, who stole the painting to secure £140,000 in ransom, which he intends for charity, tries to hide his crime from Dorothy. When faced with exposure, he resolves to turn himself in, and a court case ensues. The Duke isn’t a courtroom movie, but those scenes at the Old Bailey, occupying about 30 minutes of the 96-minute runtime, lead to humor and humanity. His barrister, Jeremy Hutchinson (Matthew Goode), who was married to actress Dame Peggy Ashcroft in real life, recognizes Kempton’s reasons, even if they don’t align with the law in the strictest sense. The court clerk and public in attendance cannot help but laugh along with Kempton’s blue-collar humor and earthy wit, yet they also feel affected by his familiar motivations: Early in the movie, Kempton sits down to watch The Adventures of Robin Hood (1938), a Technicolor film, on his black-and-white television set. He’s no Errol Flynn, but the famed outlaw who stole from the rich and gave to the poor clearly inspired him. 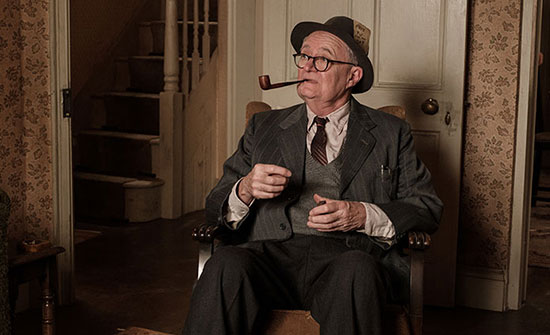 This marks the last film by director Roger Michell, who died last year at the age of 65. Michell started out in memorable BBC television productions, including The Buddha of Suburbia (1993) and Persuasion (1995), one of the best adaptations of that Jane Austen book. He also left his mark on cinema, helming the breakout hit Notting Hill (1999), and more recently Venus (2006) and My Cousin Rachel (2017). A director who knows how to make the most of his cast, Michell draws excellent performances out of his two leads, Broadbent and Mirren, in quiet scenes situated at home, complete with drab wallpaper and bad lighting. Production designer Ken Adam convincingly replicates their modest interiors, their little world on a forgotten street this side of nowhere. But for Kempton, it doesn’t matter where he comes from. Those in control in Parliament, at the BBC, and the National Gallery represent the opposition to the common man.

The Duke debuted at the Venice Film Festival in 2020, but delays due to the pandemic has left the film sitting and waiting. Anglophiles and art theft enthusiasts alike will find the material pleasant and entertaining, with an undeniable dignity propelling the story. Michell and editor Kristina Hetherington package the opening and last minutes with some snazzy split-screen effects, suggesting the movie’s roots as a caper. But those affectations do more to distract from the preferable mild-manner temperament of The Duke. This isn’t a satirical Ealing Studios comedy—the film doesn’t poke fun at Kempton Bunton; its sincerity is genuine. Screenwriters Richard Bean and Clive Coleman, who collaborated on the plays Great Britain and Young Marx, create aching scenes with Dorothy finally recognizing that her husband has been feeling not only grief but guilt over their daughter’s death. Even though it seems like lighter fare, the story has a way of sneaking up on you.

The Duke belongs on a list of British comedies about common folks causing trouble and upsetting the status quo, albeit in the most affable way imaginable—everything from Whiskey Galore! (1949) to The Best Exotic Marigold Hotel (2011) to Dream Horse (2020) to this year’s The Phantom of the Open. Movies like this seem simple and sentimental, but they’re also about class and fighting elitism. Thus, they’re embedded with a natural catharsis. There’s no villain in the film, no one to receive their comeuppance. Rather, it’s about acknowledging the suppressed and ignored, and recognizing that they have value, despite appearances, income, and a goofy name. For those modest delights, and the perfectly attuned performances by the cast, The Duke elevates itself from a trifle to a must-see pleasure.