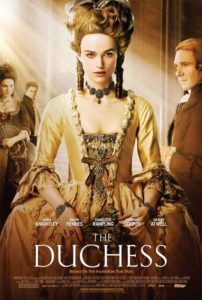 As a probe into the sexual politics of eighteenth-century England, The Duchess effectively paints an unremitting portrait of how love and breeding greatly differed among the social elite. Inside extravagant salons adorned with every manner of ornamentation, aristocrats play childish games dressed in layer upon layer of impossibly uncomfortable clothing, sporting grand wigs, wide panniers, and tiny shoes. Their behavior and fashion sense may seem rather strange to us now, but it all followed a strict decorum, including matters of the bedroom. Married off at sixteen, Georgiana Spencer became wife to William Cavendish, the fifth Duke of Devonshire. Though said to be marrying for love, William makes his requirements clear from the start: Georgiana is to remain an obedient wife, and to produce him a male heir. As played by Ralph Fiennes, William is portrayed as vacant, uninterested in all subjects apart from continuing the family line, and while he may be a despot, he simply adheres to the full bureaucratic cruelty allowed by his station.

Keira Knightley plays the Duchess of Devonshire, a woman with more depth, feminist wit, hand for gambling, keenness for humanism, and sense of style than those equated to her. Acclaimed for her contributions to fashion, she was not merely an excessive materialist as is often attributed to Marie Antoinette. Rather, she supported Revolution for both America and France, aligned herself with noted Whig liberal Charles Fox (Simon McBurney), and wasn’t opposed to trading an innocent kiss for the promise of a vote. Her marriage to William, arranged by her mother (Charlotte Rampling), quickly becomes mechanical as the Duke sees her as a tool for baby production. But his passions are spent on mistresses and maids, as his disappointment in Georgiana’s two miscarriages and two daughters does not allot for loving forgiveness. When Georgiana befriends the needy Lady Elizabeth Foster (Hayley Atwell) and brings her to their home at Chatsworth, in Derbyshire, the Duke wastes no time in bedding her, degrading his marriage in an open forum, and also robbing Georgiana of her one friend. Forced to accept that “Bess” Foster is now a live-in mistress, Georgiana sarcastically refers to William as “our husband” with a pained voice.

Not made in the period epic mode to which Elizabeth, its sequel, and The Other Boleyn Girl conform, the film doesn’t distance us from the characters with its grandiosity. Instead, we’re easily drawn to the Duchess’ sympathetic situation, and later relieved when she finds a lover of her own in Charles Grey (Dominic Cooper), the second Earl Grey (after whom the tea is named). As opposed to being raped by her husband for a boy beneficiary, we rejoice when she finally makes love in that steamy, Hollywood way to someone who loves her. Unfortunately, William’s sort of sexual transgressions are not permitted for Georgiana, and so his hypocrisy knows no bounds, and her story becomes a tragic history.

Knightley has almost exclusively placed herself in period roles, from last year’s Atonement to the Pirates of the Caribbean franchise, and it’s clear this is where she’s most comfortable. Though far too thin to represent a member of the well-fed nobility, Knightley projects all the airs of high drama and romance we’d expect from the sad tale of the Duchess. After dribble like King Arthur and Domino, writing her off was much too easy, but she continues to impress with her fine work in this genre. Fiennes, on the other hand, makes a wonderful tyrant (as seen in the more popular setting of Harry Potter 4 & 5), at one moment completely void of human compassion, the next offering heartfelt apologies that despite his cruel behavior, we believe. He’s an actor capable of moving back and forth between highly mainstream fodder and artistic fare such as this, carting his intense onscreen presence wherever he goes.

The first major effort by British director Saul Dibb, the production makes striking use of actual locations without losing us to them. We’re never more concerned with the scenery than we are with the characters occupying them (even so, appreciating the refined elements in the backdrop is one of the film’s most welcomed pleasures). Decorated with precise and period-accurate trimmings, The Duchess’ humanity in the course of scandal and melodramatic flames stands resolute, and remains undeniably absorbing.