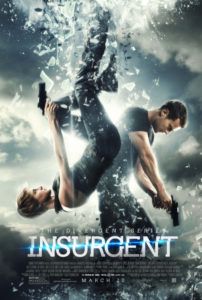 Insurgent marks the second entry in Veronica Roth’s young-adult book trilogy, and like the Harry Potter, Twilight, and The Hunger Games franchises before it, Hollywood’s “greed is good” strategy requires dragging out this newly named The Divergent Series as long as they can. The second book in the trilogy becomes the second of four planned features, as the final chapter Allegiant arrives in two installments planned for 2016 and 2017. Despite the success of Divergent, that film’s director Neil Burger and his writers have been replaced by Red helmer Robert Schwentke, whose trio of scribes haven’t remained faithful to Roth’s source. First-time screenwriter Brian Duffield, Mark Bomback (Live Free or Die Hard), and Akiva Goldsman (A Beautiful Mind) deliver a franchise sequel that fabricates an action device not in the book. The device not only fails to deepen the mythology of the series, but annoyingly retreads themes established in the first, all while purveying a sappy degree of teen melodrama and genre formula.

Walls surround Chicago and enclose Roth’s post-apocalyptic world; outside there is only wasteland. Inside, society has been segmented into five factions: Amity consists of happy farmers, the people of Abnegation are charitable, Candor is populated by the truthful, Dauntless is for the brave, and the Erudites are intellectual. Of course, a group of Factionless exist too, led by Naomi Watt’s formidable Evelyn, who wants to lead a war against the faction system’s power-mad Erudite leader, Jeanine (Kate Winslet). So threatened by existence of Divergents (those who do not fit into just one faction), Jeanine has plans to hunt them down with a vengeance. The writers have also concocted a MacGuffin to thrust the otherwise monotonous plot forward. Inside a secretive box, which was created by the Founders of this world, and which can only be opened by one of extreme Divergence, exists a message from the Founders. Jeanine hopes the message will explain how to rid her self-contained world of Divergence once and for all.

Our hero, the grandmamma of all Divergents, Tris (Shailene Woodley) is the resident Neo from The Matrix, otherwise known as The One, The Seer, The Receiver, or any other of the prophesied heroes from such franchises. Tris and her fellow fugitive pals, including her hunky boyfriend Four (Theo James), hole-up in the folksy Amity settlement for sanctuary, courtesy of its leader Johanna (Octavia Spencer). There, Tris deals with some major guilt over inadvertently causing the death of her parents (Ashley Judd and Tony Goldwyn, appearing in flashbacks, dreams, and virtual reality form), and to cleanse herself in the opening scenes she cuts her hair. Once she completes a style change with a pair of rusty old sheers (after which she looks to have received a cut and highlight job from a high-couture salon), she realizes it takes more than a short new hairdo to absolve oneself of debilitating guilt. She resolves that revenge—specifically, killing Jeanine—is the best solution to her existential crisis.

Meanwhile, Jeanine locates the Founders’ box and sends her top goons, Eric (Jai Courtney) and Max (Mekhi Phifer), to find Divergent test subjects. The subjects are forced to endure a series of virtual reality trials designed to test their understanding of each faction. The Divergent who passes all five tests will open the box. Of course, only someone with Tris’ degree of Divergent-ness could pass every exam. Jeanine realizes this, and she begins tormenting the various factions until Tris surrenders. As the story plods forward under Schwentke’s flat direction, Tris is betrayed by her lanky brother Caleb (Ansel Elgort) and the motor-mouthed Peter (Miles Teller), and she and Four seek refuge with the Factionless leader Evelyn, who happens to be Four’s mom. It all leads to a twist-heavy finale where Tris surrenders to Jeanine, opens the box, and learns its secrets. Much of Insurgent’s lasting effect resides in the content of that message, which will be discussed in detail within the last few paragraphs of this review.

When the box opens, the image of a Founder appears and explains that their enclosed world is part of an elaborate experiment contained within Chicago’s walls. The Founders sought to create well-rounded individuals not through factions, but through the inevitable creation of Divergence. In other words, Tris is the ultimate goal of this program. The message also invites everyone outside of the walls to find the Founders. Besides evoking M. Night Shyamalan’s The Village, or more recently The Giver and The Maze Runner, this utterly silly and predictable twist is just one of many in Insurgent. Tris experiences no end of VR-related head-spinners when she’s trying to open the box for Jeanine too. More than once, the film tries to trick the viewer into thinking the simulation has ended, but it hasn’t. Not that we were ever fooled. Since I haven’t read the books, I have to wonder what happened in its pages—especially since Roth’s book contained no box, and the box takes up a considerable amount of screentime.

Anyway, Schwentke delivers CGI-heavy action scenes, dream sequences, and simulated tests to make use of Insurgent’s much-advertised IMAX and 3-D presentation, although the visuals are far from impressive. The film’s lesser budget of around $80 million (compared to Catching Fire’s $130 million) speaks to the B-level quality of this young adult franchise compared to The Hunger Games and Harry Potter. However, the production also fails to impress because Schwentke hasn’t created the dramatic tension to make the FX sequences operate on a significant emotional level. Still, just as in Divergent, the film concerns itself with characters more than this world’s sci-fi scope, gunplay, or hand-to-hand combat. And so it’s unfortunate that the characters aren’t that interesting either. Woodley’s performance is serviceable, although she’s a long way from Jennifer Lawrence’s fiery, damaged presence in The Hunger Games and its sequels. Actors like Winslet and Watts have far too much talent to waste it here, whereas the script doesn’t allow for the talented younger supporting cast (namely James and Teller) to deliver much beyond one-note characterizations.

The Divergent Series contains neither the production value nor the acting chops to compete with its likened franchises, aside from Twilight, which it narrowly betters. Not even devoted readers of the book could apologize for Insurgent’s contrived plotting, given that it was invented for the film, while moviegoers can only feel insulted by its twists. Whenever this kind of dystopian world is contained within walls, on the other side of which exists an unknown world, you can bet the Logan’s Run scenario will turn the world upside-down, revealing its inhabitants are all clueless to their role in some elaborate, far-reaching experiment. It’s a plot device as overused as split personality disorder or the “it was all a dream” phenomenon. On the banality of the plot alone, this sequel underwhelms and insults. And if Insurgent is any indication, audiences should meet the two-parter Allegiant with lowered expectations.