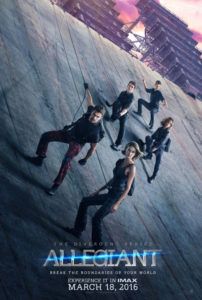 Another cinematic trip into author Veronica Roth’s best-selling trilogy, another narratively malnourished ration of standard YA themes. Summit Entertainment’s The Divergent Series: Allegiant is the third entry in a planned four-parter, following Hollywood’s new formula of halving the final book in a trilogy split. But unlike the earlier split finales of Harry Potter and The Hunger Games, there’s a considerable shortage of suspense at the end of Allegiant, and therefore little anticipation for its second half, Ascendant, due summer of 2017. Not even enthusiasts of Roth’s post-apocalyptic novels have much to savor here, since the trifecta of screenwriters—Noah Oppenheim (The Maze Runner), Adam Cooper (Exodus: Gods and Kings), and Bill Collage (Tower Heist)—have deviated much from the source material. Although this sequel features more action than its predecessors, it’s difficult to care about much of anything happening onscreen, especially after the yawn-worthy Insurgent.

Speaking of Insurgent, that film ended with the factionless upstart Evelyn (Naomi Watts) usurping the authority of Erudite dictator Janine, at which point the survivors charged the open wall of their closed Chicago home in freedom. Like a bad serial cliffhanger, Allegiant places Evelyn’s armed guards in front of the wall. Evelyn begins a new evil regime by putting the former leaders on trial and executing them for the bloodthirsty rabble. Rather than help sort things out, our heroes make for the other side of the wall to see what’s out there. Tris (Shailene Woodley) is joined by her boyfriend Four (Theo James), her lanky brother Caleb (Ansel Elgort), her friend Christina (Zoe Kravitz), and the duplicitous Peter (Miles Teller). Evelyn wants them back, but she must contend with Johanna (Octavia Spencer), who wants peace so badly she’s willing to fight Evelyn’s power-hungry new order to get it. (Also, somehow, during a few minutes between the end of Insurgent and the beginning of Allegiant, Tris got a new haircut and style. That’s not a plot point, just an observation.)

Anyway, after navigating a desert (which Caleb observes, “Looks radioactive”) and finding yet another wall (this one of the force field variety), our heroes are picked up by soldiers in futuristic gear. They’re introduced to the Director of the Bureau of Genetic Welfare, named David (Jeff Daniels, in full post-Sorkin mode). David explains what it’s taken three films to learn: Some time ago, the government’s genetic experiments to eliminate undesirable traits (think Gattaca) went bad, somehow leading to a nuclear war. These genetically modified people, called “Damaged”, were captured and enclosed in Chicago, and the faction system (Amity, Abnegation, Candor, Dauntless, and Erudite) implemented to create peace. The Powers That Be hoped the genetically modified DNA would heal over time and result in Divergents. Turns out Tris was the only success story of their otherwise nonsensical hunch-of-a-plan—meaning, she’s just a normal person like you or me. Nevertheless, David, like Evelyn, is just another Janine, obsessed with his elitism and willing to take drastic measures to cleanse Chicago. Not if Tris has anything to say about it.

With the setup frustratingly thin and riddled with plot holes, Allegiant had better be mindlessly entertaining or contain dynamic characters, but it isn’t and it doesn’t. Granted, the filmmakers have gone to great lengths to incorporate plenty of new sci-fi gadgets and vehicles to divert our attention. And there are lots of CGI battles fought on land and in the air. But Tris and her compatriots have stopped growing as characters; they merely have another battle to fight against a suspiciously similar foe. Allegiant has nothing new to say about Roth’s dystopian, Big Brother world, other than replacing Janine with a villain whose goal is genetic purity rather than social uniformity. Either way, they’re trying to oppress individuality. And because Tris and company are essentially fighting the same fight as before, none of it registers on any meaningful level.

After his flat directorial turn on Insurgent, helmer Robert Schwentke improved the pacing this time around by keeping our attention with mindless plot turns. The screenwriters keep Tris and Four tumbling from one set piece to the next, facing suspiciously familiar conflicts as previous entries. “You don’t see that you’re making the same mistakes all over again,” Tris says at one point, in a speech Woodley couldn’t appear less interested in giving. Based on this exchange, the filmmakers were evidently aware of how repetitive their story was, but they chose not to enhance the emotional stakes for Tris and Four. Allegiant‘s characters have almost no purpose in the story, other than to serve as pawns in the filmmakers’ detached conflict. By the time David schemes to wipe everyone’s memories by flooding Chicago with orange gas by helping Evelyn win her civil war, the unintentionally funny scenes of people running away from CGI plumes are the last straw.

Allegiant looks bad and plays even worse. Because of the redundant plotting and the short production time of one year, no one in front of the camera or behind it seems to care much about what’s going on or how it looks. The green screen work is laughably obvious, especially in a sequence where our heroes are carried off in floating “plasma globes”. This series, along with The Maze Runner, drops its protagonists in the midst of vast dystopian conspiracies and rebel wars, but never creates any drama. Every visual inadequacy and story redundancy could be forgiven with firm emotional stakes for its characters. After all, the Harry Potter and Hunger Games films were arguably repetitive and held some embarrassingly bad CGI moments. But they had sure footing for a dramatic pull. Allegiant builds to a finale that feels less like the culmination of three films than a last-minute justification for another sequel in an overlong, unwanted franchise.