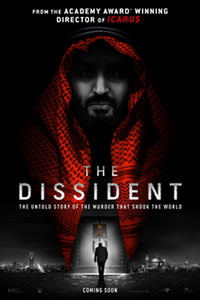 What chance does the value of human life have against the sway of money and power? Not much. That’s the lesson driving Bryan Fogel’s latest documentary, The Dissident, about Jamal Khashoggi, the Saudi Arabian journalist whose gruesome assassination was orchestrated and carried out by his homeland’s government on October 2, 2018. Fogel’s intimate portrait of Khashoggi and what he was fighting for reveals the person behind one of the most upsetting stories in recent years. It also exposes how and why the Saudis murdered him when, at the Saudi embassy in Istanbul, Khashoggi went to pick up some documents for his upcoming marriage. Laying out the facts in clear and fascinating detail, Fogel draws from home footage, social media exchanges, written transcripts, and interviews with experts to shed new light on the story, which feels more urgent than ever. Through this aching story about how a draconian power silenced a voice of defiance and disagreement, The Dissident gets to the root of why the fight for democracy remains constant.

A longtime “insider” in the “family business” of the Saudi government, Khashoggi was hopeful about the future of his country, even the initial freedoms given to the people—such as the right for women to drive—by Saudi Crown Prince Mohammed bin Salman, known as MBS, the power behind the throne. It didn’t take long for Khashoggi and others to recognize that MBS was not unlike Vladimir Putin, doling out trifling gestures of goodwill to the people while tightening his grip. When MBS seized eleven Saudi princes and other VIPs in a palace coup in 2017, he ensured that his voice was the only one that mattered. Khashoggi became increasingly vocal against MBS and disenchanted with the prospects of free expression for Arab people under his rule, and rather than be silenced, the journalist eventually settled in Washington, D.C., where he wrote for the Washington Post with headlines like, “Saudi Arabia Wasn’t Always This Repressive. Now It’s Unbearable.” Fogel paints a frightening picture of what it meant for Khashoggi to go from the inner circle to an outspoken critic by detailing the Twitter death threats and eerie invitations to return home.

To be sure, much of The Dissident revolves around social media, involving the Saudi government’s plan of hiring a small army of fake users called “The Flies,” each managing ten to twenty accounts, to propagandize the eighty percent of the country’s population using Twitter. Much of this we learn from Omar Abdulaziz, another dissident who lives in Montreal, whose YouTube videos made waves with Saudi officials. Abdulaziz led a counter-movement, called “The Bees,” to expose the Saudi government’s scheme of manipulating social media with propaganda. Fogel’s method of portraying this online battle is through banal CGI animations between flies and bees in a Matrix-like digital setting, suggesting a kind of Pixar movie that blends A Bug’s Life with the anthropomorphization of what’s trending. Even so, what Fogel uncovers from talking to CIA officials, cyber-terrorism experts, and Turkish intelligence is amazing and shocking—not the least of which are text messages sent from MBS to Jeff Bezos’ phone containing spyware, which was later used to leak information to tabloids about Bezos’ extramarital affair in retaliation for halting a business deal in the wake of Khashoggi’s death. If you’re not afraid to piss off the richest man in the world, you’re not afraid of anything. 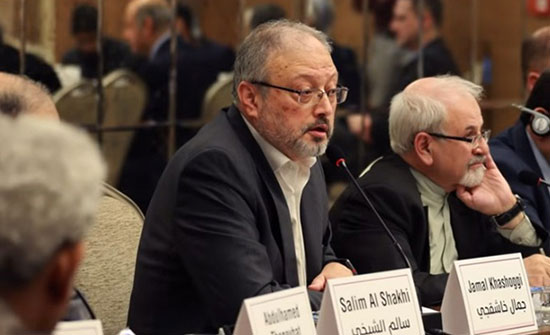 That’s the scary and unsettling part—how MBS ultimately gets away with murder and manipulation. Despite all this, America and other countries around the world continue to do business with Saudi Arabia. After Khashoggi’s murder, there were calls in Congress to stop an impending arms deal, but Donald Trump pushed it through. Taking their cue from the U.S., other countries continue to sell weapons to them as well. Even Jeff Bezos wasn’t deterred from doing business with Saudi Arabia. When the Almighty Dollar is your God, all else, including humanitarian causes, comes secondary. With that in mind, major studios and streaming companies were undoubtedly fearful of reprisals and declined to pick up The Dissident for distribution, despite Fogel’s last film, Icarus (2017), earning the Oscar for Best Documentary and inciting real change when Russia was banned from the 2018 Winter Olympic Games. Briarcliff Entertainment, a small distribution company versed in Liam Neeson actioners, took the commendable risk, whereas Netflix and Amazon shied away from the controversy.

Taken for its story alone, The Dissident plays like a paranoid 1970s thriller similar to The Parallax View (1974), where governments conspire to cover up a conspiracy by resorting to murder. That genre has become achingly relatable in recent years, as fascistic governments around the world attempt to gain control over their people through invasive oversight and manipulation. The events that inspired films like Three Days of the Condor (1975) and Blow Out (1981) have once again started to saturate our news feeds. Maybe in a few years, we will begin to see an influx of new thrillers that reflect the rampant mania of Trump’s America. For the moment, stories like Khashoggi’s death resemble our fiction to a disturbing degree. Using audio transcripts from the scene of the crime supplied by Turkish intelligence (from recordings whose origins are never satisfyingly explained onscreen), Fogel reveals grisly details about Khashoggi’s suffocation, dismemberment with a bone saw, and the seventy pounds of meat used to cover up the smell of his burning body. It can’t help but feel like a scene out of a grim political thriller.

The coverage of Khashoggi’s death emerged in the news frenzy of the last few years, competing with 2018 stories about America dropping out of a nuclear treaty with Russia, escalated warnings about climate change, a trade war between America and China, and countless humanitarian crises. From the outside, one can process only so much, remain enraged about one story for only so long before moving to the next headline. But even those who followed the coverage of Khashoggi’s death closely will be left shaken and disturbed by Fogel’s account. He connects the dots in ways that many news outlets did not, balancing the big picture with the human details. As much as returning to that particular news cycle may seem unappealing, The Dissident remains essential viewing, a story that demands to be seen and admired for its fearlessness. Despite Fogel’s occasionally broad approach, his willingness to express a potentially dangerous message by humanizing Khashoggi and criticizing MBS should be celebrated as freedom of expression in action.